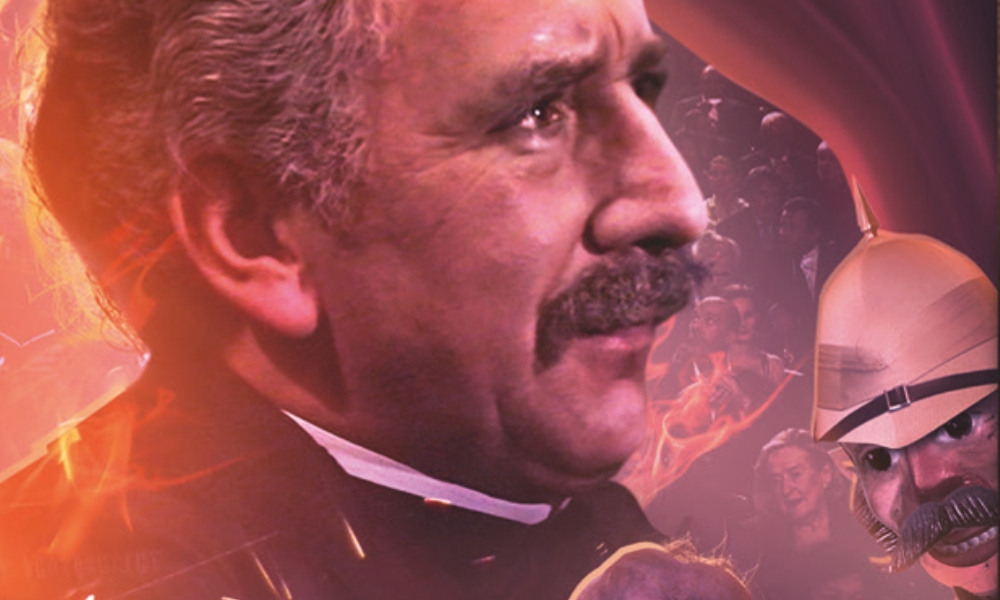 The end of Series Seven of Jago & Litefoot: Investigators of Infernal Incidents ended on a cliffhanger, as usual: in this case, the arrival of the Scorchies, performers of Jo is Making a Thing, a well-loved song here at Unreality Towers. Series Eight picks up some time later, with the puppets a well-entrenched act at Jago’s theatre, and Litefoot and Ellie starting to worry that their friend is maybe a little bit too beholden to his new act…

I suppose it was bound to happen eventually, but after a series of highs for Jago & Litefoot, I found that this series was not quite up to the usual standard, which might just be praising with faint damn. The box opens with James Goss’s Encore of the Scorchies, a full-on musical extravaganza; while the Companion Chronicle that introduced the Scorchies features just two songs (each repeated once), Encore of the Scorchies features around ten by my count! I think less may have been more in this case — only about four of them really stand out, and because there are so many songs, the plot really crawls along. The best songs in a musical, I think, reveal something about character as they are performed, and that wasn’t always the case here.

As a result, the best of the songs included I’ve Been a Fool, a tour de force performance from Christopher Benjamin as Jago, expressing his sadness at how the situation with the Scorchies has unravelled and endangered everyone around him, and Lisa Bowerman’s I’ll Never Get a Spin-Off, which brings the whole thing to a knowing climax (“I’m used to pulling pints although I never pull my punches / I’m just as happy fighting as I am when serving lunches”). Belying my previous statement, though, the other two songs that really worked for me were the ones that went for full-on horror: the Scorchies’ delighted rendering of The Laughing Policeman and Habeas Corpus work fantastically, combining upbeat songs with macabre material.

Kudos to Howard Carter for scoring all of this with great skill (as well as his contributions to the song-writing), and to the whole cast for selling it marvellously. There are other fun bits, too, of course, especially the way that Litefoot interacts with the Scorchies. On the whole, though, this doesn’t hit the heights of previous Big Finish musicals like Doctor Who and the Pirates, or other examples of musical episodes of genre series (like Buffy’s famous Once More, with Feeling) mostly because it just doesn’t have the emotional resonance. There are songs, but too many of them are nothing more than songs.

The rest of the set is made up of a number of middle-of-the-road adventures, nothing quite as solid as The Monstrous Menagerie, The Night of 1000 Stars, The Skeleton Key, or Return of the Repressed from the last couple sets. The Backwards Men brings back Andy Lane, Jago & Litefoot’s founding father who’s been absent since Series Three, but the story is a little too science-fictional for Jago & Litefoot, and not particularly Victorian. There’s a great horrific image, but little else to hang on to here.

Simon Barnard & Paul Morris’s Jago & Litefoot & Patsy quickly established itself as my favourite here. I guess Flaminia Cinque’s Patsy previously appeared in Series Seven, but I don’t remember her; anyway, she’s an old crone, a mudlark who finds a giant fish and ends up helping Jago and Litefoot in their investigations into a mysteriously factory. Cinque is great, as are the reactions she engenders in the main cast — by and large she’s a comic character, but there are some very effective dramatic shifts, too. Barnard and Morris demonstrate their usual wit, especially in a scene where Jago and Litefoot find out a man was simply too nice to be murdered. On the other hand, I found the climax somewhat weak; it transpires, like seemingly too many Jago & Litefoot climaxes do, with little input from the main characters.

Finally, there’s Higson & Quick from Justin Richards, a direct sequel to the previous story while pushes the barmaid and the police inspector into the spotlight when Jago and Litefoot go rogue. This is fun, but perhaps never quite fun enough given the premise, nor quite serious enough, either. It’s an interesting idea, but the villains of the piece don’t really resonate, meaning the whole thing never quite comes together.

There’s nothing terrible about this set: it took Jago & Litefoot a while to get going in my opinion, and this box is akin to the quality levels of the first three or four. But after a series of very strong boxes, it’s disappointing to return to previous form. I do feel that Benjamin and Baxter were not quite as well served by this as previous boxes; outside of the songs, there’s not as much for them to really dig their actorly teeth into as usual. But the ending promises excitement to come, and so I’ll be there as always for Series Nine.