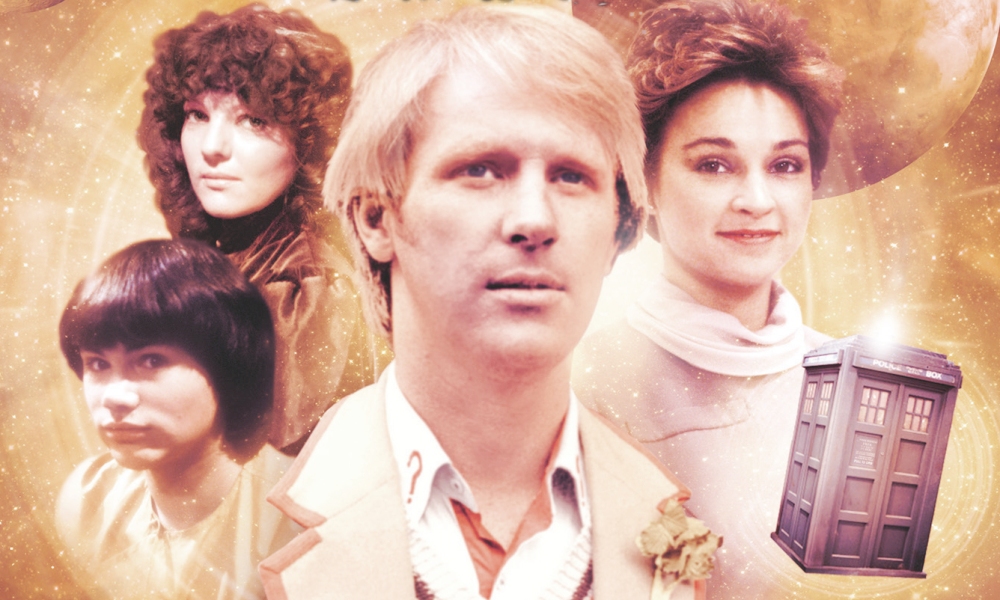 Forgive some autobiography: when I became a regular viewer of Doctor Who, it was through watching reruns on my local PBS station. The first I saw, I believe, was Part Two of The Invisible Enemy, and so Doctor Who as I understand it unfolds from there. But though Seasons 15 through 17 have their high points (The Invasion of Time, The Ribos Operation, The Armageddon Factor, City of Death, Nightmare of Eden), they never fully clicked for me. Good enough to watch, but not appointment television. Everything changed for me with Season 18; with The Leisure Hive, I found that Doctor Who became a show I had to own. And then, with Season 19, Doctor Who got even better with the creation of one of Doctor Who’s two greatest TARDIS crews: the Fifth Doctor, Adric, Nyssa, and Tegan. (The other one, if you’re wondering, is the original.)

The Fifth Doctor, Adric, Nyssa, and Tegan are one of Doctor Who’s greatest TARDIS crews

It’s a perfect combination: the Doctor’s exasperation but good intentions, Adric’s lack of social graces but intelligence, Nyssa’s quiet tragedy but steady competence, Tegan’s brashness but morality. I can’t say I love every story they appear in, but they all burst with energy, and Castrovalva, Kinda, and Earthshock are all genuine ten-out-of-ten classics on my Doctor Who Magazine survey entry sheet, and there’s a lot to like about The Visitation and Black Orchid, too — especially that last one, which gives the TARDIS crew a chance to relax and engage with each other without having petty arguments.

So it was with some excitement that I approached the release of The Fifth Doctor Box Set, which sees the return of Matthew Waterhouse as Adric to the Doctor Who fold. Peter Davison and Sarah Sutton have been working for Big Finish since the beginning, of course, and with Janet Fielding joining up in 2010, that means it’s finally possible for us to get some full-cast stories with the Season 19 TARDIS crew. The Fifth Doctor Box Set contains two four-part stories: Psychodrome by Jonathan Morris, set at the season’s beginning, between Castrovalva and Four to Doomsday, and Iterations of I by John Dorney, set near its end between Black Orchid and Earthshock.

Psychodrome is a very character-driven story, picking up a lot of loose threads

Psychodrome is a very character-driven story, picking up a lot of loose character threads from a number of the stories that immediately preceded it: Full Circle, The Keeper of Traken, Logopolis, and Castrovalva are of especial importance here. The Doctor must deal with being a new man, while all three of his companions must deal with losses of various sizes, from Adric losing the man he thought the Doctor was, to Nyssa losing her entire planet and civilisation. There are great scenes that we never got on television: the conscious acceptance of this new Doctor by his companions, good interactions between Adric and Tegan especially. Morris is brilliant in how he extracts what was potential in these characters’ original stories but never quite actually realised, in the best Big Finish tradition. There’s even some cleverly done and pretty poignant forward references to stories such as Earthshock too. (Also: the absolutely delightful secret origin of “Brave heart, Tegan”!)

Morris cleverly makes the characters’ anxieties the actual plot of the play in a way that I won’t spoil, but you’ll probably work out pretty quickly — don’t worry, though, because the characters aren’t too far behind, and the story takes the basic tenets of this old premise into some pretty interesting and unusual places. There are some good twists and turns, and Morris turns the repetition of some of the concepts in Season 18 (crashed spaceships, ruling triads, etc) into a virtue here with his own echoes of them. The guest cast, too, does a reasonably good job, even though (or perhaps because) its members are all called on to play multiple members of a sprawling cast, but Morris turns that into a surprising and entertaining virtue as well. Psychodrome slots seamlessly between Castrovalva and Four to Doomsday, and makes watching either of them a richer experience. (Well, except for the fact that Adric offers Romana’s old room to Tegan, but the Doctor jettisoned it for power in Logopolis!)

Iterations of I bridges old and new, telling a story of a type we never saw in the early 1980s, in a style characteristic of the time

Iterations of I takes a slightly different approach, focussing less on slotting in continuity-wise, and more on just being a cracking good adventure with these characters. Seemingly, the story’s basis is “What if Christopher Hamilton Bidmead commissioned a haunted house story? It’d be about maths!”. Smartly, the story bridges old and new by telling a story of a type we never really saw in the early 1980s in a style characteristic of the time. The sense of isolation, of desperation is expertly built up across Part One, especially, as things get harder and harder for our protagonists. John Dorney, amazingly, transforms the square root of minus-one into one of the most terrifying things you’ve ever heard, while at the same time keeping all of the characters squarely in focus: this is the Doctor, Adric, Nyssa, and Tegan at their best, a team that clearly works well together but also bickers in the way that people will do, striking a balance not quite in the emotional range, one suspects, of Eric Saward. The first two episodes are this story’s strongest; it definitely flags somewhat as it goes on and is forced to explain and justify itself, and maybe what emerges as the final threat is not quite as terrifying as the original one.

Peter Davison could clearly play the Doctor in his sleep (and maybe has, in some stories, but not these), but he gets some particularly juicy stuff here: there are parts where he comes across as genuinely hurt at how his companions view this new version of himself, but on the other hand, he’s quite funny at times. We’ve heard enough of Sarah Sutton and Janet Fielding in Big Finish to know how easily they can recreate the voices of Nyssa and Tegan, but kudos as usual: both are always great to listen to, and Sutton especially gets to play a lot of the tragedy of character very effectively. Matthew Waterhouse perhaps has the biggest challenge of these four, though, as his voice has changed the most since 1982. He pitches his voice upwards to compensate, sometimes resulting in an unnatural sort of ethereal sound, though after listening to four discs, I got used to it, and he’s recognisably enough the Adric of old. Listening to the extras, though, one suspects he might be better off just using his natural voice, which though different, is less jarring.

The sound design is meticulous and perfect

All of this era-recreation is aided and abetted by the delicious musical stylings of Steve McNichol and Kelly Ellis. Ever since they came to my attention with Army of Death, I’ve noted the Paddy Kingsland stylings; never were they more appropriately deployed as here. (And, as thankfully seems to be becoming de rigueur for Big Finish’s Doctor Who box sets, four tracks of music suites are included.) Their sound design, too, is meticulous and perfect, especially in capturing the horror in Iterations of I. And who doesn’t love those squeaking trainer sound effects they give the Doctor’s movements!

Those of you who have read my ferociously negative reviews of Big Finish’s Fourth Doctor Adventures might wonder at my hypocrisy at praising an exercise in nostalgia, but I think that The Fifth Doctor Box Set is more than that: it uses the trappings of its era, yes, but it deploys them to tell two stories that it’s impossible to imagine John Nathan-Turner and his script editor(s) actually commissioning and putting on television. At the same time we get something old, we get something new, and I can’t hope for anything better from Doctor Who at Big Finish than that. Hopefully we get a lot more from this team in the future!