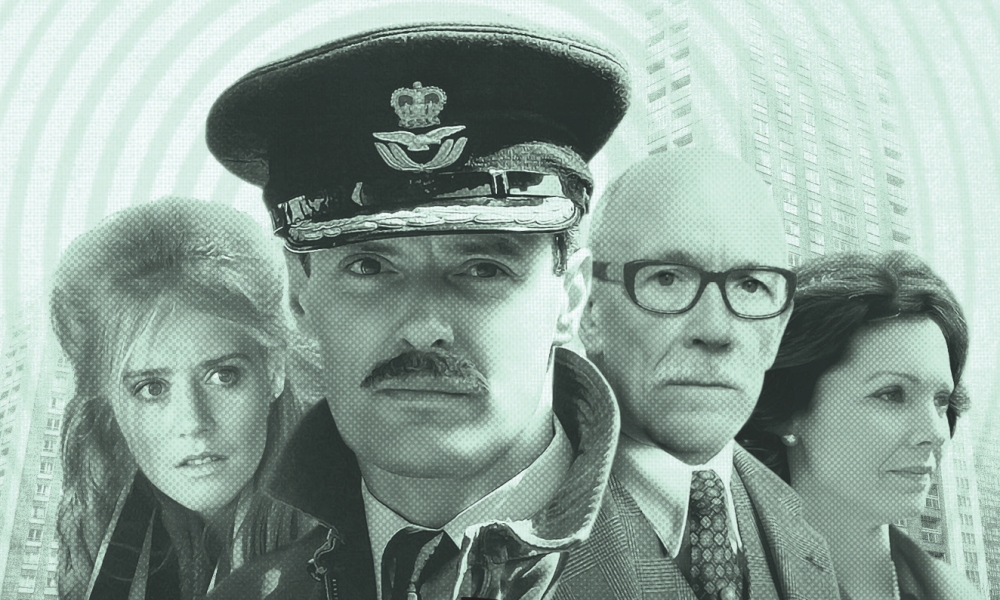 Earlier this year I investigated the first two series of Big Finish’s Doctor Who spin-off Counter-Measures; now, the third one is out, picking up from the end of the second (which saw Counter-Measures backer Sir Toby Kinsella outed as not quite nice), with Toby at an inquiry while his team struggles to keep things running under temporary boss Templeton.

Matt Fitton’s Changing of the Guard sees us off, with the above inquiry running alongside the ICMG’s investigation of an East End gangster with the astounding power to get around a whole lot. I was kind of disappointed in the way the fallout from the Series 2 finale was handled: we see very little of the team’s reactions to Toby within the story itself. It starts out with Gilmore being okay with him, and I assumed that was the same for the whole team — it wasn’t until the second story that I realised that Allison doesn’t trust him at all anymore. I wish these reactions could have been foregrounded some more, as they ought to be the real meat of this. Also, Templeton is such a ridiculous caricature of a character, written to do exactly the worst possible thing at any given moment, to make Toby seem the better alternative. (Unless… that’s deliberate on his part, not just the writers’… Hm…) The gangster plot is never going to set anyone alight, not even considering it feels like a repeat of Matt Fitton’s own Afterlife from last year.

The best story here is Unto the Breach: lots of Cold War paranoia, wheels within wheels, all sorts of good stuff

With the team reunited, Justin Richards sends them back into the field for The Concrete Cage. This wants to be a ghost story, but it doesn’t really succeed — I wasn’t spooked, whether that’s down to writing, direction, or sound design. It doesn’t help that the story is pretty repetitive, with the team seeing the same things again and again. Plus Rachel keeps on banging on that there can’t be an actual haunting, there must be a “rational” explanation. Which is fair, except that her definition of “rational” is “could happen in the real world 1960s” for some reason. This woman has fought Daleks and seen aliens from another dimension teleport in to assassinate the Prime Minister! When you do find out what the ghosts are… well, it’s such a load of technobabble nonsense you wonder why they bothered to do anything other than say “a wizard did it”.

Longtime Big Finish director Ken Bentley turns his hand to writing for the first time with The Forgotten Village, which sees the eternally dumped-upon Allison back to her hometown. I liked this. The first two stories in this set aren’t very character-driven, so it’s nice to bring some focus on Allison as a person and in terms of her past. Karen Gledhill rises to the occasion very well. The story feels a little aimless sometimes, though, and the ending is confusing.

The best story here is John Dorney’s Unto the Breach, where the team must investigate an alien creature on the other side of the Berlin Wall. Lots of Cold War paranoia, wheels within wheels, all sorts of good stuff. (Though there’s so many layers to this conspiracy I’m not entirely convinced it makes sense. I suppose I’ll find out next season!) Bar some sloppy plotting (a character shoots his way through a checkpoint, but when he crosses back over no-one seems to think he’s out of the ordinary; another tells border guards someone is a spy and they arrest on their say-so but don’t bother to ask why that person knows), this is cracking. Double and triple agents, people bundled into cars, Sir Toby flirting with female clerks, Ian and Rachel and Toby pushed to their limits. And meanwhile, poor poor Allison.

The main characters are, as always, well acted. I still can’t get a handle on Hugh Ross’s Sir Toby — in a good way! I’ve mentioned Gledhill, but Simon Williams and Pamela Salem get good material as Gilmore and Jensen, especially with one another. I do have to complain that three of the four stories here see Toby accompanying the Counter-Measures team into the field, which is more than the case in the previous series. What’s the point of taking the unusual step of making Rachel the leader if Toby is always going to be right there with her, giving orders? It’s a waste of an interesting idea, and it prevents Rachel from shining. Toby doesn’t add much to The Concrete Cage and The Forgotten Village with his presence; I’d’ve liked to have seen him held back for the finale.

Those moments that I think Counter-Measures is at its peak is when it feels of its time — otherwise, why bother to do it? I loved those “social control” stories in the first series, and the Cold War informed much of the second. Series 3 slides back from this, though, and the series is the worse for it. The first three stories could all be Jago & Litefoot for all that they make genuine use of the 1960s setting, and that’s unfortunate, because that audio in “black and white” thing is the unique selling point of the series. Now, I’m not saying these stories are terrible, but Series 3 is unfortunately not Counter-Measures at its best. The ending promises Series 4 to be a return to form; hopefully that’s true.