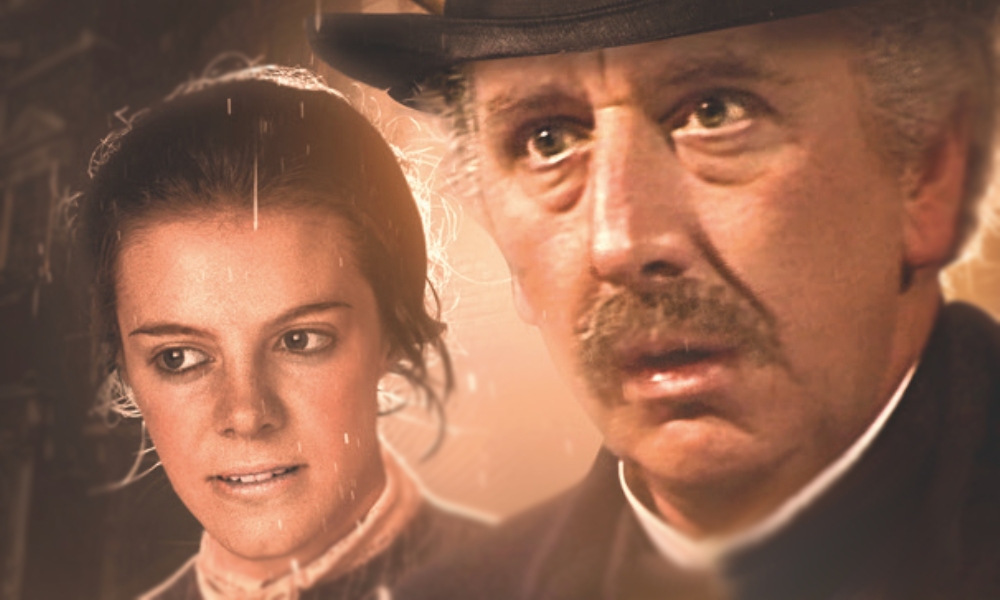 In my review of Series Six of Jago & Litefoot, I said it was “a consolidation of sorts that results in some of the best Jago & Litefoot yet”. Well, I’m pleased to report that Series Seven — despite its slight revision of the format with Jago and Litefoot going on the run — is a continuation of the high standard set by the previous series.

We begin with The Monstrous Menagerie by Jonathan Morris (writing his third series opener in a row!), as the investigators of infernal incidents try to figure out how to live life on the run, with a little help from Ellie, one Claudius Dark… and Arthur Conan Doyle! Yes, it’s Jago & Litefoot meets Sherlock Holmes, sort of. Like Morris’s The Skeleton Quay from last season, this one is just a perfect delight: the characters move from hijink to hijinks quickly and briskly, and there are some great mysteries with even better payoffs. Doyle himself is an utter delight: this is set during the period where Holmes was “dead” (between The Final Problem and The Empty House), and Doyle is sick and tired of people asking him when Holmes will come back. It’s funny writing and a strong performance from Steven Miller. And the conceit of the ending is an utter delight! A perfect Jago & Litefoot story.

The Night of 1000 Stars by James Goss fills the “out there” story slot usually occupied by Matthew Sweet. Goss gives us a tale of Jago, Litefoot, Ellie, and Leela in seeming real time, as they try to stave off a beast Leela has come back from Gallifrey to fight. It’s an unusual story, but I think it works, layering on new depths to our principal characters, all of whom rise to the occasion (of course). We especially discover new angles of Lisa Bowerman’s Ellie. Inventive and entertaining and incredibly well-performed. What a cast this series is blessed with.

To my delight, Simon Barnard and Paul Morris of The Scarifyers fame make their Jago & Litefoot debut with Murder at Moorsey Manor, an odd story somewhat reminiscent of the Clue movie. Trying to prove their innocence, Jago and Litefoot track down the man who can do it to Moorsey Manor, where a group of Sherlock Holmes aficionados are meeting on the anniversary of the Great Detective’s death. But soon they’re caught in a bizarre plot as their members are picked off one by one… This one is goofy and grotesque in the best Scarifyers tradition, and I enjoyed laughing and being grossed out in turn.

Weirdly, for the script editor, Richards has a tendency to write Jago and Litefoot as caricatures

The only story to let this set down is the finale, Justin Richards’s The Wax Princess. Weirdly, for the script editor, Richards has a tendency to write Jago and Litefoot as caricatures instead of characters, such as a scene where Jago is more interested in beer than helping solve a murder, and his overly timid Litefoot has to be told what to do by Ellie far too many times. On the other hand, there’s an utterly fantastic scene where Litefoot has to impersonate Jago, and Trevor Baxter rises to the occasion perfectly. The plot of this one is pretty good up until the end, until we’re asked to believe a number of far-fetched things, and an actress who’s not credited on the website turns in an utterly misjudged “comedy” performance as Queen Victoria in what it is supposed to be a serious and even moving scene.

In my review of Series Six, I closed by saying, “When Jago & Litefoot began, I enjoyed the characters and format, but often found the individual stories weak. But here, by Series Six, Big Finish has really cracked it — each of these stories works, thanks to good writing, clever reinvention, nice direction by Lisa Bowerman, and Howard Carter’s detailed sound design/atmosphere. Oh, and the best leads you could possibly imagine in Christopher Benjamin and Trevor Baxter. The end promises a highly enjoyable Series Seven to come, and as ever, I will be there to hear it”. I have nothing new to say this time except that Series Six was not a fluke; Series Seven shows they really have cracked it, and I am looking forward to Series Eight immensely, and I hope these stories go on and on and on…