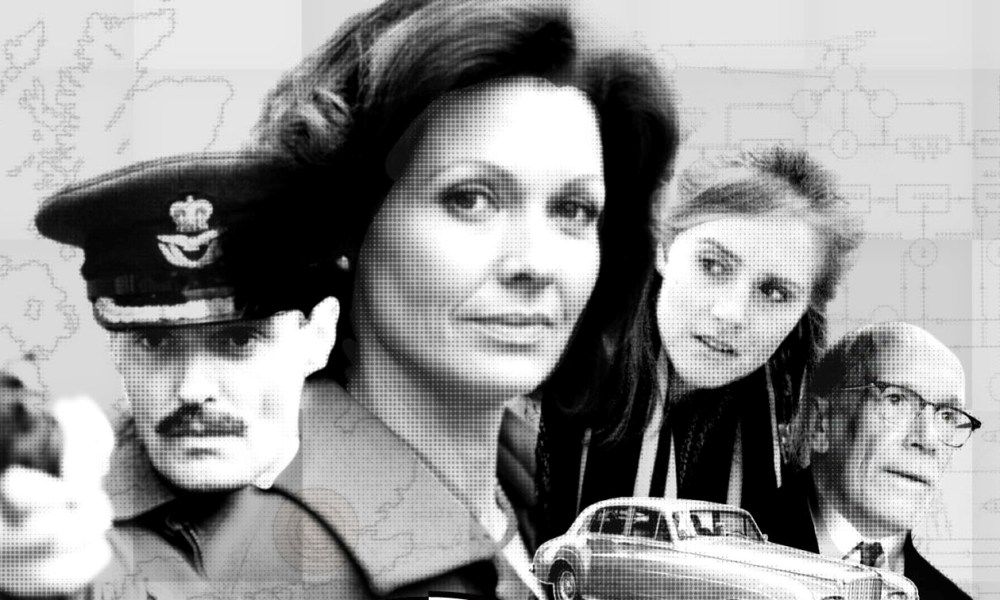 Picking up from the conclusion of the Doctor Who audio drama The Assassination Games is Series 1 of Counter-Measures, a new spin-off featuring the members of the Intrusion Counter-Measures Group of Remembrance of the Daleks fame. Like Jago & Litefoot, Counter-Measures gives us a series of four-disc box sets, each one of them comprising four little adventures for its heroes. I’ll admit that when the series was announced, I was a little dubious, but in a world where Vienna can happen, almost everything else seems reasonable by comparison.

Counter-Measures takes place in early 1964, with the ICMG fighting for funding, the events of Coal Hill having not quite proved their worth. (It doesn’t quite track with the end of The Assassination Games, but given they were written out of order, it’s hard to nitpick too much.) The team here are the personnel of Remembrance — Simon Williams as Group Captain Ian “Chunky” Gilmore, Pamela Salem as Professor Rachel Jensen, and Karen Gledhill as Doctor Allison Williams — plus their supervisor, Hugh Jones as Sir Tobias Kinsella. Together, they investigate the unexplained, the unusual, sort of a proto-UNIT.

Counter-Measures taps into the 1960s brilliantly

The first story, Paul Finch’s Threshold, sees the team reuniting for the first time since Rememberance in order to investigate an accident at a seemingly abandoned factory where research was being done into teleportation. It maybe won’t set any high marks for originality, but it turns out to be a reasonably engaging story of supernatural investigation with a science-fiction twist, nicely setting up the operating parameters of Counter-Measures — which aren’t quite what you’d expect.

Matt Fitton’s Artificial Intelligence and Ian Potter’s The Pelage Project are maybe both more typical of the series. I don’t know what it was actually like in the 1960s, but judging from The Prisoner, everyone was always very worried about attempts at “social control”, and Counter-Measures taps into these brilliantly with these two stories. The first concerns a project to build a telepathic computer so that the UK can contact field agents without detection, while the second investigates a closed-off factory community with an unusual aim. Both of these stories are pretty unsettling in their own ways, and everything comes together perfectly: writing, casting, and sound design. For example, Stephen Greif (who I know only as Space Commander Travis from Blake’s 7) turns out to be amazing as Ken Temple, self-made industrialist in The Pelage Project. Potter resists easy outs with the character, such as making him hypocritical or manically insane; Temple is simply an intelligent man who has identified a solution to the problems of the modern world and is determined to carry them out — which is all the more scary.

Everything comes together perfectly: writing, casting, and sound design

Justin Richards brings the box set to a close with State of Emergency. If there’s anything I like, it’s stories of coups — there’s this whole marvellous feeling of this could happen and you couldn’t stop it to them, and State of Emergency captures that perfectly. As events started to accelerate, I found myself becoming completely engrossed in the proceedings. Good coup stories create a feeling of paranoia and fear and the slippery moral slope, and I felt like State of Emergency nailed it. I’m too young and too American to have any idea what Prime Minister Harold Wilson was like, but Duncan Wisbey (Doctor and/or Detective Sacker in Jago & Litefoot) turns in an excellent performance as the man: resolute, intelligent, principled, pragmatic. There are some real punch-the-air moments in this one, where I was cackling with glee at the actions of our clever heroes. Undoubtedly the best of a strong bunch.

The weaker moments of the series (not that there are a lot) are always carried by our castmembers. Simon Williams is great as Group Captain Gilmore — he could easily be a Brigadier knock-off, but Williams and the writers are better than that. He’s no-nonsense to be sure, and a fundamentally decent fellow, but he’s a little less of a stick-in-the-mud than the Brigadier could be; tell him what’s got to be done, and he will hop right to it. There’s also a sense that he’s a wounded man, but this wisely isn’t overplayed; it’s just a touch of background to his character.

Pamela Salem gets to shine as Rachel Jensen, occupying an unexpected role on the team. Intelligent and passionate, she is strongly principled, but the scripts wisely avoid her becoming laden in technobabble, and she keeps a solid head in a crisis. Like with Gilmore, there’s a backstory hinted at but undwelt on; she obviously isn’t a very happen woman, but she’s not going to let that bother her too much.

Hugh Ross is a revelation as Sir Toby

Karen Gledhill’s Allison Williams is probably the weak link here, though the actress isn’t at fault. She’s a scientist in her own right, but one doesn’t often get to experience that — she helps Rachel, she flirts with men to help the mission, she displays compassion when appropriate, she has a boyfriend. I like her, she’s sparky, but given the level of age and experience she seems to have, one thinks more could be done with her.

Hugh Ross proves a revelation as Sir Toby. I don’t know his previous work, but he’s amazing here — a smooth charmer, a bureaucrat, but not a pompous or obstinate one: principled yet very pragmatic. I just love the silky way that Ross delivers his every line; he’s just a joy to listen to, and there’s some great stuff seeded for his character here that I hope we see followed up on in future series.

Andrew Fettes plays Lieutenant Carver, the leader of the squadron of troops assigned to Counter-Measures. The skimping of detail here is probably one of the series’ only real deficiencies; there’s not a strong Yates/Benton character to match Gilmore’s Brigadier. You know there are a group of men assigned to the group, but you never really see them, and our regulars seem to have no familiarity or relationship with them, aside from Fettes’s brief turn as Carver.

Finally, Alastair MacKenzie plays Julian St Stephen, Allision’s therapist boyfriend. I really liked the character in Artificial Intelligence, especially in the way he was contrasted with Gilmore. He returns in State of Emergency, and though his role is pivotal, it doesn’t quite seem to line up with what we were told about him in the previous story, even taking into account the necessity of deception.

It’s easy to just praise the sound design in Big Finish dramas and move on — or worse, just take the praise as an implicit assumption. But Martin Montague’s work on Counter-Measures isn’t just good, it’s integral. There are a lot of tannoys, loudspeakers, and communicators here, but they’re not just incidental necessities of the plot, but integral to the stories’ themes of social control and surveillance, and Montague does great work adding to the atmosphere of the stories with all these processed, disembodied voices. The Pelage Project in particular benefits from his work — there’s a deeply chilling scene of a man dying in surgery, positioned from his perspective as everyone just talks around him.

Also, the music on Counter-Measures is some of the best Big Finish music I’ve heard in a long time. Nicholas Briggs doesn’t provide a mock-orchestral score, but electronic noises that are perfect for the medium, permeating the story with electronic unease. It adds to the tone perfectly; alas, there is no music on the slightly-too-long “bonus disc”. Everything comes together, for example, the extraordinarily chilling ending of Artificial Intelligence: numbers are scary! Kudos to Montague, Briggs, and director Ken Bentley for bringing it all together on this one.

If Counter-Measures can keep up this level of quality, it might just be my favourite Big Finish Doctor Who spin-off yet. I like Jago & Litefoot, but though I love the characters, I feel like I often struggle with the actual plots of the stories. Counter-Measures has no such problem. I love the characters, and I love the complicated, spooky stories being told; your own government turning on you (or other people turning on your government) is scarier than a ghost or vampire or zombie will ever be. My only regret about Counter-Measures Series 1 is that it took me so long to get around to trying it out.