Doctor Who: The Mega review 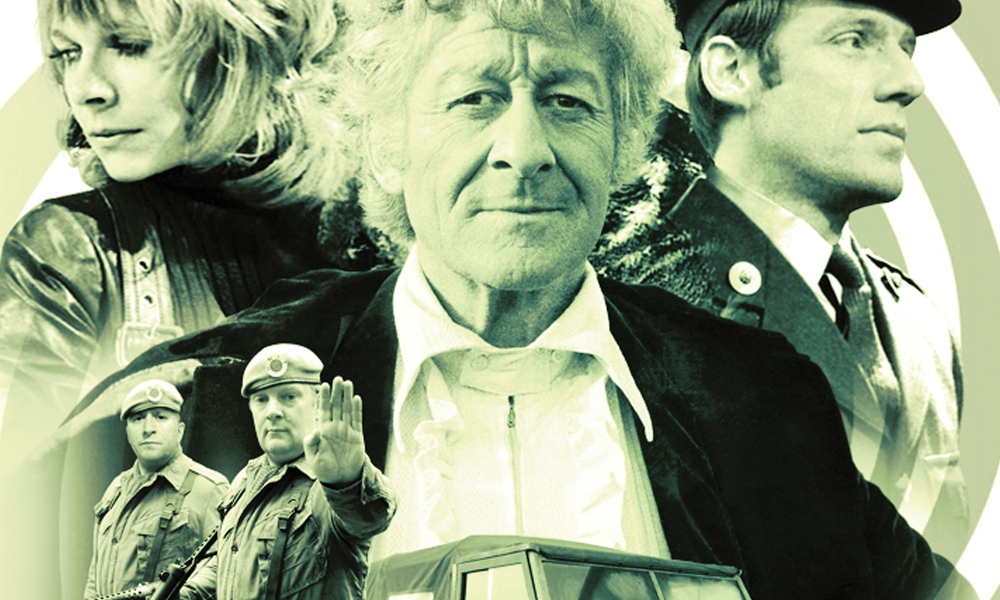 Terrance Dicks famously remarked that the problem with the UNIT format gifted to him in Season Seven was that you could only tell mad scientist stories and alien invasion stories, and the sooner you could pack the Doctor off into space again, the better. Of course, Season Seven actually gives us a series of interesting and varied tales, and so does The Mega. Though it feels very much like it could have been produced during the early Pertwee era (Season Eight, or possibly Season Nine), it also feels quite distinct from any story actually produced then.

The Mega opens grimly, with Captain Yates driving the Brigadier, the Doctor, and Jo Grant to the demonstration of a new gas weapon. (Benton is back at UNIT HQ watching football.) The weapon has attracted unfavourable attention, and they have to drive through a crowd of protestors to get there, before being witness to the horrible weapon. It’s not just British protestors who are attracted by the weapon, but the broadcasters of a mysterious signal that overtakes British television, ordering the West to disarm: if they are developing biological weapons to use on their own countrymen, they are going too far. And to demonstrate their point, they can instantly kill any authority figure who refuses to abide by their terms.

The Doctor suspects alien involvement, and thinks that the unknown attacker’s intentions are good even if its methods aren’t, so he and Jo sneak out of the country while the Brigadier and UNIT are left to watch over the breakdown of British society under the threat of the mysterious attackers. The Mega gives us two parallel stories, both of them tense: the Doctor and Jo in the castle of Prince Cassie, ruler of a principality bordering Austria, trying to change his mind and get a message to UNIT, and the Brigadier and company in an increasingly desperate Britain.

It is in the scenes of the latter that The Mega gives us something we never saw on television: Captain Yates under orders to gas the population, assassinations on live television, Yates and Benton trying to maintain order in the middle of a riot, the Brigadier under investigation and arrest. It’s all very tense, and it pushed the characters to an extent that I don’t remember being done, but it feels very natural. The story develops slowly, but logically; unlike the other six-parters in this season of The Lost Stories, The Mega benefits from its length, to allow the scale and tension to slowly ratchet up as Britain heads further and further into oblivion. I can imagine this as a season finale, easily. I don’t know what the original storyline of Bill Strutton (The Web Planet) was like, but Simon Guerrier has worked magic with it.

Katy Manning does a great job as always, and I really enjoyed her performances as both Jo and the Doctor. On the other side, Richard Franklin is a standup narrator, as he already proved with Vengeance of the Stones, but no great shakes as an impressionist. (Benton is not a huge figure in the story, but it would have been nice to have John Levene back after Council of War.) Bo Poraj and Derek Carlyle fill in as literally everyone else, and do admirable jobs. Richard Fox and Lauren Yason turn in a score that is perhaps not very Dudley-ish, but it’s so perfect at driving up the tension, I can’t complain.

The Mega is The Lost Stories at their best: stories that feel like we could have gotten them, but that aren’t quite like what we did get. It’s been a series with some ups (The Elite, The First Doctor Box Set, The Foe from the Future) and downs (Mission to Magnus, Prison in Space, everything involving Andrew Cartmel), but it’s been a worthy experiment, and I’m glad that its final story (and its only Pertwee) is one of its best efforts yet.