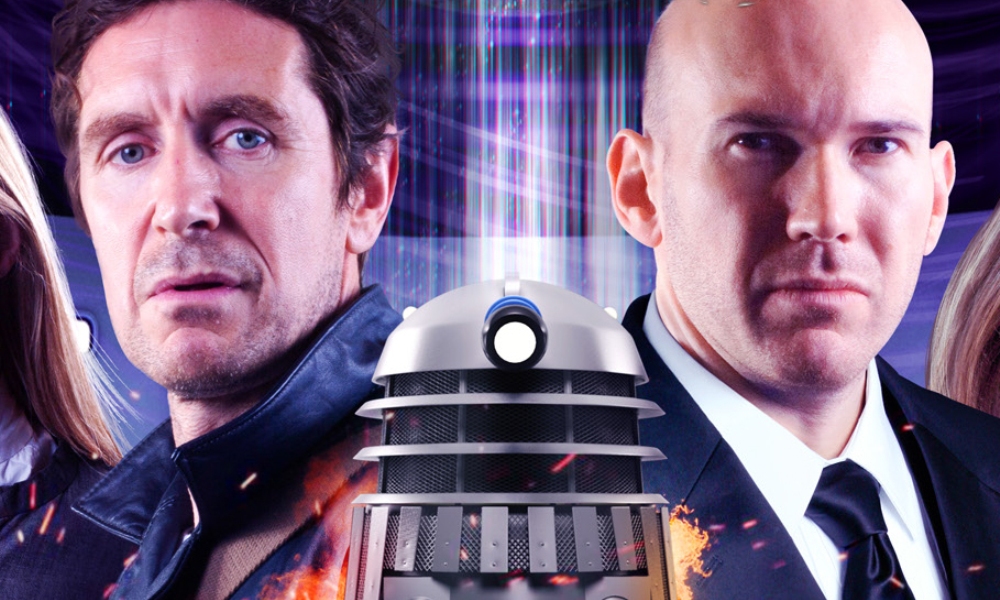 Who would have thought that 2013 would be the year where we’d have Paul McGann as the Doctor on television… and not on audio? Though he may have joined the fray in The Light at the End, it’s been over a year since he starred in Dark Eyes, and so Dark Eyes 2. It’s amazing — back when Storm Warning came out in 2001, the Eighth Doctor was the bleeding edge of Doctor Who, and now he’s four (or five (or six!)) incarnations away from the incumbent! But he’ll always be my Doctor, and I still get that tingle of anticipation when a CD turns up in the mail.

What strikes one on receiving Dark Eyes 2 is what a different approach it is to the original Dark Eyes. Dark Eyes was very much one story by one person told across four CDs, evoking a huge, mysterious scale and pushing the Doctor to the limits of his characterisation. Dark Eyes 2 is more like a box of Jago & Litefoot, with four individual tales by three different writers (Nicholas Briggs, Alan Barnes, and Matt Fitton), linked by some running threads. I’m not sure what I think of this change; part of the appeal of Dark Eyes was how different, how fresh it felt… and, well, aping the structure of Jago & Litefoot is hardly either.

The other noteworthy thing is continuity. Dark Eyes was very light on references to the past. Just the Daleks (and that pesky Dalek Time Controller), Straxus (who was easily grasped as an officious Time Lord the Doctor had met before), and the idea that some great tragedy had befallen the Doctor recently (the details of which were actually pretty vague). On the other hand, Dark Eyes 2 brings back (in addition to the necessary Daleks and Molly O’Sullivan), Liv Chenka, the Viyrans, the Eminence, and the Master, leaning on Robophobia, Patient Zero/Blue Forgotten Planet, The Seeds of War, and UNIT: Dominion, many of which themselves are based in story arcs! But — I think it all works for the most part, and stands alone pretty well regardless. Let’s tackle Dark Eyes 2 element by element and find out…

The Daleks are actually pretty necessary to the story, clearly another bout in the gathering storm of the Time War. They’re necessary to the Doctor’s emotional state; the first story here, The Traitor, opens on a planet under Dalek occupation, and there’s no monster that does occupations in Doctor Who quite so well as the Daleks. That feeling that you’ve been subjugated, you lost, and there’s nothing you can do about it because the enemy is just so implacable and huge: that’s the Daleks at their best. Give me a story where the Daleks have already won over another attempt to conquer the Earth any day. That grim, desperate feeling that permeates The Traitor is perfect for a Doctor increasingly losing his hope in the universe. The only quibble I have is that the appearance of the Dalek Time Controller feels pretty gratuitous, as there’s not really any Time Controlling going on; I feel like its role could have been taken by any old Dalek Supreme.

I’ve actually never heard Robophobia, as I have sequelphobia. Thankfully, you don’t need to know anything about Liv other than that she met the Doctor when he was short and Scottish, and that Nicola Walker is amazing. Seriously, Liv is a very different sort of companion(?), a woman battling with her own personal demons, especially her inability to effect the kind of difference she’d like to. The character is well-written, but Walker gives her some good solid oomph; she feels like a real person in a way that Charley and Lucie and Molly (as much as I love them all) never will. Liv appears in three of the four episodes (The Traitor, Time’s Horizon, and Eyes of the Master), and she really elevates every scene she’s in; I hope she remains as big a presence in Dark Eyes 3 and beyond.

I liked Ruth Bradley’s Molly in Dark Eyes, with the exceptions of her habit… of… reading… letters… home… aloud… painfully… slow and her use of the word (term?) “Tardy-box”. Thankfully, the former is completely gone and the latter gets only the briefest of uses. Someone on the extras opines that Molly is unique as a companion because she gives the Doctor verbal grief, and though that leads me to conclude that this person has somehow never experienced any Doctor Who featuring Tegan, Lucie, Donna, Amy, or (lucky him) Flip, the reason it happens so much is because it works. Molly clearly loves travelling with the Doctor, but can never say so — but her emotional reticence is very different from Liv’s. Whereas Liv clamps down on all her feelings, Molly passionately expresses everything, even if it’s the opposite of what she feels. Molly’s good when she returns in The White Room, but I think where I most enjoyed her was in the scenes in Time’s Horizon and Eyes of the Master where she’s paired with Liv. They make a great team, and they’d better stick together.

She also gets some sweet moments with a World War I soldier David Walker in The White Room and Eyes of the Master. Though if they try to give her a romance with a guy, it blows my Molly-and-Kitty-were-lovers theory all to hell. (There is one oddity here, though it’s a familiar one to anyone who’s seen a Matt Smith episode. At the end of The White Room the Doctor invites Molly on board the TARDIS so they can figure out why something happened to her; at the beginning of Time’s Horizon, they’re acting like she just came aboard for a random spin.)

Yup, it’s everyone’s favourite virus hunters! (Note to other reviewers: the Viyrans, as per Patient Zero, did not create the viruses; they were just brought in to dispose of them.) I’m fond of these guys, mostly for their excellent voices, but honestly they’re probably the straw too many on the camel’s back of continuity; they feel pretty squeezed in. They’re treated a little poorly by the narrative, too — the way they’re outsmarted is pretty silly for a couple of what are supposed to be intelligent beings. Still, that voice effect is great, Ian Brooker’s voice is well suited to it (shame his other role here is yet another crazy scientist), and I look forward to their appearance in From the Memoirs of an Edwardian Adventuress in a couple months.

I was not a fan of The Seeds of War, to put it mildly, so I was not looking forward to the return of the Eminence in Dark Eyes 2. Thankfully, they are a little more interesting here than they were there, with a pretty cool origin revealed for them. Unfortunately, this origin doesn’t really add a whole lot to them — they’re still just a guy (David Sibley, to be specific) growling with an effect on his voice. Really, it’s their utterly mundane WE SHALL CONQUER THE UNIVERSE dialogue that lets them down; I feel like the great concept here calls for a more interesting execution. Still, I’m mildly more interested than I was upon hearing The Seeds of War, and there’s definite potential for them in the future Dark Eyes instalments. So please deliver on that potential, Matt Fitton.

If there was anything to love about Dominion, it was Alex Macqueen’s turn as the Master — er, the Other Doctor. “Hello, you!” I love all incarnations of the Master (seriously, I defy you to tell me that Eric Roberts is not amazing), and Macqueen is a worthy addition to that pantheon. His ebullient positive attitude is so great, and he plays very well against this weary version of Paul McGann. I don’t know if he needs to be in this story, but his presence hints at bigger events, high stakes. If there’s any complaint to be had, it’s that we don’t get enough of him; give him another one of the mind-bogglingly big schemes and let him rip!

“Sally who?” you might say, but that’d be mean. Though Natalie Burt’s role in Dark Eyes: Fugitives was not a big one, I liked her well enough. She feels like one of those companions that could have been, and thus she’s a great “companion” to the Master.

If there’s any place where Dark Eyes 2 falls down, it’s in those individual four stories, which often suffer from the problem of many one-disc Big Finish releases, in feeling a little underdeveloped, and a little rushed in the conclusion. Matt Fitton’s Time’s Horizon and Eyes of the Master probably fare the best in this regard, though Liv’s actions at the climax of Time’s Horizon feel underemphasised. The Traitor ends weirdly, but that turns out to be a feature, not a bug, with a clever bit of structure running through the whole set.

As always, Paul McGann is great — this is a Doctor trying to let himself believe in hope again, but constantly running into a universe that won’t let him. He had recorded The Night of the Doctor by the time this was recorded (though I don’t think the writers knew a thing about it), and you can see how stories like this would eventually wear him down into the man we see decide to forsake being the Doctor altogether.

Wilfredo Acosta really goes to the max with the sound design here; Big Finish always does a good job in this regard, but as in Dark Eyes, this is really top-notch stuff, especially the bleak world of The Traitor. Life under the Daleks never sounded so gritty. It is unfortunate, though, that Big Finish no longer uses the David Darlington mix of the David Arnold theme (the version that debuted on Invaders from Mars), which would give the episode endings a bit more oomph. The original version (which they reverted back to with Absolution, I think) always comes in too suddenly and undramatically, undermining the cliffhangers.

Dark Eyes 2 is perhaps a more conventional story in some ways than its predecessor, but it’s still a solid four hours, packed with lots to enjoy, and the use of continuity ends up working like it does in those old Russell T Davies finales, to add a sense of scale and significance to the proceedings. As long as Big Finish keeps spotlighting the Eighth Doctor with this kind of material, I’ll be here, listening.

(Finally, someone at Big Finish has paid attention to my reviews and put a bonus music suite in one of these box sets. I don’t understand why they haven’t been doing this since day one. On the other hand, devoting a whole disk to Nick Briggs saying, “I rang up this actor I’d worked with before and they said ‘yes’ because they like getting paid for reading things aloud” 12 times over is just cruel, with the exception of the bit about Frank Skinner. I don’t know who he is or what he’s supposedly famous for, but the sheer fan-geekery he displays on the extras is hilarious.)