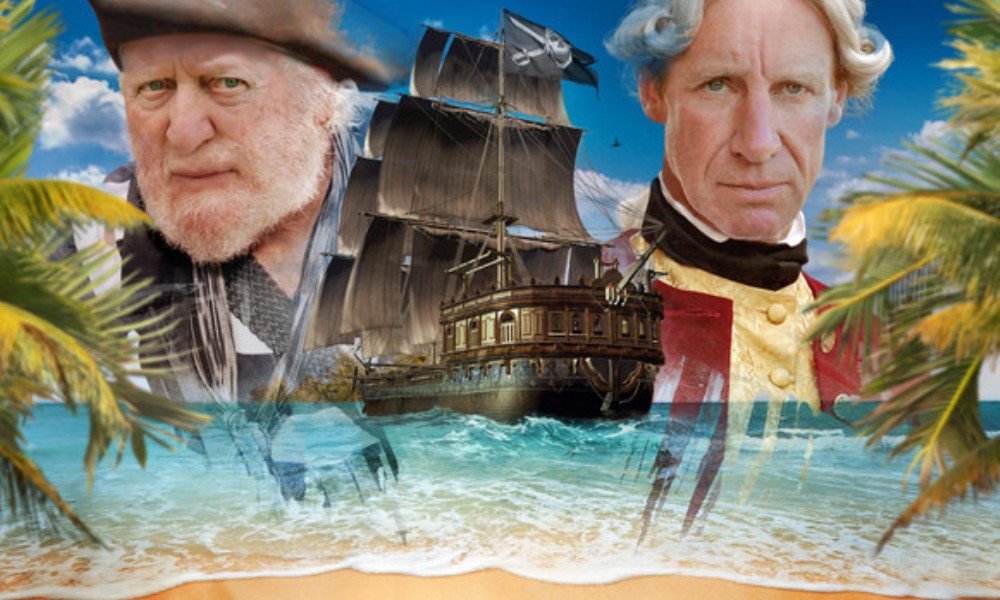 The quality of The Picture of Dorian Gray and a special $3 USD download offer was enough to tempt me into purchasing another “Big Finish Classic”, in this case their dramatisation of Robert Louis Stevenson’s Treasure Island, starring Tom Baker! Upon launching into the story, I realised that I have probably not read the original. If I have experienced the story to any degree, it is that I may have seen bits of Muppet Treasure Island in my childhood. Maybe. Much of Treasure Island has seeped into our cultural mythology, of course (here in the US, we have a fast food chain called Long John Silver’s), but this would be my first time truly experiencing the story. This means, then, that I did not experience Treasure Island as an adaptation per se, but as an original adventure.

The story begins with a man, Jim Hawkins, putting his son James to bed. James has been playing pirates — which prompts Jim to tell his son the story of how he actually encountered some pirates as a lad. Buoyed on by first-person narration, the story soon emerges of how Jim became entangled in a wild adventure that started with a strange guest at his mother’s public house and ended with fights to the death with cutthroats. The story is a little slow at first — it’s based on a Victorian novel, of course — but scriptwriter and director Barnaby Edwards uses that to build the suspense. The story is keen to point out that these aren’t your stereotypical “fun” pirates, but real dangerous sorts, and though I might quibble with this tale’s claim to realism, the pirates sure are dangerous, and these opening scenes lay the groundwork. The only time the pacing doesn’t work is a scene where things move quite quickly, actually: suddenly a character we’ve never seen before (Squire Trelawney) is hiring a ship to look for treasure and taking Jim with him. Wait, what?

I do have some moral reservations about this story, in the sense that I think that Squire Trelawney is an utterly morally delinquent character who doesn’t get what he deserves. And really, should all these “moral” people really be murdering other people over money that’s not theirs to begin with? Okay, okay, I’m ruining the fun.

Once things get to sea, though, this is a sharp little action-adventure story, with sudden reversal following sudden reversal, as Jim and his compatriots discover their very own ship of full of pirates. Though the story is over two hours long, it never flags, immaculately switching between fast and slow in order to ramp up the action. Only the ending comes across as a little flat: it may have worked on the page, but in performance, it lacks the level of size one feels a climax might have. No doubt much of the credit is due to Stevenson, but also to Edwards, in both his capacities. Howard Carter on sound design and music also does a great job with the action, as well as with the music; when his little main theme plays out, you can see the Hispaniola sailing. (Nicely, the third disc includes a suite of the music.)

Edwards has also assembled a first-rate cast. Tom Baker, of course, but I’d like to single Nicholas Farrell out first. Playing the older Jim, he has the somewhat thankless task of telling the story, not being in it, but with such a gorgeous voice, who cares. You might know him as Prime Minister Green in Torchwood: Children of Earth, but I’ve been a fan ever since I saw him play the best-ever Horatio in Kenneth Branagh’s Hamlet. Playing Jim’s younger self, Edward Holtom is surely the best child actor ever employed by Big Finish — why don’t they get this kid in more often? All the compliments I can think sound like damning with faint praise (he doesn’t sound like he’s reading aloud, he’s not smarmy, he understands how to act, he’s not an adult woman doing a funny voice), so I’ll just leave it at the fact that he’s excellent.

Okay, Tom Baker now. I don’t know what Long John Silver is like in the book, but Baker’s performance is wonderfully charismatic — of course. He’s clearly having tremendous fun, but that’s okay, because you should be too. A marvellous bit of casting (that no doubt made this project financially viable). And finally, I was pleased to hear Nicholas Pegg as Captain Smollett. As soon as the character opened his mouth, I pegged who he was — a fixture of Big Finish’s early days (back when they cast four actors as every character), he’s got a lovely tip-top accent, and he plays a great character here: the smartest, bravest, most honourable man in the room. They should tell more tales of this guy. Though if everyone has listened to him, the story probably wouldn’t have stretched to one disc.

I listen to a lot of Doctor Who (you may have noticed), but it’s good to branch out a bit every now and then. This, admittedly, is not that big of a branch, but it’s a fun one, and three dollars well spent, to be sure. Yo ho ho and a bottle of rum!