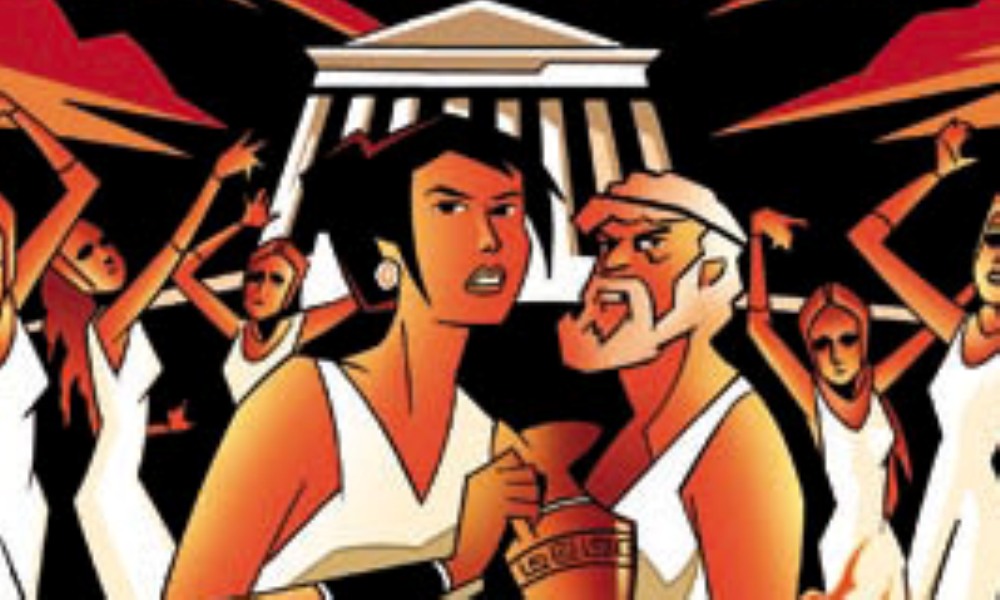 At the end of Summer of Love, Benny and Jason are sent on a mission — consult the Oracle of Delphi. You know, in Ancient Greece. Quite why wasn’t very clear to me, beyond a general sense of the dire political situation around the Braxiatel Collection. Quite how wasn’t clear, either — early on, Jason expresses surprise that whatever they did worked, but I’m pretty sure that later someone mentions the time rings, and these were destroyed in The Grel Escape (and A Life of Surprises, but who’s counting?).

Once you jump over that initial hurdle, The Oracle of Delphi proves to be an entertaining enough adventure, as Benny tries to figure out what happened to Jason, and how much she can tell Socrates about what lies in his future. It’s a pretty bog-standard moral dilemma for time travellers, enhanced by Paul Shelley’s charming performance as Socrates, a quick-witted older man, game for anything and everything. It’s his performance, and the relationship between him and Benny, that really makes Oracle of Delphi work. Unfortunately, Shelley doubles up, and his other character’s voice is so similar as to Socrates’s as to confuse. (This is actually explained away, and it’s an amusing explanation, but it came too late to help.)

Unfortunately, Scott Handcock’s script has its weak points, principal among them the treatment of Jason. If you read Bernice Summerfield: The Inside Story, a perception among many of the writers emerges that Jason is a bit of a worthless pansy. Now, I suspect this is good old fashioned gender bias — some people just can’t get over a man who has to consistently be saved by a woman. I bet if you reversed Benny and Jason’s genders, those people wouldn’t have a problem with Ben saving Jacyn’s life all the time. All that said, stories like The Oracle of Delphi don’t help — Jason is both led by his balls here and then mind-controlled. I thought the series was over this kind of thing? The past couple seasons have done a great job showing the strengths of Benny and Jason together, and this story is a poor reversion in that regard.

It’s a bit of a flimsy story on the whole. Better than The Tartarus Gate, but at least one felt that that story was trying to do something big even if not succeeding. The Oracle of Delphi feels like a throwback to an older style of Bernice Summerfield tale, the insubstantial romp that doesn’t have much new to say.

The Oracle of Delphi (by Scott Handcock; starring Lisa Bowerman) was released by Big Finish Productions in November 2006.