Doctor Who: The Light at the End review 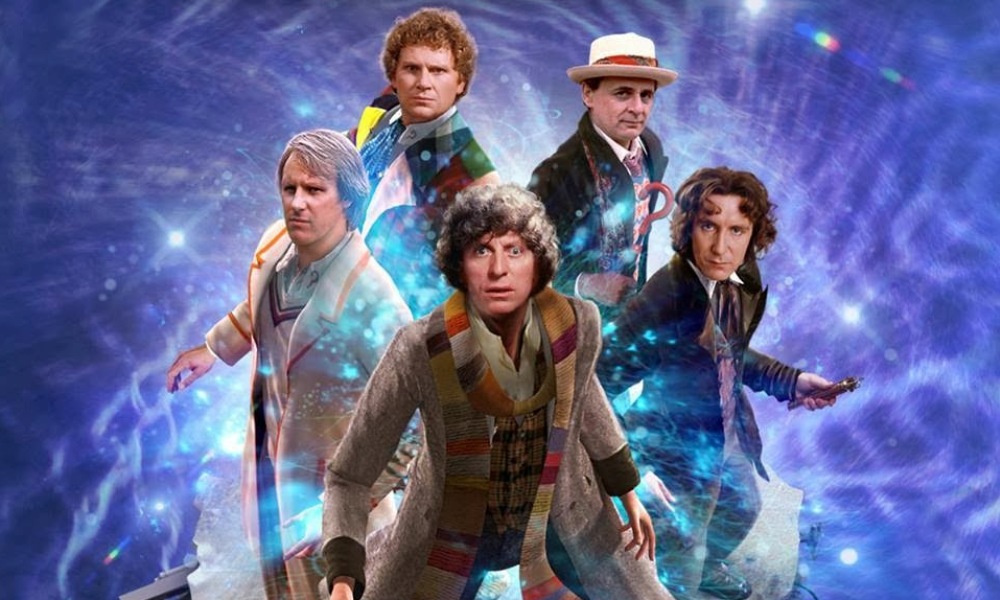 In his producer’s notes for Big Finish’s Doctor Who fiftieth anniversary special, The Light at the End (standard edition, as that’s all your humble reviewer can afford — also, he wasn’t really excited by the idea of photos of Colin Baker with bamboo photoshopped in), David Richardson observes that Big Finish considered not doing a multi-Doctor story initially: “There were concerns it was too obvious and expected; too much of a poisoned chalice in that it would raise huge expectations that would be hard to meet.” Upon reading that, I defensively observed (yes, I get defensive about CD liner notes) that if the multi-Doctor story was a poisoned chalice, then Big Finish had poisoned that chalice itself.

After all, the company has seemed to actively avoid giving its listeners a “proper” multi-Doctor story since it was founded. Project: Lazarus features a meeting between the Sixth and Seventh Doctors, but the Sixth turns out to be a clone. Zagreus is a four-hour meandering “romp” where all the Doctor and companion actors are brought back to play different characters than the ones we care about. The Four Doctors is a fine story, but the Doctors only interact for about 15 seconds. And then there’s The Sirens of Time, which gives three different Doctors their own 25-minute episode before uniting them for the fourth part. That’s actually pretty “proper”, but unfortunately you have to get past Maggie Stables talking about bodily fluids to get there. (Still beats Nicholas Courtney complaining about female companions’ dirty underwear in Zagreus, I suppose. Happy fortieth!)

But then I started thinking. Was the multi-Doctor chalice poisoned? Was there a good multi-Doctor story? What do fans want out of a multi-Doctor story? Well, I can’t actually answer that question for all fans, but I know what I want: 1) the chance to hear some “witty banter” between characters who don’t normally interact and 2) the chance to see actors as characters that I haven’t see for a while. I think #2 is important, and maybe more important than some people think. Sure, it’s fun to hear William Hartnell lay the smackdown on Patrick Troughton and Jon Pertwee in The Three Doctors, but it’s also fun to just see William Hartnell. This is why Richard Hurndall will never excite me in The Five Doctors, but I otherwise find that story good fun. This is why the trailer for The Day of the Doctor excites me immensely — not only do I get to see David Tennant interacting with Matt Smith, but David Tennant is back. Billie Piper is back!

So, under these conditions, what can a multi-Doctor story from Big Finish offer us? Nothing from category #2, actually. I can hear — and do hear — Peter Davison, Colin Baker, Sylvester McCoy, Paul McGann, and even Tom Baker month in and month out on Big Finish CDs. There’s no delight from a reappearance when someone’s never left. This is why the most exciting aspect of The Light at the End to me was the appearance of Charley Pollard. You all read about my sheer nostalgia for the character in my review of Enemy Aliens, and this story invoked that too. But all the others I hear all the time. Thus, The Five Doctors can get away with splitting up the characters for most of the story because it’s exciting just to see them. The Light at the End cannot, because it is not remotely interesting to hear the Sixth Doctor and Peri try to escape the Big Bang, or the Seventh Doctor and Ace run away from a slime monster. Which is all either pair does for most of the story, though they do spend about 15 second interacting before going different directions on an elevator. I briefly thought they might switch companions, which would be fun, but no such luck.

Thus, the real joy of The Light at the End is to be found in the interactions between the Fourth and Eighth Doctors, who spend most of the story working together, along with Leela and Charley. Tom Baker and Paul McGann are great individually, so of course they’re awesome together — the two of them double-teaming the Master is a delight. Why didn’t we get more of this between the other Doctors? Why were the middle three Doctors seemingly ghettoised together?

One thing I should single out: with more of a hook than “running from a threat that doesn’t require us to hire another actor”, the bits with the Fifth Doctor and Nyssa investigating what happened to Bob Dovie at 59A Barnesfield Crescent on November 23 1963 are pretty good and very chilling, especially with what happens to Bob’s family. But much of what the Doctors do in this story fills space in a very obvious way, like the Seventh Doctor and Raine’s plotline in UNIT: Dominion, taking up time without helping resolve the mystery — or even deepen it.

In a pseudo-surprise, the first three Doctors turn up, too. The first is voiced by William Russell, doubling up from Ian, and the second by Frazer Hines, also Jamie. The third is Tim Treloar, who’s appeared in other Big Finish stories including Return of the Rocket Men. They do decent jobs, though Treloar missed more often than he hit with his Pertwee imitation. Wisely, the earlier Doctors are kept out of direct action, their voices rendered ethereal. They worked as glimpses of other times, but I found that the more they were used, the less they worked. As good as the imitations Russell and Hines do are, they are still clearly just imitations.

Outside of the constraints of a multi-Doctor story, it’s a pretty average effort: no vast, complicated plot or deep insights into character here. The Master wants to kill the Doctor, and he’s got a plan to do it. Geoffrey Beevers is always good, but the material here is thin. And the guy who plays Straxus this time out makes me wonder why they didn’t get Nickolas Grace back again. There’s some painful exposition where the Doctors tell the companions facts about regeneration the audience already knows — why bother? The plot’s resolution suffers from a typical Nick Briggs predicament: backed into a corner by the sheer size of the threat, it’s undone in an utterly unsatisfying way, involving a lot of technobabble and some resetting, shades of Blue Forgotten Planet or The Vengeance of Morbius. On the other hand, the ending is pretty fun — a charming little tribute to all the years of our favourite series.

The unsung hero here is Jamie Robertson on sound design — like I said, the effect put on the older Doctor’s voices is suitably ethereal, and I got chills when Charley saw the whole history of the TARDIS. The best bit of sound design is a simple one, the rhythmic ringing of a mysterious light on the TARDIS console — its spookiness really underscores the scenes it’s in. I don’t know what I think of his new theme, though, an amped-up redo of the one used on the Mary Shelley stories, it sounds like Murray Gold (Series Four version) merged with John Debney while playing a rocket-powered guitar. And what’s the point of bringing back “Contact!” from The Three Doctors if you don’t bring back the sound effect? I did appreciate the opening scene’s call back to Fanfare for the Common Men, though.

I don’t know if multi-Doctor stories are poisoned chalices, but this one is certainly a little bit bitter. I wanted an epic story where the different Doctors interacted; what I got was a little bit of interaction with a thin runaround plot. Nothing bad, but nothing as special as the fiftieth might (unrealistically) demand. There’s a lot of fun to be had, but I feel like they’re could have been more. But perhaps, given that Big Finish can never give me my #2 requirement, I could never get the multi-Doctor story I wanted, especially at two hours. This is all why Time Crash is probably the best multi-Doctor story, as it gives us #1 and #2 and exactly nothing else.