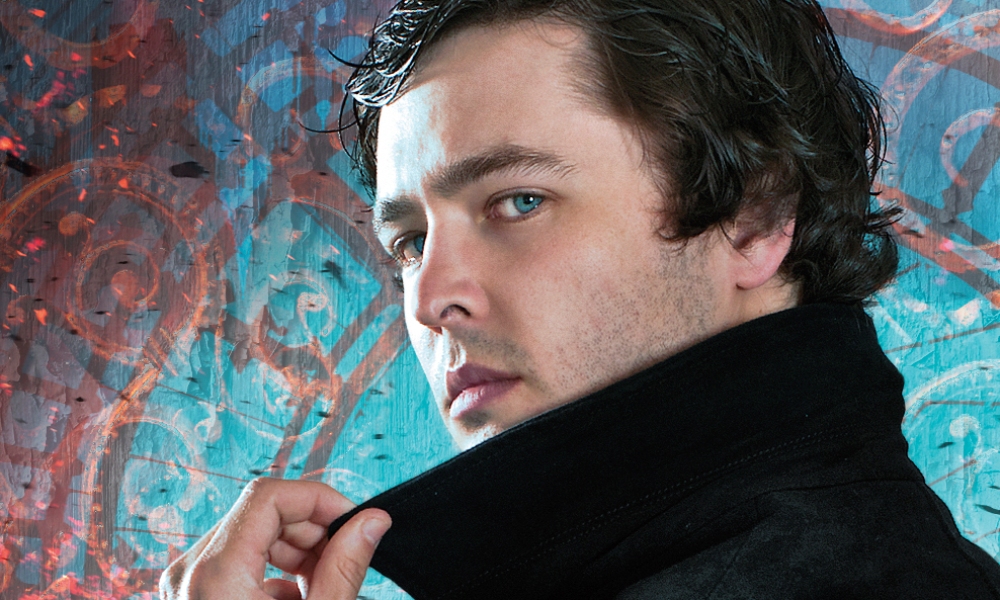 The Picture of Dorian Gray is the first “Big Finish Classic” I’ve heard — a series adapting classic (i.e. public domain) works of literature into full-cast audio dramas. (The other two so far, fact fans, are Phantom of the Opera and Treasure Island, though I was excited to learn that Frankenstein is forthcoming.) David Llewellyn adapts Oscar Wilde’s original novel into a two-hour story, with a disc of extras.

Obviously all adaptations are filled with fraught, difficult choices, and I don’t envy Llewellyn in his task — Dorian strikes me as a more difficult text to adapt than most — filled with long, talky scenes, plenty of reported action, and tonnes of inner monologue. That said, I think there are some missteps here. Obviously one of the advantages of doing an adaptation in 2013 is that some of what’s implicit about the original can be made explicit — it’s pretty clear that Basil Hallward is in love with Dorian, and it’s very clear that Dorian has a lot of sexual adventures. And that works, in and of itself. The story definitely had a homosexual subtext that was initially suppressed, and making it text is positive.

But, doing this elides other aspects of the story. You might argue that the original Picture of Dorian Gray is all about sex, but of course there’s very little actual sex in it. There’s lots of sex in Llewellyn’s adaptation, starting from when Lord Henry takes Dorian to a very special sort of “club”, and culminating in Dorian’s adventures abroad. But all this pushes out some of the other aspects of Dorian’s decadence. Perhaps because Wilde was forced to only hint at the sex, the novel becomes about so much more — it’s about Dorian taking on a lifestyle where the only positive moral value is ascribed to new sensations. Obviously the chapter where the narrator relates Dorian’s reading of Joris-Karl Huysmans’s À rebours would be difficult to translate to audio directly, but I don’t think that meant that Dorian’s escapades had to become sex, sex, sex. Where’s his obsession with the tragic nature of the Roman Catholic Church, his desire to create his own perfumes, his giving concerts of music never heard before, the time he “appeared at a costume ball as Anne de Joyeuse, Admiral of France, in a dress covered with five hundred and sixty pearls”? All of it’s gone, replaced with him sleeping with young men overseas. It flattens the novel into something less interesting than it was when the full extent of Dorian’s decadence stops being left to our imagination and seems to have been just a series of threesomes.

As much as I might disagree with these adaptation choices in the writing, there are others that clearly do work. I did quite like the choice to have Dorian narrate his own story in the first person. Dorian often has a detached, careless narration, but that suits the character perfectly, and it also makes sure we stay inside Dorian’s head sufficiently — a tricky effect in radio drama sometimes.

Alexander Vlahos is very good as Dorian, treading the line between sympathetic and self-involved without straying too far either direction. (He has previously played the role in Big Finish’s Bernice Summerfield and The Confessions of Dorian Gray series, so he’s had a lot of practice at it.) Marcus Hutton (the Duke of Buckingham in two Doctor Who audio dramas, The Church and the Crown and The Kingmaker) puts in a good performance as Basil Hallward. Despite his centrality to the novel’s plot, I feel like Basil is kind of put to the side by the novel, so giving him a good actor does a lot to keep the focus on his character in the novel’s later moments. I thought Hutton did a good job, giving small moments deserved emphasis.

The real star of this is Miles Richardson as Lord Henry. Anyone who’s heard him play Braxiatel in the Bernice Summerfield stories knows what a delightful voice he has, all silky and resonant, and it works perfectly for Lord Henry — Richardson succeeds in delivering all those epigrams as genuine dialogue. The slow decay of Lord Henry in Dorian’s (and the listener’s) eyes is definitely one of the real triumphs of the play.

Kudos also to James Dunlop’s excellent music. Quiet, nostalgic, and melancholy, it adds a distinct tone to the proceedings that definitely resonates, but I don’t think it’s the approach that would’ve occurred to me.

Despite the fact that you pay a two-CD price for The Picture of Dorian Gray, the release is actually three discs. Unlike in some cases (i.e. Love and War), this third disc actually provides a pretty good return on the time spent listening to it. David Llewellyn articulates the reasoning behind his adaptation choices, and while I might not agree with what he did to the Dorian/Sybil “romance”, I appreciate his explanation. There’s also a 30-minute music suite of James Dunlop’s work — I don’t know why Big Finish doesn’t provide this more often on releases where there’s so much room for “extras”.

The best part of the extras, though, is that there’s a complete episode (the first one, in fact) of The Confessions of Dorian Gray on the third disc, Llewellyn’s This World Our Hell, which sets up the series by sending an undead Dorian Gray to the bedside of a dying Oscar Wilde. At only 30 minutes, there’s not a ton going on here beyond that set up, but it’s a nice little horror story, and I really appreciate its inclusion.

Like all adaptations of classic literature, I think the Big Finish Classics version of The Picture of Dorian Gray stepped into a minefield. I’m trying to reflect on what I’d like that wouldn’t just be a straight adaptation of the novel — and that’d be impossible! I think it’s possible you could do better than this in a theoretical sense, but in a practical sense I doubt it. There have been a lot of more misjudged adaptations of this novel! Adaptation demands a new stamp be put on a work, of course, but David Lllewellyn’s stamp is perhaps a little too different from Oscar Wilde’s for me to be able to truly appreciate it.

This World Our Hell and The Picture of Dorian Gray (by David Llewellyn; starring Alexander Vlahos) were released by Big Finish Productions in October 2012 and August 2013 respectively.