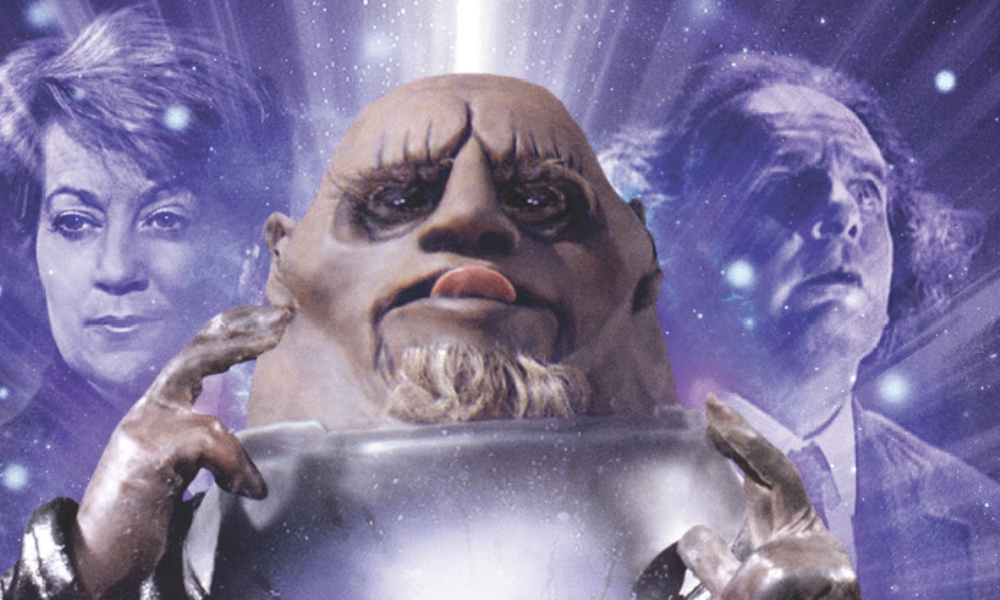 Klein’s adventures with the Doctor continue in Starlight Robbery. But forget about her — I’m here for Garundel, the loveable frog merchant (that’s a merchant who is a frog, not a merchant who sells frogs) who first appeared in author Matt Fitton’s Black and White. Stuart Mulligan utterly won me over with his performance in that story, and I was eagerly anticipating his reappearance. (My wife and I never laughed so hard at a BF audio as at “I’m Ace.” “Of course you are, sweetheart. And I’m fabulous.”)

For some reason, though, Garundel didn’t quite work for me as much in this story. Part of this is because Fitton, wisely, switches things up. In Black and White, Garundel is put upon and long-suffering, and a lot of the comedy comes from his indignation at the way literally everyone treats him completely dismissively. And he’s basically the sole comedic element in a largely serious story. In Starlight Robbery, he’s running an auction for the Persuasion Machine created by Kurt Schalk, and so he’s adopting a different persona of auctioneer and huckster, and I didn’t find it quite as entertaining, especially given that everyone at the auction is a “goofy” space alien. Even though Milligan is still doing his thing. However, things take a turn for the dire at the end of Part Two, and Garundel suddenly becomes conniving and dangerous, and he suddenly became much more interesting.

Indeed, the whole story became much more interesting at that point. Like Persuasion, it feels like our story has been stretched out a little bit too much. I can’t help but compare it to the Key to Time sequence on screen. There, the Key was small component in each story; there was a lot more going on and a lot more problems to solve than the finding the next segment of the Key in The Ribos Operation or The Androids of Tara. But all there is to Persuasion and Starlight Robbery is finding the Persuasion Machine, and this effort is being stretched out over eight episodes at least — probably 12 including next month’s Daleks Among Us. Not enough is being added aside from the search to sustain interest; the characters spend all of Part One just getting to the auction! At least there are a lot of funny lines along the way. (Though, “Kessel Run”? Really? Am I supposed to be stupid?)

In Part Three, the story becomes a chase, and then it livens up. There’s a lot of characters here to keep things interesting: Garundel, the Doctor, Klein and Arrowsmith (trying to pretend to be alien warlords), Garudenl’s assistant Miss Ziv, and, of course, the Sontarans. The collision of goals and methods makes for a frantic, shifting, entertaining second half, as the characters attempt to outwit each other to obtain the Persuasion Machine.

Dan Starkey steals the show here, literally playing every Sontaran. He does good stuff on TV with Strax, of course, but who’d’ve thought he could do this? They’re recognisably different characters, which is extraordinary given that there seems to be a dozen of them. They’re also written well — I like my Sontarans a little comically pompous, but still intelligent and deadly, and Fitton delivers. Probably only Toby Longworth could dream of doing better. I also particularly enjoyed Jo Woodcock’s Miss Ziv, who makes her role quite likeable. Will Arrowsmith was a bit better this time out, even, rising to the occasion a number of times. I do question what Klein is doing here still, though.

Starlight Robbery is a story it’s hard to muster a lot of enthusiasm for. Though it has a number of good elements (Garundel, Sontarans, Klein) and though it’s fun in places, it’s not fun enough, it’s not interesting enough. There’s something bigger and more complicated going on with Klein, but I’m not sure that I care. Of course it’s better than the dull Persuasion, but there’s no hook, there’s just an indication that we have to tune in to Daleks Among Us for the dullest of reasons.

(Also, even if you like the interview extras, give these ones a miss. Over half of the quotes you’ve already heard on Persuasion!)