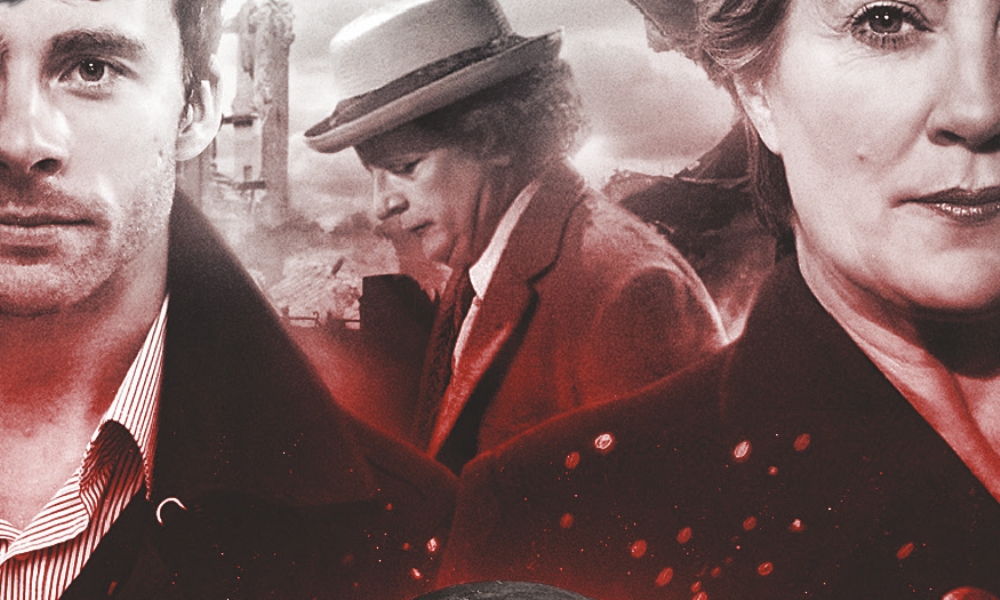 Klein is back! Hot off the success of UNIT: Dominion, everyone’s favourite not-a-Nazi is puttering along at UNIT with her new assistant, Will Arrowsmith, when up pops the Doctor, tiring and nearing the end of his seventh life. Persuasion begins the third of 2013’s audio drama trilogies, featuring the Doctor, Klein, and Will on the trail of a mysterious piece of Nazi technology.

The cover promises a gritty, grim adventure. Unfortunately, we don’t really get this, and what we get instead feels unfocussed. I wanted to like Persuasion, but in the end, it feels a bit of a mess. The story is written by Jonathan Barnes, who like Steven Hall, apparently became a critically acclaimed author solely as a route into writing Doctor Who audio dramas. (In the Doctor Who range, Barnes made his Big Finish debut with one of the weaker segments of 1001 Nights.)

The episodes of Persuasion are shorter than normal, barely making 25 minutes in most cases, and that includes teasers attached to the starts of the first three parts. Within each episode, it feels like very little actually happens — it takes all of the first part to get to where the story is happening, all of the second part to learn what’s going on there. Everyone talks about stuff that is happening, but little is happening. Things are dragged out by characters not wanting to help, and then deciding to help a little bit later.

There are some interesting ideas here, but they don’t quite come off. The villains of Persuasion are from another universe (who isn’t?) but this is related by having them speak in iambic pentameter with some modulation on their voices. Which isn’t bad, but it’s also not enough on its own to impress as aliens so unfathomable that memories of them can’t be held in the human mind. It also doesn’t help that the aliens need 1940s humans to build them a device to be really effective. The plot as a whole just doesn’t engage interest. The idea of setting a story in Düsseldorf after the Allied invasion, and on Minos where an old Nazi is hiding, is appealing, but neither is really capitalised upon, with very little atmosphere communicated to the listener, and what atmosphere there is is undermined by all the goofy aspects of the story. (Also: this is the third release this year with Evil Corporate Aliens, after The Wrong Doctors and Spaceport Fear.)

Klein herself… I loved the character in Colditz and in her first trilogy… and she was wonderfully acerbic in Dominion… but I’m not sure she’s up to much here. What’s the point of Klein if she’s not actually a Nazi? She’s still someone willing to be harsh to get the job done — but she’s actually not here in Persuasion, as she’s constantly questioning the Doctor on his harsh methods. Where did this come from? It seems to be born of a personal dislike of her “umbrella method” (and who can blame her), but Klein’s way too good of a character to follow the Doctor around asking him what’s going on and acting aghast at how he handles it. We could’ve just had Raine back again if that was all we were gonna get! Tracey Childs can’t ever be faulted, though.

New companion Will Arrowsmith, played by Christian Edwards, on the other hand… I see what Big Finish was going for with this nerdy, awkward character, but not quite why. Christian Edwards pitches his performance a little off. I think if Will’s dialogue was read in Edwards’s normal delivery, the character would work, but as an over-the-top caricature of a dweeb with a high-pitched voice, it’s all a little too on-the-nose. I’ll admit there were parts I liked (his deconstruction of “sonic dictaphone”), but on the whole he leaves me uninterested so far. I don’t hate him, but why should I like him? Persuasion gave me no reason. We’ll see if Matt Fitton can do more with him in Starlight Robbery — Fitton can do well with comedy.

Guest star highlights are David Sibley and Jonathan Forbes as two Nazi scientists with some doubts about what they did. Interesting, complicated characters with performances to match — why couldn’t one of these guys been the new companion?

I did really like Barnes’s take on the weary Seventh Doctor. Dominion already seemed to take place close to the end of his incarnation, and Persuasion seems to take place even later, and the Doctor’s become withdrawn and mission-driven, maybe even more so than in his Gods-fighting days — but he’s also quieter and more at peace, somehow. The coming end of his life is used to good effect (and if any Doctor knew his life was about to end, it’d be this one).

Overall, it’s a disappointing start to the newest trilogy, made all the more disappointing by the story’s partial non-ending. Stretch a good story out, sure, but when something falls flat (and Persuasion surely does, even if it’s never actively bad), a cliffhanger is the worst possible thing to come along!