Doctor Who: Trouble in Paradise review 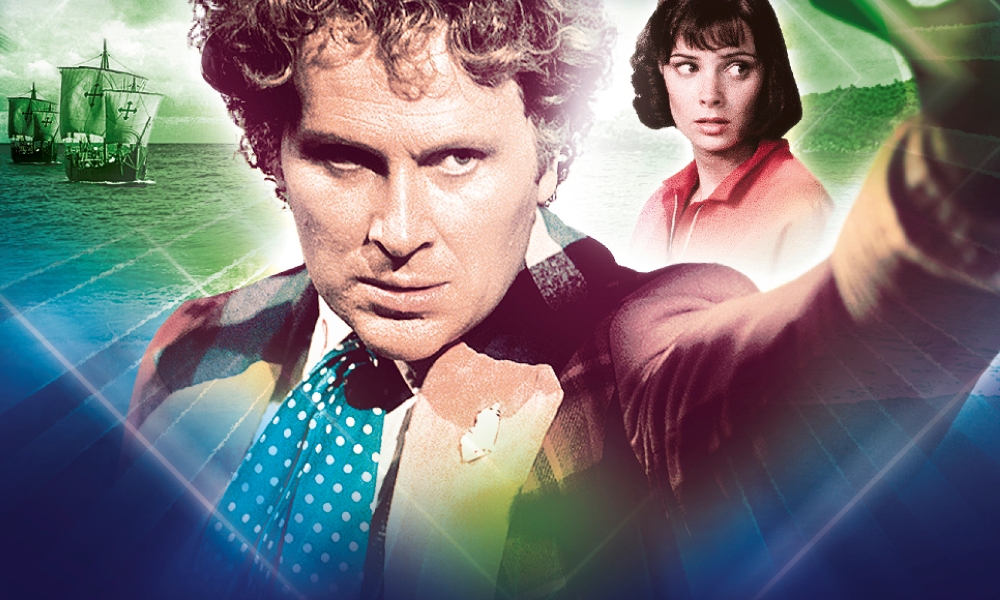 Nev Fountain is back! Trouble in Paradise doesn’t so much celebrate the Sixth Doctor as seen on screen (thankfully), but the Nev Fountain variety of Doctor Who, seen far too sporadically over the years in Omega, The Kingmaker, and Peri and the Piscon Paradox. A comically exaggerated world of blustering fools, one of which is the Doctor himself, it’s always worth a visit.

Trouble in Paradise opens with a much more direct impact of the Eleventh Doctor on the narrative than we’ve seen in most Destiny of the Doctor releases; he’s right there at the beginning of the story, sending the Sixth Doctor on a mission. I like how these stories have kept the future Doctor’s means of intervention as well as the requirements he sets forth varied, preventing the device from becoming stale. (One does wonder how or if the finale The Time Machine will fit all this in!) In this case, the Sixth Doctor and Peri must recover a powerful energy source generated via temporal paradox in order to provide it to the future Doctor, who will otherwise not be able to save the universe. Also the Eleventh Doctor expresses his utterly sincere appreciation for the Sixth Doctor’s coat!

This energy source is to be found on the Santa Maria as it arrives in the new world under the command of Christopher Columbus. Columbus is written by Fountain and played by Cameron Stewart as a blustering, pompous, egotistical, cruel man with a limited perspective, and the effect is completely fun, especially in the extracts from Columbus’s diary read by Stewart. My only regret in this regard is that Colin Baker wasn’t in this story — he and Stewart would have played off each other beautifully. Instead we have Nicola Bryant’s imitation, which is good, but will never be quite as… big as the genuine article. On the whole, I enjoyed Bryant’s reading — she performs it in her natural accent, only dropping into an American accent for the dialogue and thoughts of the actual character of Peri, and she’s a very pleasing reader.

The story has got some good twists and some clever ideas. I liked the way the future Doctor’s plight was used to generate suspense within the story, meaning it wasn’t just an outside framing device, and the motivation and background of the villain are clever if farcical. (But then, that’s Doctor Who for you.) There are also a number of fun jokes, many of them related to a goat, and even a forward reference to Silence in the Library/Forest of the Dead that I would never have expected. Fountain also gets this Doctor and his companion — the Doctor is well-meaning but sometimes neglectful of the human perspective, while Peri is principled and compassionate while prone to reacting rashly. The two, as always in Big Finish, get along with some friendly bickering, which one suspects was Eric Saward’s intention all along but beyond his capability to write. There’s a lot of great scenes and dialogue here: each ribs the other’s means of speaking, Peri calls the Doctor a cat, the Doctor pretends he’d rather have the goat as his companion. It actually even matters that Peri is an American!

It’s a goofy story in the end, but a goofy story with a point — and what great goofiness anyway. I can’t imagine actually seeing this story on screen during Season 22 or 23, but man, I would sacrifice The Mark of the Rani, Timelash, or Revelation of the Daleks for this in a heartbeat. (Hm, if that’s not damning with faint praise, I don’t know what is.)

Trouble in Paradise (by Nev Fountain; read by Nicola Bryant) was released by AudioGO in June 2013.