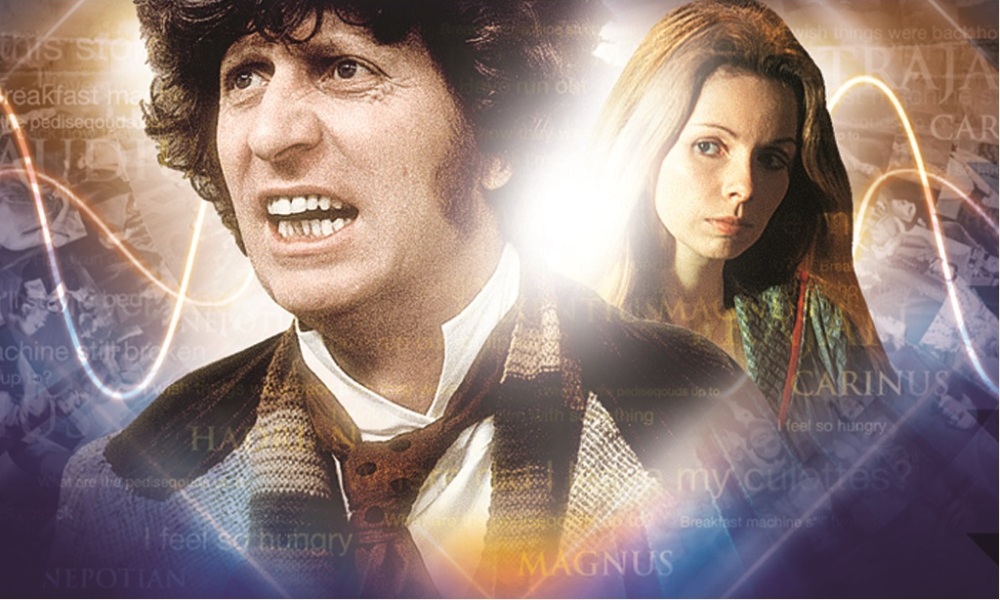 With Babblesphere, the Destiny of the Doctor audio dramas cross over into territory that Big Finish regularly gives us in full-cast audio dramas — recreating the Fourth Doctor era is something that happens once a month these days. Thankfully, then, Big Finish has opted to switch things up a bit by giving us a Doctor/companion team it seems we are unlikely to get in full-cast mode any time soon, with Lalla Ward reprising her role as Romana.

Despite its Christopher Hamilton Bidmead-esque title, Babblesphere feels like a perfect little package of the late 1970s from the moment it begins: with narration describing a colony overlooking a volcanic wasteland, backed by Steve Foxon’s pompous music. One can exactly imagine the model shot this would have been accomplished with, the slow camera pan, and Foxon’s music is so Dudley Simpson-esque, it positively hurts. But in a good way. We then go inside the eponymous Babblesphere, and a lone man dies mysteriously just before the TARDIS materialises. Doctor Who by the numbers to be sure, but with Jonathan Morris writing and Lalla Ward reading, what divine mathematics! Morris has been nailing this time period since he wrote Festival of Death way back when, and Ward is not just the noblest Romana of them all and a fantastic companion, but a great reader.

Nicely, Babblesphere keeps things fresh by telling a modern story in this 1970s style; basically it’s one long joke at the expense of Twitter (though it has its serious moments, too). I’m no lover of Season 17, but this slides fairly well into the general era that gave us not only Nightmare of Eden (even more polemic than this!), but also The Sun Makers and even The Leisure Hive. Perhaps more like The Hitchhiker’s Guide to the Galaxy than Douglas Adams’s Doctor Who actually ever was, but who cares when the result’s this fun?

Because fun it is. Like many of the best Companion Chronicles, the biggest regret I can express is that the Doctor isn’t there to act this off against his companion. I just watched half of Meglos today, actually, and what a joy it would have been to hear Tom Baker say these lines back to Lalla; the bit where they bicker about whose sonic screwdriver will be used to stage their escape is great.

But the fun doesn’t stop there — there’s a delightful and unusual group of rebels here, and Ward does a great job of reading their lines, too. The climax is about as predictable as they come, unfortunately, but at least it’s fun, especially with the arrival of a future Doctor to lighten things even more with an utterly in-character joke. And though the ending joke was nice, surely I’m not the only person to even grin at the mention of Zagreus! (How on Earth did the fortieth anniversary get to be so long ago already?)

I think I keep on saying it, but this is the best Destiny of the Doctor yet. It’s like watching Season 17, only better — and isn’t that what the best tie-in fiction should always be like?

Babblesphere (by Jonathan Morris; read by Lalla Ward) was released by AudioGO in April 2013.