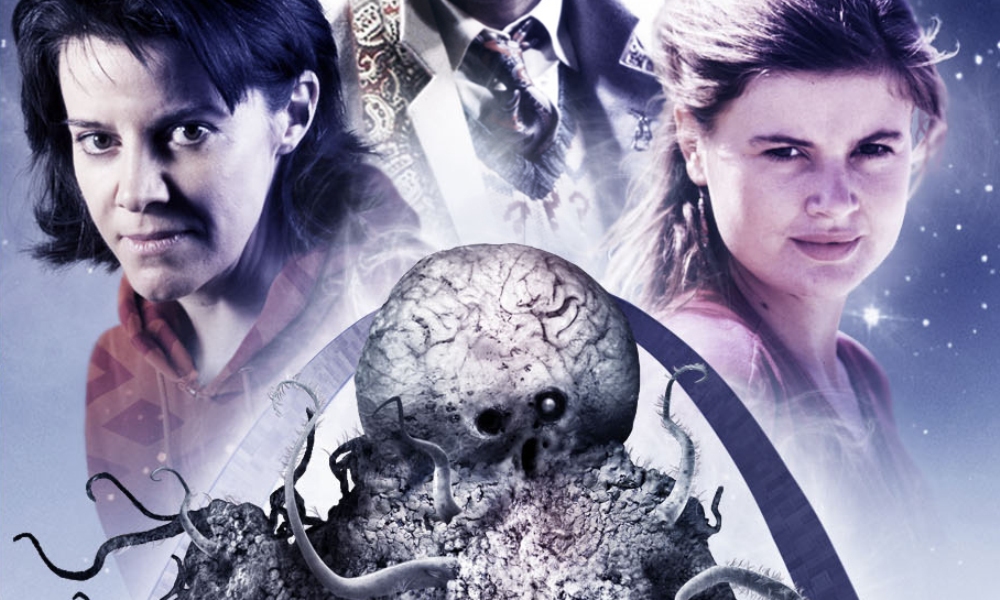 Love and War is (for me) the last of 2012’s “special releases” from Big Finish’s Doctor Who line. It’s an adaptation of Paul Cornell’s novel of the same title, the very first novel to feature Professor Bernice Summerfield. It’s a celebration of Benny’s twentieth anniversary, as Love and War came out back in 1992, but it’s also a celebration of Big Finish itself — the company’s first-ever audio production was Oh No It Isn’t!, also a Jacqueline Rayner adaptation of a Benny-featuring Cornell original New Adventure.

Oh No It Isn’t! and the other audios of Professor Bernice Summerfield’s first season were actually my introduction to the good professor, but unlike in those cases, in this one I’ve read the novel already. That said, it was so long ago that I only remembered the broadest of plot outlines going in — Benny arrives, Ace leaves, and there are fungus monsters on a planet called Heaven. So I went into Love and War ready for the origin story that Benny’s never gotten in the audio medium, the medium that’s ended up dominating her existence this past decade.

Last month, my wife and I completed a watch-through of all of the televised stories featuring the Seventh Doctor and Ace, from Dragonfire to Survival. What struck me in Love and War was the extent to which this story seems to follow straight on from Survival, much more so than Big Finish’s lacklustre “Season 27” of a couple years ago. It’s a little too fast and jumpy, like The Curse of Fenric or Ghost Light, and Ace is young, loud, opinionated, inexperienced, and quite loveable. This story really completes the series of Ace-growing-up stories we got in Ghost Light, The Curse of Fenric, and Survival, giving Ace her first real romance — and thus her first real chance of loss. Though I’m sure that the novel handled all of this material well (Paul Cornell could hardly do otherwise), the chance to get Sophie Aldred perform this stage of her character’s development is invaluable. It feels like 1989 was only just the other day.

Sylvester McCoy, too, feels like he just wandered out of Season 26, with the Doctor enacting a complicated but vaguely explained masterplan, one that in this case actually requires him to forget parts of it if it’s going to succeed! His Doctor is instantly recognisable, flitting in and out of scenes and being portentous, but also humorous when the situation calls for it. This is the different Doctor of the 1980s, and it shows. Lisa Bowerman, of course, excels in her “debut” story, recognisably Bernice Summerfield, but a little softer than the battleworn persona her years of suffering at the hands of Big Finish have created. I was surprised at how quickly Benny opened up to the Doctor and Ace about her personal history, but we’ve come upon her at a point in her life where she seems much more comfortable than in her fraught Braxiatel Collection days. If only she knew! She doesn’t feature strongly in the plot, but it’s a key role, and you can see how she could go on for years of adventures with the Doctor after this point (which, of course, she did).

Love and War isn’t without its problems, though. Including the Doctor Who Magazine prelude to the story in narrated prose form is a lovely idea, but it obviously wasn’t written for performance, and it’s a little hard to grab hold of what’s going on in the audio medium. Indeed, there are a couple weaknesses of adaptation here: the pre-credits sting is a very banal snarling bad guy, and the way the cliffhanger at the end of Part One is performed, directed, and sound-edited makes you wonder if anyone involved knew it was supposed to be a cliffhanger, so perfunctory does it come across. Perhaps the biggest weakness of the transition is the love story between Ace and Jan, which moves astoundingly quick to them being in love. But the scenes between them are well written enough — they feel just like an awkward, impassioned first romance ought to — that once you get over that initial hurdle, you buy into the relationship completely.

On the other hand, there are also some moments that work better on audio than I suspect they did in prose, such as the quick cuts to Ace’s youthful adventures with her Perivale mate Julian, which come in at a couple key moments, and really build off what we learned about Ace in Survival and other television stories.

There’s a large cast of characters here; I particularly enjoyed the performances of Riona O Connor as Máire Mab Finn and Aysha Kala as Roisa McIlnery, two of the Travelers’ in Jan’s camp. They share some strong scenes that are very well-performed. Intense stuff. I also really appreciated that Charlie Hayes puts in a brief cameo as the embodiment of Death that the Travellers encounter in ’puterspace, reprising a role she originated for Big Finish way back in 2003’s Master — what an unexpectedly nice touch! The weak links are probably Ela Gaworzewska as Christopher, who does a fine job on her own merits, but sounds more like a woman doing a deep voice than an androgynous person, and Bernard Holley as the villain, who we just occasionally cut to saying something malevolent, which is perhaps one of my least favourite audio devices, so it’s not really his fault per se. What is nice about this is that we have a large cast of characters (probably more than most Big Finish productions can support), but they’re also all treated like characters, with big backstories and their own desires, not just plot functions. It makes Love and War stand out from other Doctor Who audios, which often take a very utilitarian approach to characterisation.

Love and War is a big story, though it perhaps claims to be bigger than it actually is, with the Doctor building up the threat of the Hoothi in a way that doesn’t seem commensurate with what they actually do. Ace declares that the Doctor seems out of his depth at a point where he hasn’t really done anything other than look for a library book; he ends up in a bad spot, sure, but he isn’t there at this point, and the lines seem to be attempting to generate a suspense that’s not quite there. But in Part Two, when things really do get going, we get a large, tragic story for the Doctor and Ace that works astoundingly well, and ties up Ace’s development perfectly.

Gary Russell’s direction and Steve Foxon’s sound design let the side down on a couple occasions — Ace and Jan’s journey into space doesn’t get the buildup or drama that the moment deserves, and there are a couple key conversational moments that feel surprisingly underdone. But these are a couple moments that stick out because of their presence in an otherwise well-done play.

I don’t know if I’d want a series of adaptations of the New Adventures as some have called for in the wake of Love and War’s success, but the story does more than make up for the miserable showing that Andrew Cartmel’s helming gave us in the Seventh Doctor Lost Stories. Love and War is Doctor Who as it truly was in the late 1980s — young, brash, emotionally true, ambitious, a bit naïve, and thoroughly enjoyable.

(Mind-bogglingly, this story has a whole disc of CD Extras, which turns out about as interesting as you’d expect. Actually, there are some good bits, especially from Paul Cornell, talking about the genesis, role, and impact of the original novel. But on the other hand, we have David Richardson asking Lisa Bowerman about the continuity of this story vs Big Finish’s Ace/Hex audios. Which, unsurprisingly, she does not know or care about.)