Doctor Who: The Wrong Doctors review 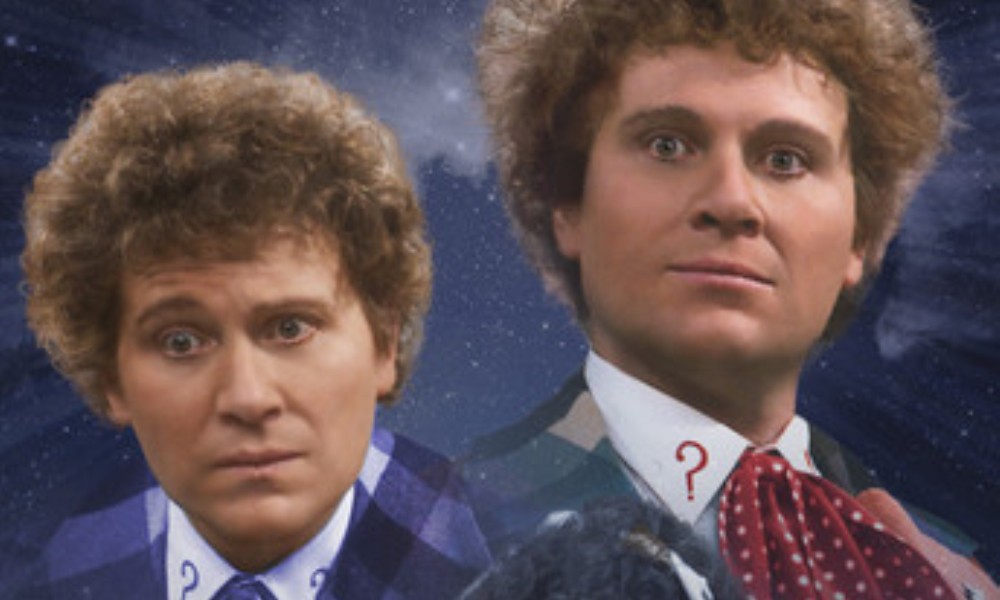 The Doctor has just been put on trial for his life by his future self, and survived by the merest of chances. The Doctor has just been left by Dr Evelyn Smythe, one of the best companions he ever knew. Melanie Bush is a young college-age woman living in Pease Pottage with her parents and working at the local radar installation. Melanie Bush has been travelling with the Doctor for years when she is plucked out of time by the Time Lords.

Two Doctors and two Melanies end up in 1980s Pease Pottage, but none of them quite fit with one another. The Wrong Doctors kicks off the fiftieth anniversary year in the Big Finish range by providing us with a multi-Doctor story… only all of the Doctors are Colin Baker. Matt Fitton’s script is a twisty one, and a fun one. The only thing better than one Colin Baker is, of course, two Colin Bakers, and Fitton and Baker pull everything they can out of this. But the zaniness doesn’t stop there, as evidenced by an early scene where a motorist runs afoul of a dinosaur.

Fitton’s story is good fun, and thankfully, he doesn’t rest on the two Doctors conceit — there’s a lot of stuff going on here, sometimes too much. There’s time ruptures, character work for Melanie, songs, evil alien entrepreneurs, and more. The plot unspools in a complicated, almost Steven Moffat-esque fashion, and though I found myself slightly confused as to whose plan was what by the end, I enjoyed the ride the whole time.

It’s been over five years since Bonnie Langford last made an appearance as Mel in the audios, and I’d never thought I’d say this, but we’re long overdue. Stripped of her obnoxious screaming, dimness, and the worst dialogue this side of a megabyte modem, Mel has emerged as the gung-ho, enthusiastic kind of companion the 1980s always seemed afraid to give us on screen, and she’s usually a delight to listen to. The Wrong Doctors is no exception: Mel is smart and brave here, and the story even makes good use of her oft-forgotten backstory elements. Langford even steps up to the challenge of playing two Mels, and both of them have good rapports with both Doctors. Colin Baker too excels as his double self, though I didn’t find the contrast between the post-Trial and the post-Evelyn Doctors as sharp as the script seemed to want me to.

There a number of strong guest characters, too: Tony Gardner is great as Mr. Petherbridge, starting as a slight self-important member of the Pease Pottage community, but slowly becoming something more. I also really enjoyed Beth Chalmers’s character of Vaneesh, a satire of trendy businesspeople who uses the delightfully awful word “probjective”. Any of the guest characters in this story easily could have been stock, but the writing and performances stop that. Indeed, there are a few lovely moments between the guest characters that I did not expect, while they think of the circumstances that brought them to Pease Pottage — and when one of them finally gets to go home in the end.

The Wrong Doctors also receives a big assist from the music of Simon Robinson. I don’t remember ever taking note of his work before, but The Wrong Doctors has one of the best scores I can remember in a while, alternating between action bits, funny bits, and genuinely moving bits with some twangy guitar. There’s almost 20 minutes of isolated music on Disc One, and I’m already sure that it’s one that’ll get a lot of play on my iPod.

I remember ruing in my review of The Curse of Davros that Mel was long overdue for an appearance, and that was over a year ago, so I’m glad to finally hear her again. Thankfully, it’s in a fun story that shows what the character’s made of: steel, despite that bubbly exterior. This is Melanie Bush — both of her — at her very best, and I look forward to the rest of this trilogy.