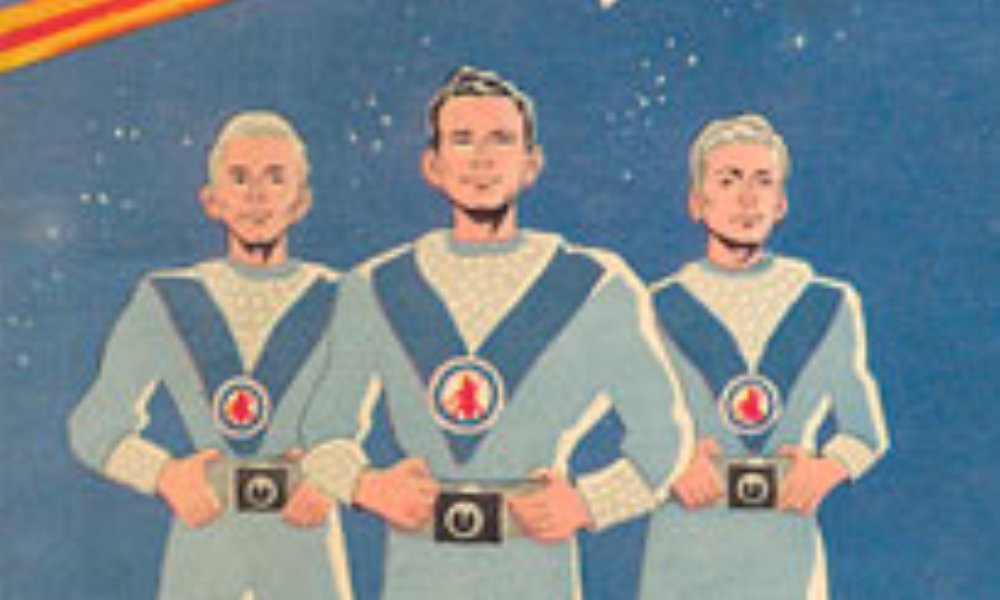 Once there was a science-fiction multimedia phenomenon – TV, audio adventures (a radio show), comics, books, toys, and more. It was almost certainly an influence on the original Star Trek and it was partly inspired by a novel by one of the biggest names in science-fiction.

You’ve probably never heard of it.

Tom Corbett, Space Cadet began as a television series in 1950, developed by Joseph Greene over a period of a few years and owing a debt to Robert A. Heinlein’s 1948 novel Space Cadet. The series centred on the adventures of three Space Cadets training to join the Solar Guard: natural born leader Tom Corbett, sarcastic but intelligent Roger Manning, and enthusiastic, emotional engineer Astro, crew of the Solar Guard cadet ship Polaris. Other regular characters included the Space Academy’s Captain Steve Strong, Doctor Joan Dale, and Commander Arkwright. The TV show was produced live on a series of television networks, often managing surprising effects given the constraints the show operated under, but more often demonstrating the weaknesses of early television. The acting was inconsistent, the sets limited, and the show generally couldn’t live up to its ambitions. It was just too early in the development of TV as a medium to successfully pull off space opera adventures.

Fortunately, the show’s tie-ins didn’t suffer from those limitations, though each had limitations of its own. The comic books were, like many of the TV episodes, solidly aimed at young children. The newspaper comic strip was a definite improvement, combining the 1950s adventure comic strip style with science-fiction. The radio series from 1952 benefited from listener imagination providing the necessary visuals. Arguably the strongest form of the series, though, was the tie-in novel line.

In the 1950s Grosset & Dunlap had been one of the dominant publishers of books for younger readers for decades, having introduced such popular characters as the Hardy Boys, Nancy Drew, and Tom Swift. They licenced Tom Corbett for a series of eight novels by Carey Rockwell (apparently a pseudonym) published from 1952 through 1956. The books drew on elements from the other formats of the show but occasionally went in their own direction. In the 1950s, no-one worried about canon.

The books are undeniably dated by modern standards, with the cadets all being white male American boys who don’t cuss and look forward to exciting lives of adventure and heroism. Roger is somewhat cynical compared to the other characters, but in general the tone of the books and the characters is consistently earnest. And as science-fiction goes, this is old pulp stuff, with Venus and Mars being hostile but hospitable and no sign of the computer and communications revolutions to come. But it’s fun space adventure with some of the same kinds of storylines (albeit simpler) about living away at school that you’d find in the Harry Potter books. The main characters face Academy rivalries, play sports, get into trouble, and bond as a team.

There are some foreshadowings of Star Trek. The Solar Guard and Space Academy are clear precursors to Starfleet and Starfleet Academy. The Solar Guard’s nonlethal paralo-ray guns are similar to phasers on stun. Even more telling is a scene from the first novel, Stand By for Mars, in which Strong and Dale discuss the importance of blending the Polaris unit’s combination of “brains, experience, and knowledge” – the very different personalities of Roger, Astro, and Tom – in a way that will remind any Star Trek fan of the Spock/McCoy/Kirk dynamic.

Fans of Robert A. Heinlein’s juvenile SF novels of the 1950s will also find a lot to enjoy here, though these books are simpler and have fewer ethical dilemmas. There are a lot of similarities especially between Heinlein’s Space Cadet and Stand By for Mars, with a number of character and plot elements being echoed. In Yvonne Fern’s book Gene Roddenberry: The Final Conversation, Roddenberry cites Heinlein’s Space Cadet as a key influence on the creation of Star Trek. Others have seen Corbett as an influence, suggesting that a combination of Tom Corbett and the classic movie Forbidden Planet would look a lot like the original Star Trek.

But you don’t have to focus on its place in history or its influences or the influence Tom Corbett, Space Cadet had on other series. It’s good clean fun in its own right. It’s also apparently in the public domain now, so it’s easy to find the novels online (for example, at Project Gutenberg) as well as the comic strips, comics, radio episodes, and a few TV episodes (try YouTube or the Internet Archive). If you want to know more, spend some time at the longest running Tom Corbett website, www.solarguard.com/tchome.htm.

Oh, and at all costs avoid the recent Bluewater Comics revival of Tom Corbett, Space Cadet. They’ve used the name for what little brand recognition it still has; the stories and characters are otherwise unrecognisable, without being enjoyable in their own right.

Steve Roby is a librarian and longtime collector of science fiction media tie-ins (and too many other types of books) who's currently pondering how best to update and overhaul the Complete Starfleet Library website.