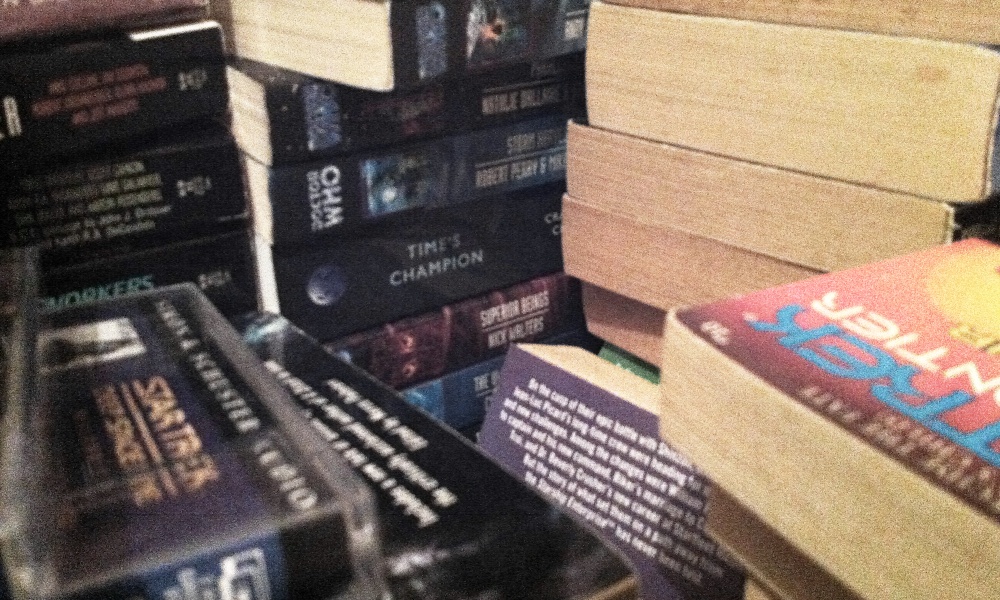 Tie-in fiction is a huge industry and could be argued to encompass anything from comics to novels to audio and is produced by individuals, groups and organisations. It has been around for a long time; we might choose to assume that it began with Star Trek novels in the late 1970s but if we look wider there are plenty of other examples, the most obvious of which is the wide range of Sherlock Holmes materials produced including many fine (and not so fine) films such as the recent blockbusters directed by Guy Ritchie.

Against this vast backdrop I will give my own experience and opinion as to the point of tie-in fiction and I will start by taking a couple of points of view; authority and motivation. I will also bring the conversation back to more familiar ground, that being the vast expanse of science-fiction tie-ins.

What do I mean by authority?

This is a label meant to cover the whole spectrum from fan-fiction to officially licensed products. This is a clear, unambiguous measure that I will be applying to various sources of tie-in material.

What do I mean by motivation?

There are a range of motives for producing tie-in fiction; these may be selfish or constructive. By constructive I mean example such as:

Motivation is also dependent on the beholder; I listed motives of those creating the material not those reading. There is another essay to be written about exploitation of fans and the failure of market forces to control the quality of material produced (and it is a much wider topic – football club strips spring to mind). There is still a discussion to be had about value for money and quality and probably many more dimensions to the analysis suggested.

Back in the 1980s I went to a few large science-fiction conventions. At one of these I ended up listening to a conversation between an up and coming author and someone they knew. The conversation went something like this:

“Hi, Jerry (made up name), what are you up to these days?”
“Still working on Star Trek tie-in novels,” said Jerry sheepishly.
“What are you doing wasting your time on those for? You can do better.”
“The problem is the money. It doesn’t matter what you write it’s guaranteed to sell in buckets.”

I found this interesting and now I am moving into freelance writing myself I can appreciate that a regular chunky income is probably more attractive than starving as you write the next great novel. I can also list any number of authors who moved from tie-in fiction to much bigger things (the world of Doctor Who is riddled with such). There is though this suggestion that quantity dilutes quality.

The other aspect I wanted to touch on is those (mostly fans) with an axe to grind who want to use the kudos of a major series to justify their own existence, air a grievance or grind an axe. We are all human and this probably doesn’t matter if nobody gets hurt. Most of this applied to fan-fiction which is normally free so the only cost is the time it takes to read.

Now let’s turn to the world of Doctor Who. As the show died the tie-in fiction world exploded with both novelisations of TV episodes and ranges such as the Virgin New Adventures. The whole ‘what happened to the Doctor and Ace’ timeline was explored in some depth. The most iconic of these might be the Marc Platt story Lungbarrow which took the so-called Cartmel Masterplan to its conclusion.

When the Eighth Doctor made a very brief appearance on TV it was quickly followed by more than 70 novels (of varying quality to be sure) that really did cover every angle of what the show meant or could mean. We had the creation of the Faction Paradox and many authors coming through now regularly connected to the TV show itself.

Against all this is of course the four series of fan-produced Audio Visuals that acting as an incubator for many of the talents that went on to form Big Finish and work on the show itself.

So what is the point?

What I am suggesting is that the point can be whatever you want it to be and it depends on who you are. As a sub-genre it is not going away any day soon and the example of Fifty Shades of Grey emerging from the confines of Twilight fan-fiction shows that anything is possible (I mean in terms of publishing success, not the content of the book)!

The point then is like all things a matter of perspective and any opinion as to quality and relevance can be made depending on how you are and how you consider it. I don’t believe it needs defending, it is its own thing.

Freelance writer. Doctor Who, Hawkwind, and Reading FC fan. Blogger and contributor to various magazines. Follow me on Twitter @helmstone and check out my Doctor Who blog redrocketrising.com.