Celebrating Tie-Ins #8: The expanded universe – past, present, and future 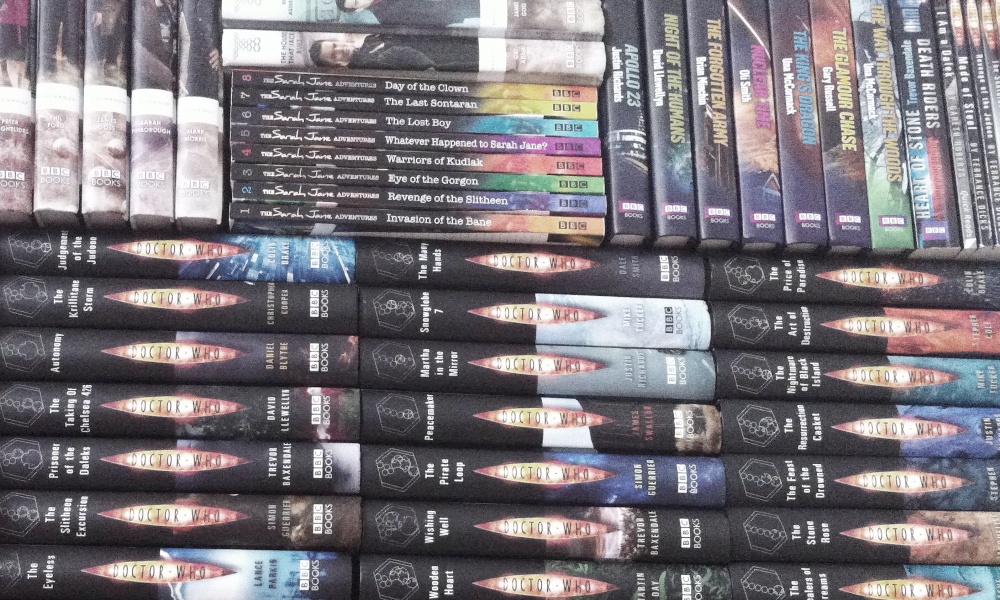 TV tie-ins. Where would fans be without them? Why, they might be forced to wander, lost and friendless, through the vast wasteland of televised repeats until the beginning of the next season; or, worse yet, stranded alone in the purgatory of a post-cancellation world… oh, the horror!

The tie-in, sometimes called the “expanded universe” or “extended universe”, is an evolution of the pastiche. However, whereas a pastiche generally takes place outside of the realm of copyright protection (think Sherlock Holmes), the tie-in is firmly under the control of the original television property’s owners. The copyright holder may choose to commission tie-in media directly, or sell the rights to a third party. In either case, the original owner almost always has the ultimate say in what may or may not be sold under the franchise name. This is also one major aspect of what differentiates tie-ins from fanfiction or other fan productions.

Travel back with me (using your time machine of choice) to the days before the internet. Before LiveJournal, before online forums… before – gasp! – Usenet. Dinosaurs roamed the Earth, although to be fair, they weren’t very scary since they used really lousy animation and stop-motion effects instead of CGI. Fanboys and fangirls, dressed in simple animal skins, huddled in their caves waiting for the next quarterly mailing list of paper fanzines (yes, paper!) to arrive via snail mail.

In the background, manila envelopes stuffed with corrected fanfiction manuscripts, dripping red ink, trundled along in the backs of mail trucks, shuttling back and forth between aspiring authors and ‘zine editors. Once an editor had collected enough material and whipped it into readable shape, the ‘zine was typed up, any illustrations were taped or glued into place, and the precious proof was hauled to the nearest library or office supply store with a mimeograph or photocopier. For the low, low price of a few cents per page, the fanzine rolled off the press, ready to be collated by hand, stapled, and sold at sci-fi conventions or mailed off to the eager fans who had sent in orders by post.

Now, don’t get me wrong – reputable fanzine publishers have never sought to make a profit from their copyright-infringing creations. However, because paying copier costs for a few hundred copies of a 75-page ‘zine could quickly run into the thousands of dollars, it was necessary to pass on the cost of printing and mailing to the purchaser. For this reason, a single fanzine generally cost between eight and fifteen dollars in the United States, back in the seventies and eighties. It was a price that many were willing to pay. Small wonder, though, that the appearance of officially-sanctioned paperback tie-in novels was seen as something of a godsend.

“Hang on a minute!” said every fanzine-buying fan ever. “You mean I can get 200 pages of professionally-edited fiction featuring my favourite characters for less than six dollars, and a new one will be released every single month?! SIGN. ME. UP. Seriously. Shut up and take my money!”

Mind you, things are a little different today. The internet now allows instantaneous self-publishing and free worldwide distribution of fanfiction, right from the comfort of home. In a major fandom, one could easily spend the rest of one’s natural life reading the existing body of fanfic found on only one or two large websites. In this free-for-all that is literally free for all, how can tie-ins maintain their relevance?

The first way is by guaranteeing a quality product. In the days of paper ‘zines, most fan fiction was at least funneled through an editor who had some sort of vision of the finished product. But even then, there were some real stinkers to be found. These days, a major internet clearinghouse for fanworks like FanFiction.net is a scary, scary place for grammar nazis… or lovers of coherent plot and characterisation, for that matter.

The tie-in offers assurance that the work in question meets a baseline level of professionalism. Mr Spock will not passionately seduce an ensign named Mary Sue; the Doctor will not pick up a sub-machine gun and start mowing down the enemy forces because their leader called Rose a chav; the words “and then they done sex” are 100% guaranteed not to appear. (At least, not in that order.) Ironically, however, even when purchasing a licensed tie-in novel, you may still end up reading material written by a fan. Many tie-in novel series have drawn authors from the pool of fanfiction authors within that franchise, allowing those people to break into professional writing. Just ask Paul Cornell.

These days, though, the most exciting tie-in concepts can arguably be found in media other than print. Video games offer a degree of interactivity with a fictional universe not found in other genres, and may appeal to a demographic that doesn’t readily consume more traditional fannish fare. And finally, audio drama allows actors from a defunct series – or an unusually long-lived series – to reprise their roles in new adventures, sometimes decades after the end of their television stint.

With more depth than a simple audiobook, full-cast audio drama offers perhaps the closest thing a fan can get to new TV episodes, in situations where no more actual TV episodes will be forthcoming. Big Finish Productions is probably the poster child for this type of audio tie-in, worldwide. Again, the company had its roots in unlicensed fan productions, and eventually managed to parlay the experience and expertise gained during that period into non-exclusive rights deals to produce audio plays for several different cult TV shows, most notably Doctor Who.

Can you find unlicensed fan audio productions for free? Yup. You can even find a few examples of fan audios featuring the original actors, though the character names and other aspects of the TV universe are generally fudged to discourage copyright infringement lawsuits. But you’ll be hard pressed find the level of sound design, professional writing, and acting skill found in a licensed tie-in.

So, what is the future of the “expanded universe”? In this era of explosive growth in technology, the possibilities for future tie-in products utilising cutting-edge CGI and interactivity is exciting indeed. By exploring new media and maintaining a commitment to quality, it’s likely that TV tie-ins will continue to bring value to devoted fans, ensuring their continued relevance in the twenty-first century and beyond.