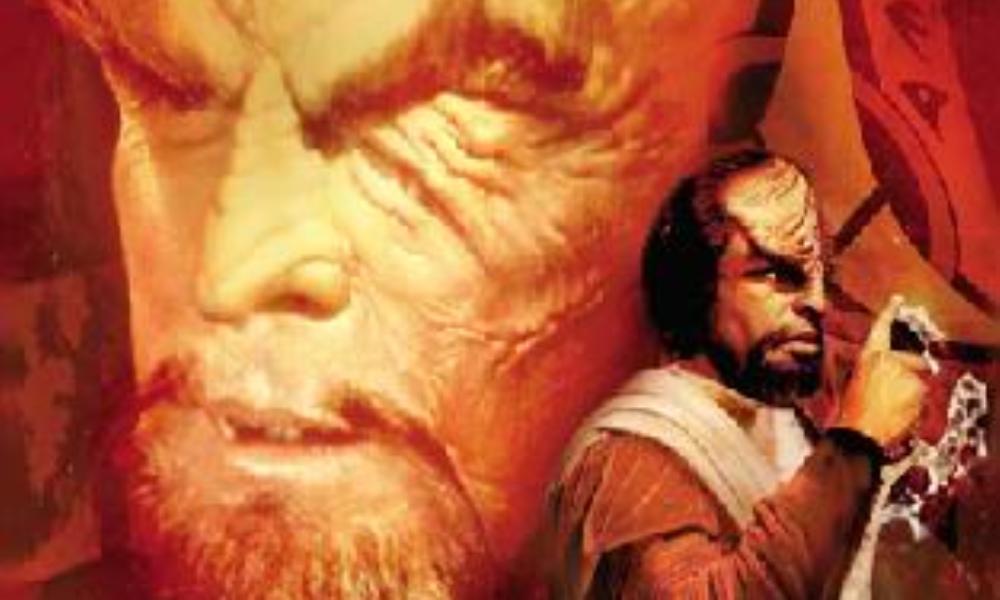 I’m supposed to talk about my favourite tie-in novels, huh?

You know, usually when such a topic comes up, for example on message boards, I just post those books I gave the highest scores, but this time I want to give a more nuanced answer highlighting the different reasons why a novel can become a favourite of mine. The novels listed here are not my top five, top ten, top whatever novels, and I will skip over some that fall into a category I already covered with a different book, but I hope doing it this way gives you a more rounded view on what it being a favourite tie-in book for me entails. (A little note in advance: please excuse my excessive use of Deep Space Nine novels as examples, but I guess I just can’t hide that I’m a Niner at heart.)

I think to start this off I should talk a bit about my history with tie-in literature. I have been reading Star Trek novels regularly for about 15 years now, but the first line of tie-in novels I followed religiously was actually the series of original X-Files novels mainly written by Kevin J. Anderson and the late Charles L. Grant, which I read in the mid-to-late nineties. While I have to admit that I don’t remember all too much about them these days, and that I don’t have any of them anymore – I think I sold them on a flea-market some time ago – I remember that at the time I really loved them. I’m not sure how well they would hold up upon rereading these days, but nonetheless I would consider them sentimental favourites of mine. The same is true for my very first Star Trek novel by the way. While Enterprise: The First Adventure by Vonda N. McIntyre isn’t really more than an average novel, it still has a special place in my heart simply for being my first step into a favourite pastime of mine for one-and-a-half decades now.

Then there are those tie-in novels that you just know would work every bit as well, even if the reader had never heard a single word about the series it ties in to. My prime example for that, and a true favourite of mine, is Una McCormack‘s Star Trek: Deep Space Nine novel The Never-Ending Sacrifice. Even if you had never heard about Rugal, Bajor, and Cardassia before, this coming-of-age story is just written so well that even the uninitiated will be sucked in by the terrific world-building and the journey of Rugal from the slightly obnoxious, rebellious teenager caught between two cultures to the young man carving out his own place in the universe. And hey, if you happen to be one of the initiated, that just will make the book that little bit better.

Another favourite of mine is another Deep Space Nine novel: Fallen Heroes by Dafydd ab Hugh, but for totally different reasons than The Never-Ending Sacrifice. Fallen Heroes is a novel written and published while the show was still on the air, which means that the reader knows that by the end of the novel everything will be back to where it was at the start – basically a “put the toys back in the cupboard the way you found them” rule. During the course of the book, ab Hugh decidedly does not handle his toys with care, and like every avid reader I was aware very early on that by the end everything would be back to normal again. But guess what? I didn’t really care – or, more to the point, it was a positive thing: knowing that everything would be back to normal made it even easier for me as a reader to join ab Hugh in his glee about killing most of the series regulars in some very creative ways. Add to that that he showed a good grasp of the Odo and Quark dynamic and you get what I would call a “fun romp” favourite. I know “fun romp” is a somewhat overused and often looked down upon term used by reviewers, but for me it just means it is a well-written novel which doesn’t take the subject matter too seriously, while still staying true to the subject matter and telling an interesting, enthralling story. Another author very good at writing such stories is Peter David who (co-)wrote some other “fun romp” favorites of mine like I,Q, Q-in-Law, and Before Dishonor to just name a few.

Ishmael, a Star Trek: The Original Series novel written by Barbara Hambly is a favourite of mine in yet another “category”. In this novel Spock is catapulted into the nineteenth century and it is a prime example of a “fish out of water” novel done well, showing a known character in a different setting than usual. Of course there is a science-fiction story in this novel, but much of its charm – at least for me – came from watching Spock adapting to his new circumstances. Other favourites in this category include DS9: Rising Son by S.D. Perry or the early TNG novel Masks by Michel Jan Friedman.

The other side of that coin is those novels that transport other parts of (popular) culture and integrate it into the tie-in property. Not to get too one-sided, but the novels that best show what I mean by that are two DS9 novels yet again: The Left Hand of Destiny duology written by J.G. Hertzler and Jeffrey Lang. I’m sure there are people who think it’s easy to take the Arthurian legend and “just” tell it with a Klingon cast, but in my opinion the two authors did a terrific job in combining two themes that are not necessarily the first match you think of, and manage to stay true two both. You never feel as if the authors shoehorned Trek characters into positions within the Arthurian legend they aren’t fitting for, for example.

Last but not least, let’s talk about the tie-in novels that most people who aren’t familiar with the tie-in industry think of when hearing about tie-in novels: the novelisations. When revealing that I read tie-in novels I have heard quite a few times something like: “Isn’t it boring to just read what you’ve already seen on screen?” As most people reading this probably know, novelisations are only a small fraction of the tie-in novels out there, but even for that small fraction the question above is kind of insulting. Of course, there are quite a few novelisations that are really boring, since they don’t offer anything new about the film, episode, or game in question and are only a simple retelling (more often that not at the behest of the producing studio), but a really well done novelisation can and should enhance the experience of the piece novelised. Far Beyond the Stars is a terrific, well-loved Deep Space Nine episode; I’m sure a lot of people would say there’s little that could be done to make it even better, but the novelisation by Steven Barnes heightened my estimation of the story told from very good (the episode) to truly excellent and outstanding (the novelisation). Barnes added so much background to the world Benny Russell lives in, that at times you really forget you are reading a Star Trek novel and not a piece about the 1950s in Harlem, while maintaining the feel and message of the episode.

As indicated above there are a whole lot of other tie-in novels I would call favourite of mines, but I hope this piece gives you a better understanding on where I’m coming from when writing my reviews.