The Scarifyers: The Thirteen Hallows review 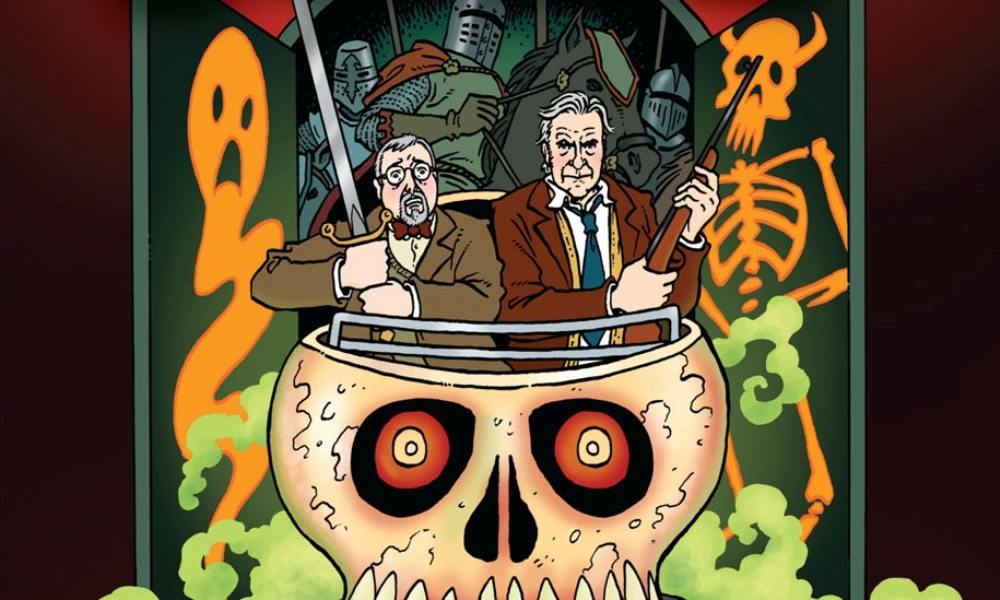 The last few instalments of The Scarifyers have seen some necessary transitioning, as Inspector Lionheart (played by the dear late Nicholas Courtney) had to be written out and replaced by Sergeant Crow. But with The Thirteen Hallows, we have a settling into place: the actor gets the character, the writers get the character, and the character gets the setup. So, we can plunge headlong into the zaniness that is The Scarifyers and MI-13.

The Thirteen Hallows might not bring a lump to my throat like The Magic Circle did, but it’s certainly the funniest and zaniest instalment of The Scarifyers since The Secret Weapon of Doom. Simon Barnard and Paul Morris’s story opens with an over-the-top balls-to-the-wall mud-slinging chess match, and it never lets up from that point on. We get a ghost horse named George, an exhibition on Anglo-Saxon farming techniques, the worst Knight of the Round Table, singing eggs, the Welsh, a plot to destroy Great Britain, the best Star Wars pun I’ve heard in a long time, and a carnival fun-fair. It’s all the wackiness anyone has ever wanted out of The Scarifyers, and I am pretty sure that my fellow pedestrians though I was a crazy person when they saw me laughing so hard.

David Warner has really settled into the role of Harry Crow at this point. He’s like Lionheart enough to fill the same plot function, but he’s a little crustier and he suffers fools and the Welsh a lot less gladly. But he rises to the occasion when he needs to, such as his fantastic escape attempt with the Thirteeen Hallows. If there’s any fault one can have of Crow, it’s that there isn’t quite the same level of friendship between Crow and Professor Dunning as there was between Lionheart and Dunning — but there’s plenty of time for that yet.

Terry Molloy is as fun as Dunning as always: the poor fellow has turned “long-suffering” into an art form. This time, Dunning is paired with a crazed Arthurian knight, and hilarity ensues nearly as often as tragedy and desperate misunderstanding. As always, David Benson plays multiple roles; the highlight in this case being the very addled Welshman Mr Merriman, but I was pleased to hear his character Alexander Caulfield-Brown make a reappearance. Caulfield-Brown is what one imagines one of Wooster’s dull friends from the Drones would be like if they ran a secret government organisation, but he even manages to get his sterling moment here.

The acting highlight of the story, though, is Gareth David-Lloyd, known to you and me as Torchwood’s Ianto Jones. If there wasn’t a photo of him in the booklet, I wouldn’t have believed it. The cast of Torchwood turned “morose and gloomy” into an art form, but David-Lloyd’s character here is boisterous, excitable, bloodthirsty, enthusiastic, and near-sighted — everything Ianto Jones wasn’t. And yet he’s amazing! I wouldn’t have expected it of him, but there he is, and he’s brilliant. It’s a shame we probably won’t be hearing from this character again, but I hope Bafflegab Productions makes some other use of Mr. David-Lloyd’s apparent talents.

As far as I know, the next Scarifyers release hasn’t been announced yet, but I’ll be there to pick it up as soon as I can — and so should you. Begin from the beginning if you must, of course, but The Thirteen Hallows is as brilliant a jumping-on point as any Scarifyers release, and brilliant on its own merits to. Crow and Dunning are Britain’s best.