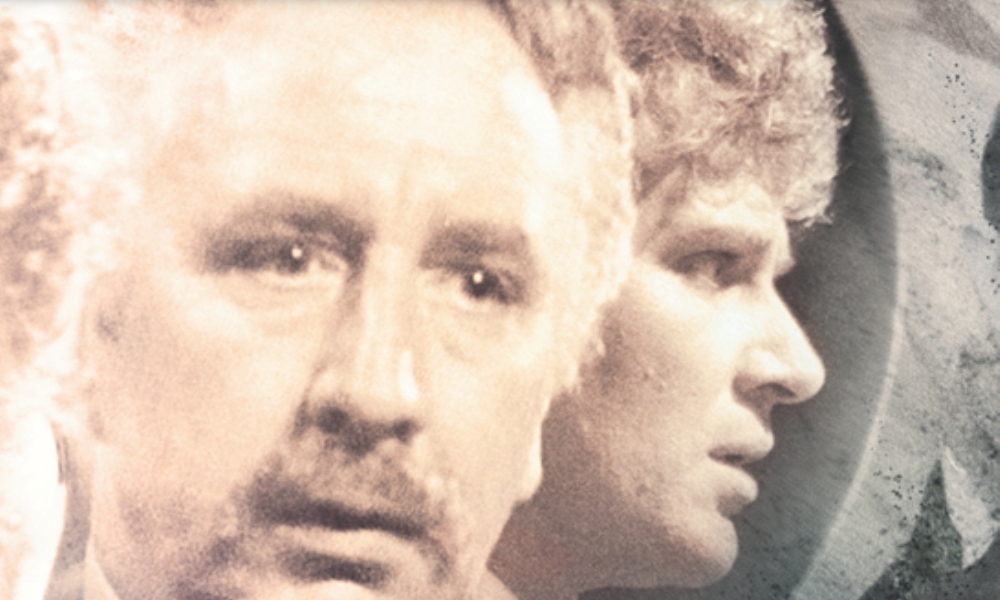 When I listened to the first series of Jago & Litefoot, I enjoyed it, but I didn’t enjoy it enough to pursue the series into its later series. There was some potential — I loved the two leads, of course — but I often found the plots on the weak side. But when Big Finish announced that part of the big specials deal I’d preordered would be two Doctor Who adventures featuring Jago and Litefoot, I knew I’d have some catching up to do, and so here I am at Series Four.

Series Three added Leela as played by Louise Jameson to our investigators of infernal incidents, as always played by Christopher Benjamin and Trevor Baxter; Series Four adds Colin Baker to the mix, playing the mysterious Professor Claudius Dark — not that he does a whole lot at first. His appearance in the first episode, Nigel Fairs’s Jago in Love for example, is limited to material recapped from the end of Series Three. But that’s okay, because Jago in Love is a solid opening story, featuring exactly what the title implies. On a trip to Blackpool to decompress after the events of Series Three, Jago falls in love with a music-hall singer, while Litefoot falls afoul of a much more mysterious course. This is definitely the lightest of the Series Four stories, but it’s enjoyable enough, especially the conviction with which Benjamin plays the romance. That the object of his desire, Abigail Woburn, is well-played by Elizabeth Counsell probably helps too. But it’s not all love hijinks; Fairs works a compelling mystery into the piece that managed to surprise me. (I often found in previous series that some stories would play out old horror tropes a little too obviously.)

After a strong Jago & Litefoot debut in Series Three’s Swan Song, John Dorney returns with Beautiful Things, which was certainly my favourite story of the season. The real highlight of the piece is the appearance of Oscar Wilde. The cast have a wide range of reactions to the fellow, from Litefoot’s aggravation to Jago’s fawning to Leela’s disgust. Alan Cox (previously Mark Seven in The Daleks: The Destroyers) plays Wilde with a slight Irish lilt, an interesting but plausible choice. More importantly, he manages to make Wilde sound weary and witty, reading Dorney’s lines the way they were meant to; there’s a great alliteration competition with Jago that had me shaking. But Dorney doesn’t just give us a good character, as Beautiful Things provides a range of complicated and interesting ideas, setting up some cool mysteries with great resolutions.

Also debuting in Series Three and returning in Series Four is Matthew Sweet, one of my personal favourite people in general, as someone who manages to both edit Penguin Classics editions of Wilkie Collins novels and write Doctor Who audio dramas. I found The Lonely Clock a little less successful than the previous series’ The Man at the End of the Garden, though. There’s some great tension at the beginning (and kudos of course to Lisa Bowerman’s direction and Steve McNichol and Kelly Ellis’s sound design) as Jago and Litefoot try to piece together what’s happening to them, and I liked the way these events were intercut with what Leela and Ellie (the ex-vampire barmaid at the Red Tavern) were up to. But in the end, it all seems a bit too unnecessarily complicated given the explanation we get. Evocative imagery, though, which seems to be a specialty of Sweet’s. Victoria Alcock is great as this story’s principal guest star, Winnie, making her villainous character charming and shifty at the same time.

It all ties up with Justin Richards’s The Hourglass Killers. I often find that Richards’s stuff, even though he script-edits Jago & Litefoot, is a little weaker, but he is seemingly more adept at the series closer than the series opener. The Hourglass Killers draws together the threads that have run through the whole series, and it probably helps that Series Four feels more integrated than previous series. It also helps that this is the one where Colin Baker comes forward into the limelight. Baker’s character is kept shady much of the series, but his identity seems fairly obvious, and this story confirms it. The interplay between him, Jago, Litefoot, and Leela is great, but The Hourglass Killers also has some of the best villains that Jago & Litefoot has had thus far, not to mention some great ideas and some fantastic character moments: especially Jago pretending to be Colin Baker’s character! All that and Terry Molloy makes for the best series finale so far.

Though it stretched the format a bit more, I actually think that Series Four had more “proper” Jago & Litefoot stories than Series Three, and in the end, it was probably the most consistent series thus far. Some of this is definitely due to the excellent villains, Mr Kempston and Mr Hardwick (played by Christopher Beeny and Mike Grady), who manage to be suave, funny, creepy, and charming all at once. I liked all four stories to varying degrees, and the leads are as always fantastic. They get some different material here than they’ve had before, but they rise to the occasion. I look forward, more than ever, to seeing where the investigators of infernal incidents end up next.