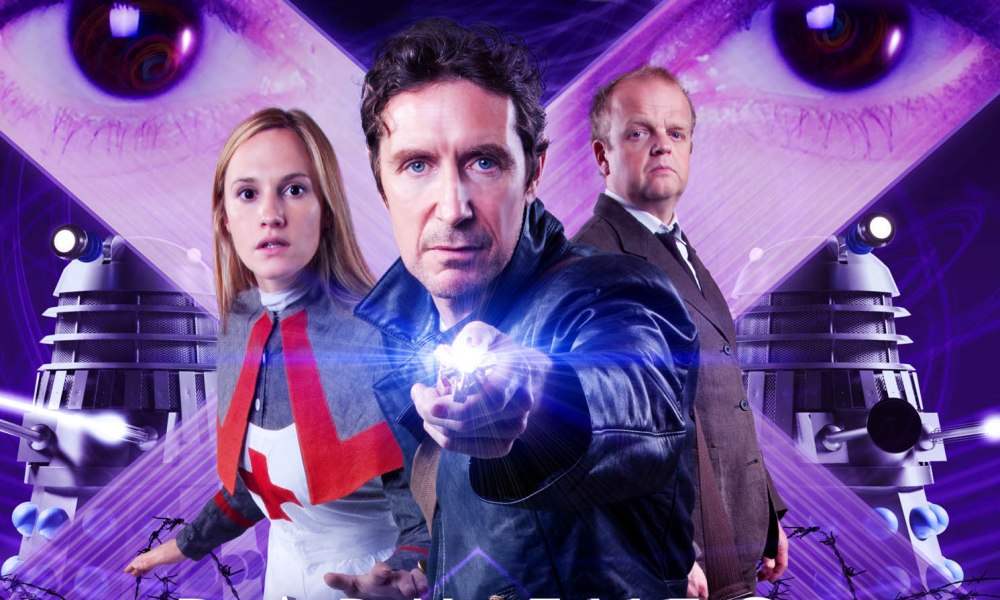 When we finished listening to To the Death, my wife looked over at me and said, “I kinda hope they don’t ever follow that up”. She had a point: the triple death of Lucie, Alex, and Tamsin put the Doctor in one of the bleakest spots he’d ever been, and it seemed right that he’d go from that story off to fight the Time War and become the angsty, damaged Christopher Eccleston.

And for a while it seemed like Big Finish agreed, as all we’ve heard of the Eighth Doctor since then is a return to his joyous, youthful days with Mary Shelley in tow. But to cut off “new” Eighth Doctor stories forever is probably more than Big Finish could ever willingly do, and so here Dark Eyes is, a shiny four-CD boxset to tell us what happens next — complete with Paul McGann wearing a leather jacket on the cover!

The opening of Dark Eyes’s first episode, The Great War, impressed me. It felt completely and utterly new. The Doctor, distraught with grief, was pushing the TARDIS to go further than it had ever gone before, outside the limits of material reality. I felt like I was blazing into unknown territory. But Straxus, the Time Lord that the Doctor and Lucie met in Human Resources and Sisters of the Flame, popped up, with an offer. What was it?

I didn’t know, because all of a sudden it was World War One, and the Doctor was on a stretcher. Writer/director Nicholas Briggs (him again, eh?) and sound designer Andy Hardwick give us so much atmosphere I’m surprised anyone out there can still breathe: it’s World War One, completely brought to life on my earbuds. Grimy, cold, and then when something starts moving at night… the Doctor is on the periphery for the beginning of this, but it really works. We don’t know what he’s thinking in these difficult moments, and him being sharp is all the more painful. We’re soon introduced to Molly O’Sullivan, an Irish VAD (not a nurse) who narrates by reading… letters… to… her… mother… aloud… as… painfully… slow… as… possible… because… she… apparently… has… to… sound… out… every… word. You know those Irish. Actually, Ruth Bradley does a great job, and though you’re clearly supposed to like her, you do come to like her pretty quickly. (Except when she says, “Tardy-box.” You know those Irish.) The Great War is all around pretty enjoyable: the Doctor, Molly, and Straxus on all on fine form, and the Doctor is soon up to his ears in good old-fashioned problem-solving in the midst of World War One. Maybe the best and certainly the most impactful episode in the box.

Fugitives gives us a Doctor and Molly on the run from the Daleks, from World War One to the Dunkirk evacuation to the 1970s and beyond. (Meanwhile Straxus tries to kill himself.) Things haven’t really let up since the last few scenes of The Great War, and that relentless pace is kept up here, the Doctor absolutely insisting that he will not lose someone else to the Daleks. It doesn’t let you breathe and Alex Mallinson plays a cabbie, and I was quite into it, especially when the Doctor and Molly get out into space. The third episode, Tangled Web, though — that was the highlight of the boxset for me. Paul McGann gets some real meat to chew here as the Doctor, and there are some interesting loops and diversions, even if I never quite untangled all of the webs or figured out who had spun them and why.

Of course, it all has to end in X and the Daleks, and Nick Briggs perhaps hashes this up as he usually does; a little too much arbitrary technobabble again, and the ending doesn’t quite justify all the stuff that came before it. (Can someone please teach Briggs what a particle really is? It basically means “magic spell” in his stories, I think.) But that doesn’t really matter much, in the scheme of things, I think, if you’ve enjoyed most of what else is going on, and even though X and the Daleks is the weakest episode, it’s still enjoyable, especially the Doctor’s interactions with Nadeyan, excellently played by Ian Cullen (Ixta in The Aztecs, you know).

So is the Doctor here a terrible, distraught, pessimistic wreck? No, not really. He’s a bit harsh at first, but he soon becomes his old self. Which, really, is what anyone who’s seen the Doctor move on from C’rizz, Charley, Rose, Martha, Donna, and Amy by becoming entangled in a fresh new adventure would expect. There’s an imaginary world, perhaps, where the Doctor stays bitter and angry and becomes a heartless warrior and is rehabilitated by Rose after bombing some Nestenes, but in any world where we actually have to see and/or hear the Doctor in action, I don’t think that’s a viable option for Doctor Who. Nick Briggs brings the Doctor back from the brink in sharp form, though; my favourite parts of Dark Eyes were the various discussions of “hope” sprinkled throughout.

There’s a lot else to enjoy. Kudos to Beth Chalmers for playing two characters in The Great War, who sometimes share scenes, so that I didn’t notice! On the other hand, Tim Treloar doubles up as two different Time Lords in Tangled Webs, and I couldn’t tell the difference. It’s a shame that Big Finish couldn’t/wouldn’t get Nickolas Grace back as Straxus. Peter Egan is good, but he doesn’t play the role quite as humorously officious as Grace does. Mind you, that might not have been appropriate for the character as written here.

The standout guest star of this box is Toby Jones as Kotris, the mysterious “X” of the Time Lords. He’s great, of course, one only wishes that he could have had more scenes opposite our main characters, rather than the Dalek Time Controller. Speaking of which, the old fellow is back from the brink again, having been destroyed in both Patient Zero and To the Death. Probably hoping to be the next Master. I think it’s funny that Nicholas Briggs claims on the extras that he can’t and won’t show the Time War, but what we get here is basically the Time War if you think about what both the Daleks and the Time Lords are actually doing.

And then there’s the leather jacket. A lot of attention is paid to the Doctor’s frock coat in The Great War and the beginning of Fugitives, and then it’s not mentioned again… nor is a change of clothes. A bit odd, that. But we can see it on the covers, and we can guess when he changes (and gets a haircut!?). Paul McGann talks about the backstory of this change on the extras, and though it’s not really pointful to change a character’s appearance on audio, the Sixth Doctor created some precedent for it in Real Time, and just look at that cover: it screams “bold new direction” if anything ever did.

I don’t know when I was last excited for a Paul McGann story as I was going into Dark Eyes (maybe Neverland?), and though it didn’t live up to my expectations, they were certainly very high — and the set hit most of them. Enough that I’m already salivating over the possibilities of the just-announced Dark Eyes 2. (Darker Eyes?) Don’t ever send the Eighth Doctor off to turn grumpy and Eccleston-y, Big Finish. Continue to give him the biggest life any Doctor has ever had.