Doctor Who: Gods and Monsters review 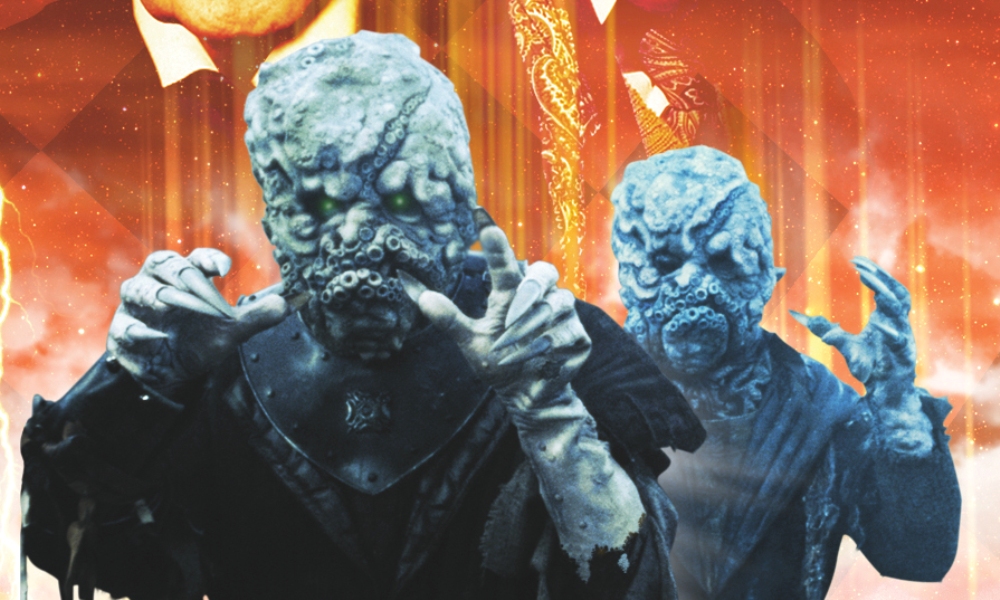 Gods and Monsters marks an end to a story long in the telling. It doesn’t just encompass this trilogy-plus-one (Protect and Survive, Black and White, Project: Nirvana) with the black and white TARDIS crews, nor the threads of the Doctor’s conflict with the Gods that goes back to The Magic Mousetrap, nor even the introduction of Hex in The Harvest. Alan Barnes and Mike Maddox’s script plays a long game, with reaping seeds sown in some of the earliest Big Finish releases and even in the Seventh Doctor’s on-screen stories.

A long game is appropriate, of course, because that’s what the Doctor is playing as usual. At the opening of Gods and Monsters, there’s just one TARDIS again, and it’s landed in the opening moments of the universe, so that the Doctor and his two TARDIS crews can play a chess game with Fenric. The Doctor’s been preparing for this for a long time, but he’s still been caught unprepared. Ace, Hex, Lysandra, and Sally have to find him — and find out what’s even going on.

This is the third time that Alan Barnes has co-written a conclusion to a “big” arc, and Gods and Monsters is definitely more satisfying than either Zagreus or The Next Life. As in those stories, he’s clearly working to keep the big story from swamping out the small ones; this isn’t just a story of gods in conflict, but of the Doctor’s companions learning about themselves and about him. Sort of, anyway. Perhaps the biggest failing of Gods and Monsters is that its small-scale stories don’t succeed in coming through the way you think they should.

Ace is returned to Perivale, a great idea as we haven’t seen her there since Survival, and Ace has matured a lot since then. But this is just a short visit, and not much is made of it. Similarly, Lysandra and Sally witness their own futures in a very chilling cliffhanger, but this has more plot significance than character significance. Perhaps worst of all, this is a pretty key story for Hex, but you wouldn’t know it, as he spends most of his time lugging around a magic shield that he picked up in Black and White. The previous stories promised a reckoning with the Doctor for the grueling effects of his absences, but we don’t get that here.

Oh, but if it has to be plot-driven, what a plot it is. There are a couple good twists, and it’s filled with neat ideas: the game-board itself, the hammer Ace wields, the backstory of the Forge even. Sometimes you feel like the characters are running around a bit too much, but it’s in service of a lot of interesting stuff, and some good surprises.

The cast rises to the occasion, of course, except that Sylvester McCoy being “crazy” is about as bad as you’d expect. But Sophie Aldred sells some slightly dodgy stuff, and Philip Olivier in particular has a fantastic moment. I hope this isn’t the last we’ve heard of Maggie O’Neill or Amy Pemberton, either. Tim Treloar and Blake Ritson are the highlights of the guest cast; two characters with some good tragedies in their lives, and it’s a shame that they don’t have more to do. And don’t look at the guest cast yourself, as there’s one return appearance that I didn’t expect at all.

If there’s a weak link performance-wise, it’s John Standing as Fenric, though surely this is partly due to the writing. In The Curse of Fenric, the god himself didn’t turn up until the very end, possessing a complex and interesting guest characters; he’s here from the beginning, snarling and making grand pronouncements… and it falls flat for the most part without some emotional/character resonance to back it up. He’s just a bad supervillain without that, and it’s disappointing for what is ostensibly such an epic showdown.

I think, ultimately, that’s where Gods and Monsters goes astray. It’s good and sometimes great, the ideas are awesome, the performances solid, but The Curse of Fenric intimated at an epic story while showing us a fairly personal one: for the Doctor, for Ace, and for everyone else they’d run into. Gods and Monsters goes for broke in the epic stakes, and it leaves the personal too far behind as a result.