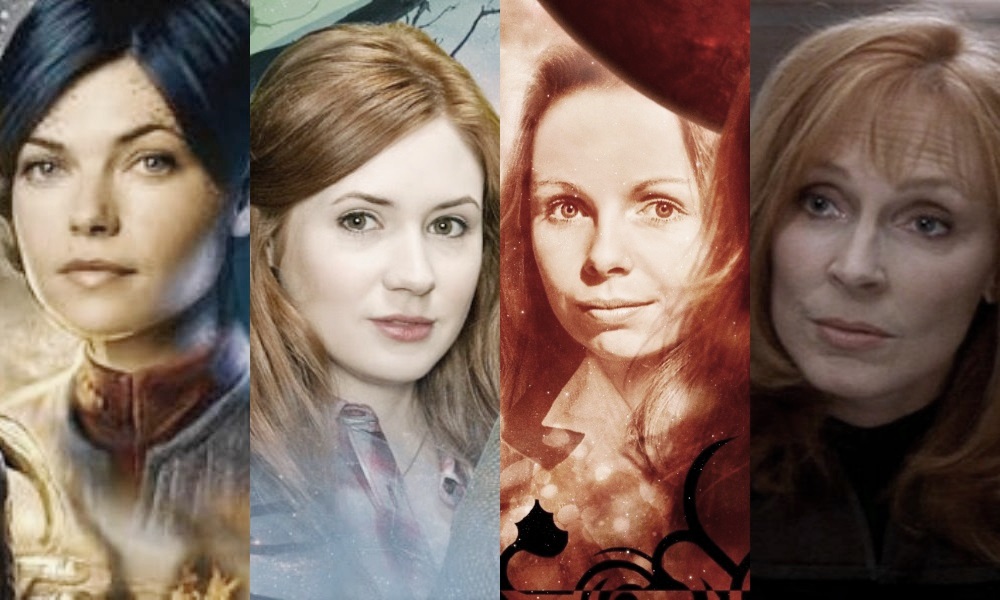 The last time we spoke to Una McCormack, three years ago, her award-winning Star Trek: Deep Space Nine novel The Never-Ending Sacrifice had just been released, cementing her role as the leading expert on all things Cardassian in Trek literature.

After that, she took a break from Star Trek, and concentrated her efforts on other projects, like her two Doctor Who novels The King’s Dragon and The Way through the Woods. But a few weeks ago, she returned to Trek with Brinkmanship – her first non-Deep Space Nine novel in the Star Trek universe.

“Brinkmanship follows the Enterprise on a diplomatic mission to the Venette Convention,” Una explains, when we catch up with her during a rare gap in her busy schedule both as a writer and a university lecturer. The Venette Convention is “a small interplanetary civilisation that is about to lease several of its bases to the Tzenkethi. Representatives of the Khitomer Accords are concerned that the Tzenkethi may be planning to militarise these bases, and are obviously keen for this not to happen. [Captain Ezri] Dax and the Aventine go to one of these bases to find out whether or not it’s being militarised on the sly. The story examines the effects of mistrust between all these various characters.”

Brinkmanship has been released under the Typhon Pact banner, as part of the ongoing narrative that’s united the various Star Trek series as the Federation faces a new power bloc – the eponymous Pact – formed in the wake of a devastating Borg invasion. But it is, says Una, essentially still a standalone novel, “using the ‘Cold War’ backdrop of the Typhon Pact as a setting for a Cold War-esque story.”

What are Una’s thoughts on the Pact as a device? It’s dominated the books since its inception, becoming the catch-all for most of the twenty-fourth century stories released in the last few years – what’s that like to work with as a writer? “I think it’s a very nifty device,” she enthuses. “The real Cold War gave us some remarkable fiction, and so a ‘Cold War’ style setting has a great deal to offer. Of course, I love writers like Le Carré, so I’m always going to like this kind of setting.”

It’s led to some darker, grittier stories – which haven’t always been popular with fans, given Star Trek’s generally optimistic view of the future. “I think [the stories] are darker and grittier,” Una agrees, “although I don’t think this is necessarily a criticism. It’s to my taste, certainly, although I hope that Brinkmanship has redemptive moments too.”

The book’s blurb paints it as a novel of two halves, divided between Captains Dax and Picard – “Dax and the crew of the U.S.S. Aventine are sent to investigate exactly what is happening at one of the Venette bases,” it reads, while “Picard and the U.S.S. Enterprise are assigned to a diplomatic mission sent to the Venette homeworld in order to broker a mutually acceptable resolution” – and both captains feature on the cover. Is it a fairly even split?

“All these plots strands are equally significant,” acknowledges Una, “and there’s also a very important strand that takes place on the Tzenkethi homeworld, and which doesn’t involve either Dax or Picard.

“Dax also gets involved in a smaller piece of diplomacy,” she points out, “negotiating access to the Venetan base with its commander – actually, commander isn’t the right word for a Venetan, but you get the gist. In the latter stages of the book, and without giving away too much, Dax’s mission becomes a race against time – perhaps suspense-driven is a better description than action-orientated.”

After having done so much world-building for the Cardassians in her Deep Space Nine novels, Brinkmanship’s focus on the Tzenkethi gave Una the opportunity to do the same for that species. “David R. George III had already done wonderful work with the Tzenkethi,” she reminds us, “creating the unusual interior spaces that the Tzenkethi prefer, and their fascinating system of naming. I had a great deal of fun exploring this new planet. I also loved what David Mack did for the Breen in Zero Sum Game, and wanted to do something similar for the Tzenkethi. I had a blast.”

There is also a Cardassian component to the novel, which allowed Una to add to the roster of Cardassian characters she has created. “I think these are All New Cardassians!” she says, pointing out two exceptions: “Glinn Dygan, who has appeared in other books, has an important part to play” – and, she adds sheepishly, “Garak has a cameo, because I can’t stop myself!”

As a result of the formation of the Typhon Pact and that subsequent cold war, the Federation strengthened its ties to friendly states and invited them to join the Khitomer Accords; the Cardassian Union is among them. Una thinks that “this is a profoundly interesting place for the Cardassians and the Federation to find themselves in: recent enemies forced to work together.

“Cardassia, after the Dominion War, is in the process of reinventing itself entirely, but Cardassian pride might find it difficult to have to work with the Federation and the Klingons.”

Would she be interested in exploring this further? Has she got more stories to tell about the planet? “I’d particularly love to go back to Cardassia,” she says. “It was nice to take a holiday [and work with other species], but returning to Cardassia always feels like going home.”

Nothing Star Trek-related is in the pipeline for Una at the moment, though her two aforementioned Doctor Who novels are still available. For those, Una placed the Eleventh Doctor, Amy, and Rory in fantasy settings. “The first, The King’s Dragon, is a thinly-disguised retelling of Beowulf – In Space!” she laughs. “There’s some treasure, and a dragon, and some space bureaucrats. The story was inspired by the discover of the Staffordshire Hoard: the largest hoard of Anglo-Saxon gold and silverwork yet found. It was discovered in a field in Staffordshire in 2009, and, like many others, I wondered who had abandoned these riches, and why, and whether they ever intended to come back and dig their treasures up again. I also liked the idea of blurring the lines between fantasy adventure and science-fiction.

“My second Doctor Who novel, The Way Through the Woods, let me play even further with writing Doctor Who as fantasy. It’s set in a small English village next to an ancient piece of woodland in which people have an alarming tendency to disappear… This is a classic fantasy story – the ancient woods that hold a secret, and in which people can get easily lost. I drew on multiple sources, such as The Wood Between the Worlds in The Magician’s Nephew, Mythago Woods by Robert Holdstock, and Rudyard Kipling’s poem The Way Through the Woods, which I’ve loved from childhood. The Fairport Convention song Reynardine was also very important to the story. The Doctor, Amy, and Rory try to prevent a disappearance, but – as ever – things get more complicated than they bargained for.”

Both books were part of the New Series Adventures line, and so were limited to 256 pages, which in comparison to the Star Trek titles of the last decade or so is pretty short. How hard was it for Una to stay within that frame? “I have the curse of brevity, and so I found it no problem at all,” she admits. “I thoroughly enjoyed keeping the books fast-paced.”

Can we expect new Doctor Who stories from her in the future? “I’d certainly love to go back,” she says. “As for ideas, I’ll keep those under my hat!”

She has, however, been working in the wider Doctor Who universe, via a long-running spin-off from Big Finish. “Gallifrey is an audio series that focusses on the political machinations surrounding Romana’s presidency,” she explains. “Leela is a significant character throughout too: it’s good to have a show where two of the leads are women. It’s a clever series which I very much recommend. I’ve contributed a script to Season Five [released as a box set in February 2013].”

But Una isn’t just active in various tie-in franchises. Over the last few years she also has written a bunch of original short stories in various genres. Readers who are fans of her tie-in work and are interested in her other short fiction, she suggests, “could start by looking at anthologies published by NewCon Press in which they appear: Dark Currents, Conflicts, and Subterfuges.” During her writing career up till now Una has “experimented with science-fiction, fantasy, thrillers, procedurals, and historicals.”, so in the future she would “like to try my hand at a non-speculative or non-genre novel.”

Between contemplating future stories and her work as a creative writing teacher Una certainly has her plate full, and we would like to thank her again for taking the time to talk to Unreality SF about her writing.

Brinkmanship was released by Pocket Books in September 2012. The King’s Dragon and The Way Through the Woods were released by BBC Books in July 2010 and April 2011 respectively.