Doctor Who: The Oseidon Adventure review 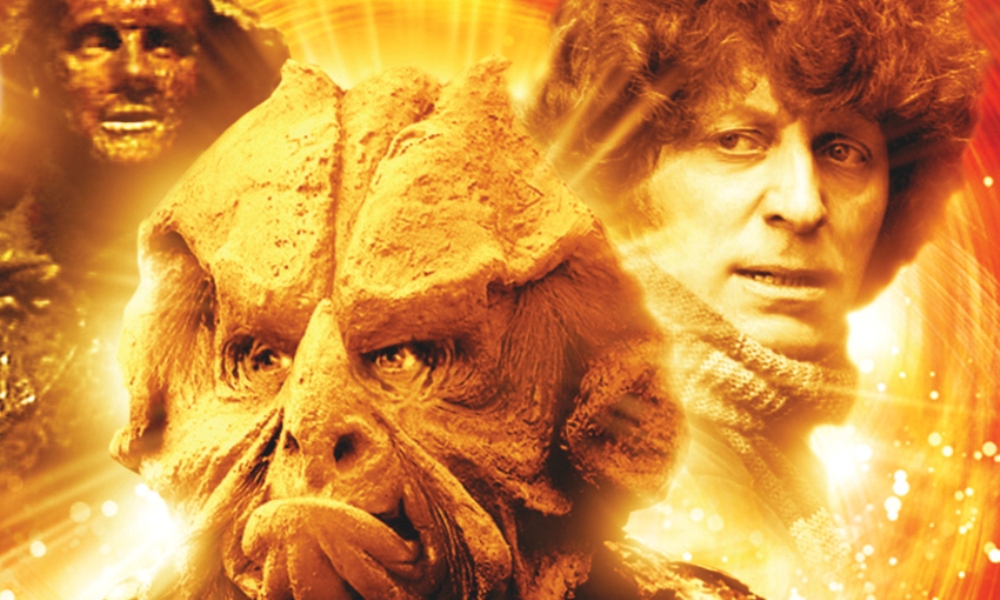 The Kraals are back! Yeah, I never thought I’d hear that sentence either, and I never felt that the world needed reminding of The Android Invasion. But here they are anyway, teaming up with the Master for The Oseidon Adventure as they invade the Earth with only the Doctor and Leela to stop them.

Though nothing about the Kraals particularly demanded returning, they’re okay enough here. The story is rather strongly built around their manufacture of android duplicates, and this makes The Oseidon Adventure work well enough, as in typical Alan Barnes fashion, we get an imaginative and crazy plot. So if you’re going to have a bunch of android duplicates, you may as well use the Kraals — though one suspects the starting point of this story was “Bring back the Kraals” and the endpoint was “Oh, they made android duplicates, didn’t they?” (I, for one, would have enjoyed a return to Tara, but I suppose that makes little sense with Leela or the Earth-invasion plot.)

Duplicates of duplicates become one of the story’s foremost devices, and it’s used in so many permutations that it never quite get tired. Unfortunately, the story does kinda try to have it both ways: it’s strongly implied that some of the Master’s lameness is due to him being a duplicate, but also we’re constantly told that all of the duplicates are exactly like their originals. So which way is it?

Though I love Geoffrey Beevers, ultimately the return of the Master is kind of a disappointment. He imbues every line with utter menace, but speak lines is about all the Master does: he’s constantly threatening people, but seems unable to hurt anyone. And though the plan he’s concocted appears quite clever, it’s too complicated by half once you realise what his goal is. So there are some great scenes, but also some underwhelming ones; literally everyone seems to have got the drop on him by the end of the story.

UNIT puts in an appearance. Obviously, the late Nicholas Courtney is nowhere to be seen, but that’s actually keeping in with the era: The Oseidon Adventure takes place not long after The Android Invasion and The Seeds of Doom, two UNIT stories featuring sub-Courtney Brigadier replacements. Android Invasion’s Colonel Faraday is actually reference in dialogue as being away in Geneva — the Brigadier’s usual excuse! One wonders if Courtney would have appeared had this story been made a couple years earlier, but Barnes actually uses the lack of both Lethbridge-Stewart and Faraday to good plot effect. Dan Starkey’s Captain Clarke was a likeable UNIT field commander; I hope we see more of him if there are more UNIT stories set in the 1970s.

I’d like to take a step back for a moment and talk about this first season of the “Fourth Doctor Adventures” as a whole, now that it’s come to an end. I was initially turned off by Big Finish’s marketing for it, since it was primarily nostalgia-based; I have no particular affection for Tom Baker over any other Doctor, and “Saturday night tea time in 1977” is an event I’ve literally never experienced. Destination: Nerva felt like it confirmed all my worst suspicions, but I found The Renaissance Man and The Wrath of the Iceni both very enjoyable — though Energy of the Daleks was a big, big low point.

The consistent strength of this season, though, has been Tom Baker and Louise Jameson. I mean, I knew they were good on television, but it’s easy to get complacent with that sort of thing; even in Energy of the Daleks, they’ve never done less than give the Doctor and Leela their all. Every word that comes out of either character’s mouth is a joy to listen to, and that’s no small feat. The writing helps, too, of course: though Leela is a great character, one often felt that Louise Jameson made her so by overcoming scripts that didn’t serve her well. Justin Richards, John Dorney, Alan Barnes, and even Nicholas Briggs have really played to her strengths in a way one more usually associates with a “modern” companion like Charley or Evelyn, and she’s been all the better for it.

So, to my surprise, I find myself actively looking forward to the second season of the new Fourth Doctor Adventures. Tom Baker in action again, Mary Tamm back as Romana, Jonathan Morris penning a Wodehouse pastiche, John Leeson back as K9, David Warner appearing in multiple episodes, and Nicholas Briggs writing 50% of the stories. What’s not to look forward to? (Don’t answer that.)