Professor Bernice Summerfield in the Masquerade of Death review 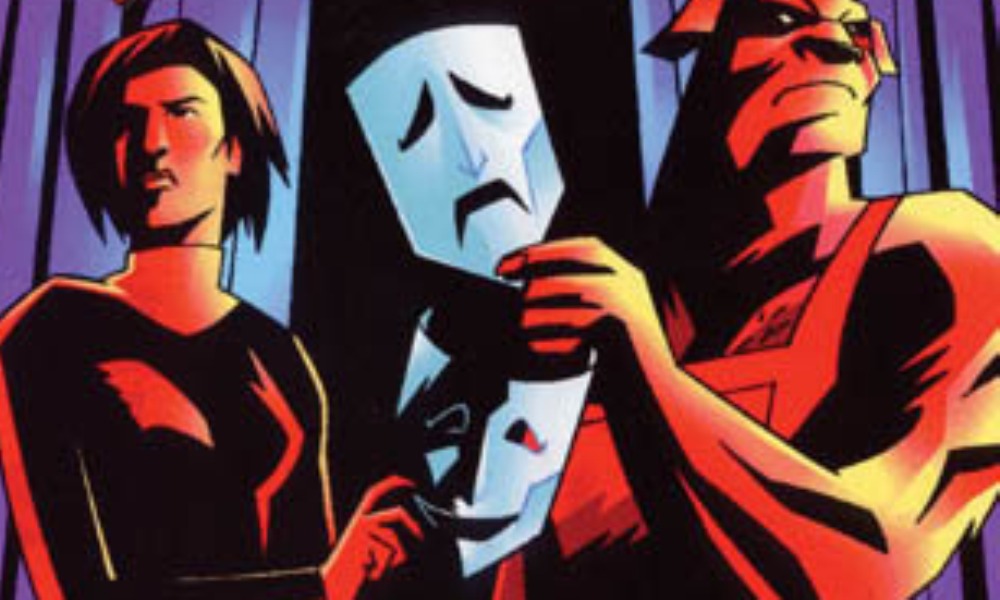 “You can’t have a good climax without some effective shouting!”

Bernice and Adrian are in Spring, where there’s been a murder. Only the Queen of Spring can’t quite tell who’s been murdered. Also Bernice and Adrian are sleeping together. And a mysterious Player has decided to dissect Bernice to prove to everyone that’s she’s fictional. And the dialogue is strange.

The last instalment of Professor Bernice Summerfield’s fifth season, Professor Bernice Summerfield in the Masquerade of Death by Stewart Sheargold, includes not a single returning monster and makes up for it by being one of the most original releases in the series ever. Unfortunately, “original” seems to largely translate into “completely baffling”. I mean, you eventually find out what’s going on on a macro level, but there are lines of dialogue and whole scenes even that still don’t seem to mean anything by the time you get to the end. I don’t mind working to enjoy something, but I do want to know why I’m working, and I don’t think The Masquerade of Death ever gives me a reason.

Also, proving that a fictional character actually is a fictional character… well, what’s the point? At one point someone observes that Benny acts inconsistently, like she’s the product of multiple writers. Yup, that’s true. I like metafiction as much as the next person (probably moreso), but it’s not clever by default. You have to actually do something with those ideas, and this story does not.

Of course, it’s Stewart Sheargold, so there are lots of good ideas; I especially enjoyed the duel between Benny and the Player near the end. (The rhyming dialogue is fantastic.) The concepts that aren’t metafictional are interesting. I like the idea of the different seasons being regions even if I don’t really know what it means. And it’s nice to hear from Adrian in the audios; he’s only been in three previous ones, and he’s often relegated to arguing with Jason. Here we see the best of Adrian — he’s tenacious and loyal — but also his fears and weaknesses. Harry Myers rises to the occasion and delivers his best performance so far.

The performances, indeed, are the strong point of the release. Probably realising that plot logic isn’t going to carry anyone through (the climax is disappointing storybabble), John Ainsworth assembled a strong cast. Lisa Bowerman delights as always (it’s actually in my contract that I have to say this in every Bernice review), and Robin Sebastian puts in a good turn as the Player, but I especially enjoyed Joyce Gibbs as the Spinster, a world-weary woman trying to keep the world running despite everything.

Also the sound design is great, even if it did take three people (Jane Elphinstone, Jim Mortimore, and David Darlington) to accomplish it. Evocative and immersive, especially the bits where Benny drops into the storybook. The effect on Gibbs’s voice makes the Spinster sound like Sil sometimes, though!

All in all, I was kinda frustrated with Professor Bernice Summerfield in the Masquerade of Death (not and the, despite what the rest of the internet, even the Big Finish website, claims). Some good ideas, some dull ones, but quite frankly, not enough for this listener to really grab onto and be carried through by.

Professor Bernice Summerfield in the Masquerade of Death (by Stewart Sheargold; starring Lisa Bowerman) was released by Big Finish Productions in March 2005.