The Scarifyers: The Magic Circle review 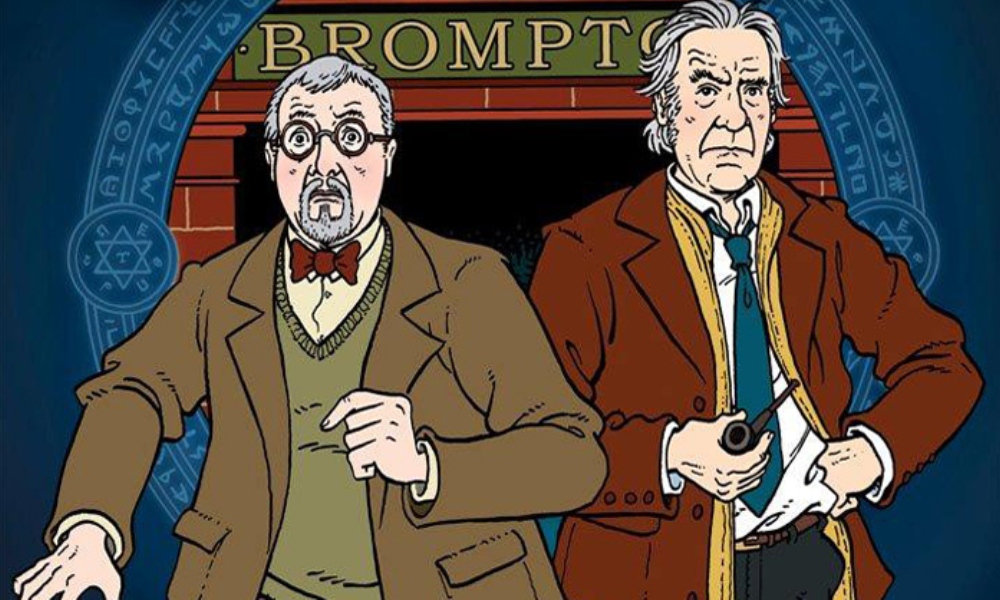 Since 2007, Nicholas “Brigadier” Courtney and Terry “Davros” Molloy have played Inspector Lionheart and Professor Dunning in the ongoing Scarifyers series of audio dramas. After the unfortunate death of Nicholas Courtney, it was thankfully decided to not end The Scarifyers, but to continue the series with a new lead: David Warner as Harry “Thumper” Crow, Lionheart’s old sergeant. The Magic Circle is the story tasked with making that transition.

Lionheart has suddenly gone missing, leaving poor Professor Dunning in all kinds of (literally) sticky situations without backup. Concerned, his investigations leads him to Harry Crow, and then on the trail of any number of magical acts. Meanwhile, an old woman named Iris Binns has begun chasing down these magical acts for her own reasons…

The plot is the usual Scarifyers nonsense, which is to say that it’s hugely enjoyable but you can’t really solve the mystery on your own. As always, it’s an excuse for hilarity and grossness at the same time, though my favourite scene was the one where Crow and Dunning commandeer a bus and are forced to keep its riders from revolting.

Wisely, without Courtney available to help make the transition, writers Simon Barnard and Paul Morris chose to make The Magic Circle all about Lionheart’s absence. The Magic Circle has the usual mix of humour and horror, right from the two hilarious opening sequences onwards (Dunning faces down the Girl Guides and a giant rat), but it also has a surprising level of emotion for a Scarifyers story. It quite ably plays on the listener’s affections for both Lionheart in particular and Courtney in general with a number of emotional moments, most notably the end of the first disc and the climax of the story. (The latter, especially, moved me far more than I’d’ve expected!)

Terry Molloy is as great as always as Dunning, communicating the poor man’s desperation as Lionheart continuously fails to appear. And David Warner’s Crow looks to be an able replacement for Lionheart, with a slightly drier demeanour and already a good repartee with Dunning. Not to mention to usually expansive cast of other characters, each with an accent more improbably than the last. My favourites were the ventriloquist and the two old ladies who befriend Iris.

Though it’s a tragedy that Nicholas Courtney left our world, it would have been a shame for The Scarifyers to end because of it. I’m glad that the series seems to be continuing as before, and I’ll happily pick up the next adventure of Crow and Dunning as long as Cosmic Hobo Productions continue to make them…