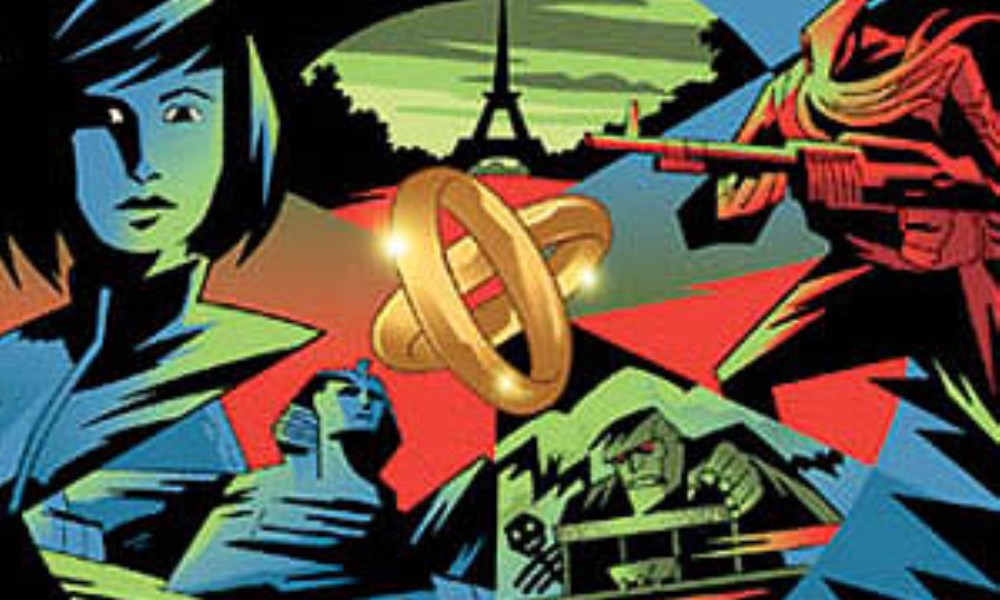 After the harrowing events of Life During Wartime and Death and the Daleks, it’s apparently time for some lighthearted events in the life of Bernice Summerfield. And so Jacqueline Rayner makes a welcome return to the range, having previously penned most of the (almost) uniformly excellent adaptations in the first season, not to mention the novels The Squire’s Crystal and The Mirror Effect. And even better, it brings back the Grel!

The Grel originally appeared in Paul Cornell’s New Adventures novel Oh No It Isn’t!, but truly obtained life in Rayner’s audio adaptation of that novel. They’ve been chronically underused since, though they are the only (I am pretty sure) monster to originate in a spin-off and make it into the parent series, having fought the Doctor and Charley in The Doomwood Curse. They’re simply a delight to listen to (so good choices for audio, then) as they travel the universe looking for facts. “Find facts! Find facts! Find facts!” It’s a nice change of pace to the run of four “monster stories” that preceded this one; we have a monster from Bernice’s own history, rather than an attempt to boost sales by pulling in something from the parent show.

Also, it’s a parody of the 1965 Doctor Who serial The Chase — the Grel are pursuing Bernice and company through time, much as the Daleks followed the TARDIS through time in that story. When the story opens, Grel from the future have locked onto Benny’s son Peter, wanting to acquire facts about this most unique being while he is still a child. Jason is trying to get Peter to use his and Benny’s time rings to visit a funfair or zoo or somewhere else in the twentieth century when this happens, and so Benny, Jason, Peter, Joseph the Porter, and Sophia the Grel (Peter’s godmother, previously seen in The Glass Prison) are launched through time, the Grel time machine right behind them.

Most of the story beats of The Grel Escape come straight out of The Chase: a deserted funfair, a comedy local at the top of a monument, an unconvincing robot double. Some of these work — my favourite part of the play was when Jason has to figure out which Bernice is the real one. I also enjoyed the brief lampooning of a scene from The Daleks’ Master Plan. It does feel a bit odd to be parodying a comedy story, though; if the point of The Grel Escape is to indicate that much of The Chase is ridiculous then… well, yes it is. I knew that already, and The Grel Escape doesn’t really provide any new aspects to my understanding. And some of the jokes fall flat, very flat, such as the funfair and Egypt sequences. But on the other hand, the Grel always made me smile, and kept the release as a whole on the right side of funny.

Where The Grel Escape slips the wrong way is with the characters. Though Bernice and Jason feel like their usual selves in general, the occasional wrong note is struck, especially at the beginning. After proving himself a hero in Life During Wartime and Death and the Daleks, Jason is back to being a layabout slacker. Plus there’s a joke about how he’s overweight, when both of those stories went to great pains to point out that he was rather fit now! Worse is Benny’s attitude toward Jason, untrusting and abrupt. I thought at first that The Grel Escape was going to explain this somehow, but that wasn’t the case; she was simply cruel for no good reason. Though it leads to a funny speech from Jason about how though Benny loves many people she certainly doesn’t like a lot of them, it doesn’t feel like Benny to me. The end of the play understands the two a bit better, though, as we get to see what Jason and Benny both fear about being parents as Peter absorbs the out-of-control power of the time rings.

Speaking of which, continuity quibbles: Braxiatel took the time rings away from Bernice and Jason in the short story The Collection in A Life of Surprises, which came out before this, so how does Jason have them here? To make things worse, they definitely weren’t on the Collection during Life During Wartime, where the only “time equipment” was Braxiatel’s disguised TARDIS, as we found out in Death and the Daleks. If the characters had had the time rings during those stories, they certainly would have used them. I guess Brax could have returned them after Death and the Daleks, but no-one mentions this. Also, they don’t seem to work the same way as they did during the original “time ring trilogy”. Both Walking to Babylon and Birthright indicate the time rings can move large numbers of people, but here, using them to carry four people plus Joseph threatens to burn them out. Also the sound effect used in those stories was better.

All right, I’m sorry, but these things bothered me the whole time. Will it make it up to you to say that in addition to the usual good performances from Lisa Bowerman, Stephen Fewell, and Steven Wickham, The Grel Escape features two good guest stars in Julia Houghton as Sophia the Grel and Daniel Hogarth as all the other ones. These two carried off the goofy Grel dialogue with skill — and Sophia was even a fully-fledged character!

GOOD FACT: The Grel Escape is fun and a nice change of pace.

BAD FACT: Its success is hampered by some subpar humour and characterisation.

CONCLUSION: The Grel Escape is worth your time.