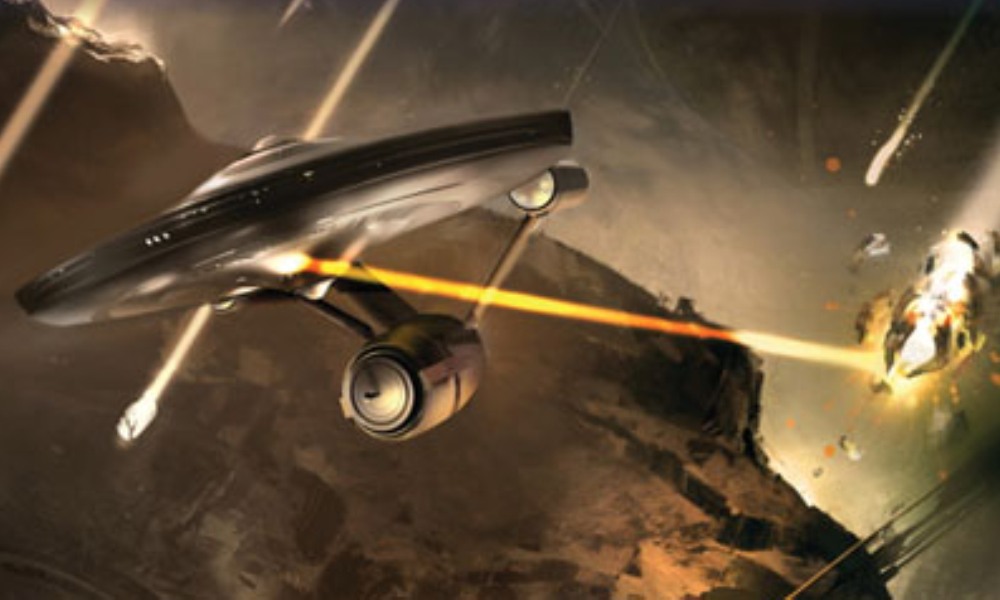 One of the story threads of the Star Trek: The Original Series novel The Rings of Time, written by Greg Cox, follows Earth’s first manned mission to Saturn in 2020, commandeered by Shaun Christopher. Despite the fact that the mission has been carefully planned out, nothing seems to happen as planned. From an unexpected stowaway named Zoe, over Saturn in a worse shape than expected, to finally encountering an alien probe, the crew of the Lewis & Clark seem to be in well over their heads. When Colonel Christopher decides to go on a space walk and investigate the probe, it suddenly powers up. Meanwhile in the twenty-third century, Captain Kirk and the Enterprise are ordered to a planet very similar to Saturn whose ring is coming apart and threatens the mining colony in the system. Unaware of the specifics of the Lewis and Clark‘s encounter with it, the Enterprise finds the same probe here and beams it on board to investigate with unexpected consequences.

The Rings of Time is one of those novels that is hard to review properly. On the one hand there’s little wrong with Greg Cox’s writing – the characterisations of the TOS core characters are very good and the crew (plus stowaway) dynamic on the Lewis & Clark is very engaging, for example – but on the other hand the story remains a bit flat. While it was interesting enough, there never came a point in the narrative where I was totally sucked into it and it didn’t really help that the solution of the novel felt too rushed, both regarding the solution of the Klondike mission and the body switch predicament. One of the reasons why the story wasn’t able to fully captivate me was probably that parts of it were rather predictable: the connection between the two female guest characters and the identity of the saboteur were two story developments that could be picked up some time before the reveal, for example. Another minor gripe I have with the novel is that, despite the good characterisations, the twenty-third century part of the novel is somewhat ordinary. But to balance the negative things I mentioned about the story so far I want to also point out some of the positives: Kirk’s struggle to pretend that he’s Colonel Shaun Christopher is written really well and overall the parts of the novel set in 2020 provide you with some very good storytelling.

As indicated earlier, the part that really helps the novel to stand out somewhat is the character work. Every one of the known TOS characters that is featured in a significant role feels totally right and one little scene I especially liked in that regard was an inner monologue by Spock on why he was proud of his part-human heritage. The character dynamic on the Lewis & Clark is probably the brightest point of the novel, both before and after Kirk joins in: the hostility between Zoe and Fontana, the tensions between Fontana and Christopher or Kirk dealing with his feelings for Zoe vs what he (doesn’t) know about Christopher’s life – everything is just written very believably.

Overall The Rings of Time probably won’t stand the test of time to become one of the all-time great TOS novels, but if you usually enjoy Greg Cox’s writing or just search for a nice TOS book to occupy you on a longer commute or flight this novel should be perfectly able to give you some hours of entertainment.

The Rings of Time (by Greg Cox) was released by Pocket Books in January 2012.