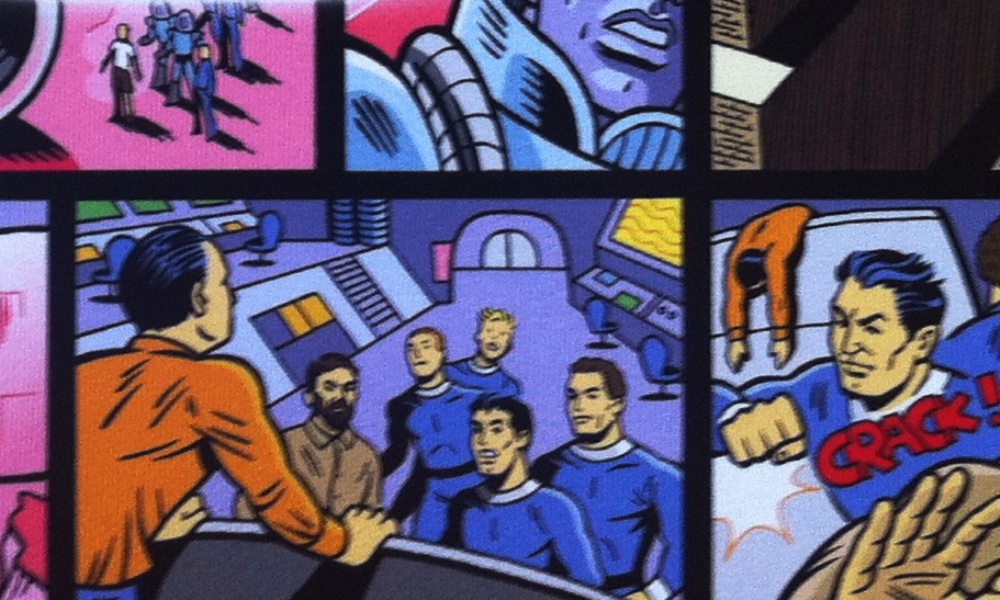 “Orders must be obeyed without question at all times.”

Until my editor asked me if I was interested in reviewing it, I had never heard of Journey into Space. But looking it up revealed that it was a BBC radio drama from 1953-58 about a group of people on, well, a journey into space. Well, I like vintage science-fiction, and I do need something to listen to while I do the dishes, and so I said yes, and soon a copy of the second Journey into Space storyline, The Red Planet, had fallen into my hands. It actually let me do quite a number of dishes, with 20 half-hour episodes stretched across ten CDs.

The Red Planet was written by Charles Chilton, and was broadcast 1954-55. It was a followup to the first Journey into Space story (Journey to the Moon, erased and later rerecorded as Operation Luna, which admittedly I haven’t heard), which had been hugely popular, and The Red Planet itself was also quite popular; Episode 19 was the last time a radio show in Britain achieved a higher audience share than its television opponent. In Journey to the Moon/Operation Luna, a crew of astronauts lands on the moon for the first time, while in The Red Planet these same astronauts set off on a mission to Mars.

I was impressed by The Red Planet’s attention to scientific detail. Though many elements are certainly fanciful, it pays attention far more than many comparable productions. Chilton is careful to observe the laws of motion in space — the fleet that heads for Mars fires its rockets at the beginning of the journey, flies along on intertia, flips over when making their final approach, and slows down again then. At one point, the fleet needs to avoid an obstacle, and a lot of planning is devoted to getting around this obstacle with minimal fuel use. Or, Chilton knows that it would be better to construct a Martian fleet on the moon than the Earth. It’s not always perfect — there’s a bit where one of the freighters in the fleet is hit by an asteroid, and it continues to coast along with the fleet, but surely some velocity should have been imparted to it by the collision — but it’s much better than I expected for mass-produced science-fiction.

The attention to detail is what makes much of the story, especially its early sections tense. I wasn’t sold right from the beginning, as there was a lot of talking between people about procedural stuff. It was interesting enough for someone like me, who likes it when space stories do all that “Fire rocket one”/“Rocket one firing” malarkey, but it wasn’t actually good drama. It picked up, though, when the Mars fleet began encountering obstacles in space. The listener has such a sense of the fleets’ limitations that the danger ratchets up considerably. Chilton’s writing and direction captures the fragility and isolation of space travel; as the fleet moves through what might be a cloud of asteroids, interference with their equipment means that nothing, not even the suit-to-suit radios work. Each character is isolated in his own little bubble, with barely any means of communicating with his fellows. Wow.

There are four main characters: Andrew Faulds plays Andrew “Jet” Morgan, the skipper of Discovery and the leader of the Martian expedition. Jet’s personality is basically “being the captain”; he’s not exactly wracked with self-doubt or uncertainty. (He does have a tendency to forget things, especially early on, probably so that they can be reexplained for the benefit of listeners who forget what happened last week.) There’s also Bruce Beeby as Stephen “Mitch” Mitchell, whose personality is “Australian”. This basically means that he’s hot-headed.

It’s the other two characters that particularly stuck out for me. Guy Kingsley Poynter plays “Doc” Matthews, who is ostensibly an expert in space medicine, but like most people with advanced degrees in science-fiction, is pretty much capable of knowing anything the plot requires him to know. Doc also narrates Journey into Space, and his steady, calm presence centers the episodes. And best of all is David Kossoff as Lemuel “Lemmy” Barnett, the cockney radio operator who might not know his space science, but is never afraid to ask a question. Lemmy keeps the action from being too staid, with humour, constant indignation, and fear, though he’s never cowardly and often outwits the other characters.

The characters are more than the sum of their parts; they’re that type of four-man team that works so well in performed drama, like the SG-1 team on Stargate. I particularly liked the interactions between Lemmy and Doc, as Doc probably takes Lemmy the most seriously of any character, and Lemmy obviously admires Doc’s knowledge. The four are a good unit, and I challenge you to spend ten hours with them and not become pretty attached to them.

This being a small radio production, there’s a limited range of other voices. Most notably, Anthony Marriott puts in a chilling performance as the strange astronaut Whitaker, and David Jacobs fills in the gap as pretty much every other character in the entire story. There’s an early scene where he plays three different reporters interviewing Jet, and it’s pretty obvious they’re all played by the same guy, but he can do enough accents that it’s never too obvious, though by the end he’s plainly run out of accents.

The sound design (by Brian Willey and Joe Young) and music (by Van Phillips) are both excellent. When the sound design, direction, and music all come together, the results can be quite astonishing: the cliffhanger at the end of Episode Eight, for example, as Discovery attempts to land on Mars, had me on the edge of my seat as much as anything in a modern Big Finish audio drama, if not moreso. There are also some surreal dream sequences that grabbed me pretty neatly. It’s especially impressive when you remember that the music and sound effects were played back live during recording.

It starts with some pretty mundane happenings, but as it unfolds, The Red Planet reveals that what’s going on is far bigger than any of the crewmembers of Discovery realises. What begins slowly builds up a lot of momentum as it goes on; near the end, I kept on volunteering to do the dishes so I’d have an excuse to listen to another part! I’m delighted to have come across the story, and I’ll certainly be checking out further adventures of Jet, Mitch, Doc, and Lemmy as they journey into space.

(There’s even some extras. There’s a short interview with Charles Chilton, which reveals some interesting facts, especially about the working methods of the 1950s BBC, though the interviewer asks some dumb questions, such as could they have done it like Orson Welles’s The War of the Worlds. Uh… no. There’s also a very nice 16-page booklet prepared by the incomparable Andrew Pixley… though it’s only a PDF and not an actually booklet. A travesty! Such a work demands to be seen.)