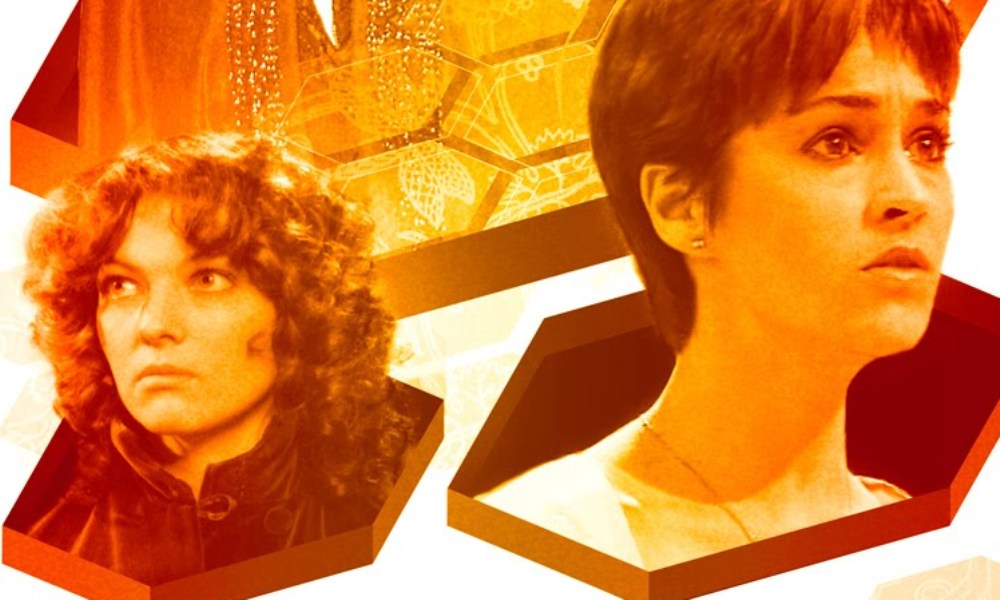 Hexagora is the second of the Lost Stories to feature the Fifth Doctor, Nyssa, and Tegan, following straight on from The Elite in a way that feels nicely authentic to the 1980s. The original outline for Hexagora was written by Peter Ling and Hazel Adair (Ling was the writer of The Mind Robber back in the 1960s), and it was adapted to audio by Paul Finch (who’s penned a few Big Finish stories the past couple years, includinga Sixth Doctor Lost Story, Leviathan). Vacationing in Australia, Tegan alerts the Doctor to the fact that a guy she knew at school has gone missing… and of course the Doctor determines that he’s been abducted to another planet. But when the TARDIS arrives on Proxima Centauri, they find not an advanced civilisation, but a recreation of Elizabethan London.

Hexagora starts off roughly, with a hoary scene where Mike Bretherton talks to his editor on the phone in a distracting accent when he sees a meteor, then a couple scenes where the Doctor, Tegan, and Nyssa work to track Mike down that are high on technogubbins and low on energy. But once the plot makes it to Luparis, it picks up in energy. At first, I was worried because Hexagora seemed to do that thing that bad Doctor Who stories do — jam together a number of disparate elements in the hope that it creates something interesting — with Elizabethan London, Proxima Centauri, alien insects, and court politics, but in fact as the story unfolds, we see that all of these elements go together quite nicely.

Curiously, though, all of the regulars feel underutilised, even though they all get their moments. The Doctor’s relationship with Queen Zafira (excellently played by Jacqueline Pearce of Blake’s 7 fame) has some good bits, but he spends a lot of time wandering around being told the plot. Curiously, both Tegan and Nyssa get romantic moments, but neither relationship is very developed. Tegan’s is hampered by being opposite Hadoke’s Bretherton voice, while Nyssa’s just doesn’t get time. And their roles are counterbalanced by their seeming random decisions to escape and return to Zafira’s castle.

I appreciate that the plot resolution to this story isn’t about conflict or winning, but the Doctor finding something that works for all parties. Unfortunately, the solution that the Doctor comes up with doesn’t entirely convince, as there doesn’t seem to be a reason the characters wouldn’t have thought of it before he arrives. Still, the Hexagora themselves and their modus operandi are a very neat idea, and there are some nice moments, especially that Part Three cliffhanger and the coda with Pearce’s character at the end of Part Four.

Performance-wise, I’d like to single out Sean Brosnan, whose Astorius is a nicely-portrayed sympathetic scientist. I was a little disappointed in Simon Robinson’s music — it felt more like Keff McCulloch than Paddy Kingsland — but otherwise this is a nice-sounding production. (Also, Toby Hadoke is very funny on the CD Extras; too bad he doesn’t get a chance to be so in the production.)

In the CD Extras, Janet Fielding and Sarah Sutton remark that Hexagora feels very of its time in a way that many Big Finish stories don’t. And I think they’re right; in its depiction of the characters and action, Hexagora actually feels a little bit more accurate to its time than The Elite did. But that’s more due to a lack of energy, and slightly flat characterisation for Tegan and Nyssa — here, accuracy has not been a virtue. Hexagora isn’t bad, but like some of the stories from the first season of Lost Stories (Paradise 5, Point of Entry), it verges a little bit too close to dull at times.