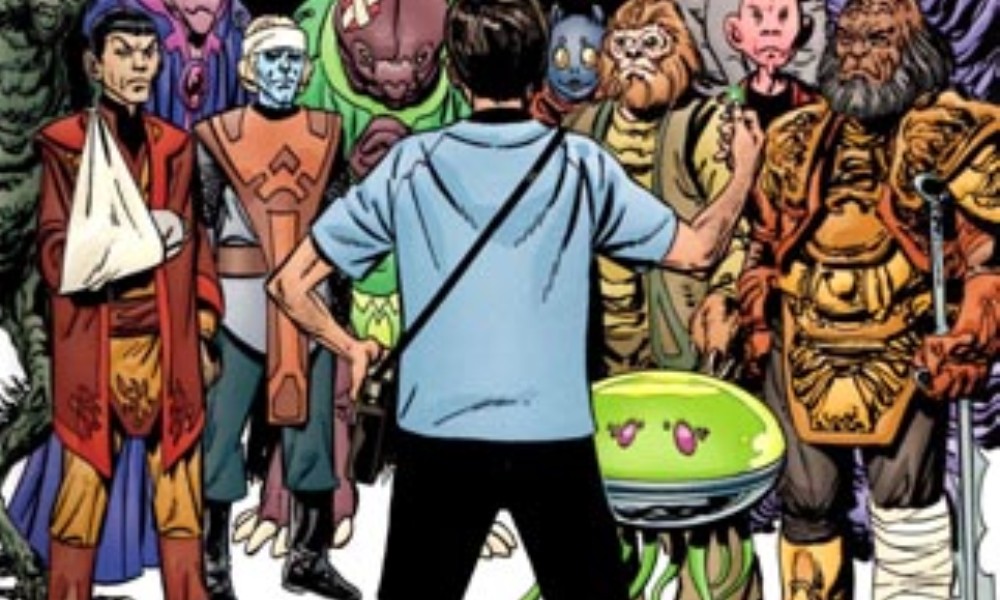 Leonard McCoy, Frontier Doctor is the trade paperback collection of a four-part Star Trek comic miniseries written and illustrated by comic legend John Byrne, and coloured by Lovern Kindzierski. In it, we follow McCoy during his time outside Starfleet, working for the Federation on the outer fringes of their territory, leading up to the first movie. The trade paperback features five stories dealing with a variety of problems, both medical and ethical, for Leonard McCoy to solve. On his journeys he meets several old friends and acquaintances from his past while keeping James T. Kirk, one of his oldest friends, abreast of his adventures in good old country doctor fashion, via hand-written mails.

Let me preface this review by saying that it is based on McCoy, the German release of the paperback, published by Cross Cult in October 2011. That will especially come into play when I’ll talk about the bonus material later on, since there are differences to the US release. Before I come to that and before I talk about the stories themselves, though, let’s talk about the art. After reading two comic trades with very bad artwork (Countdown and DS9: Fool’s Gold) it was refreshing to read one with rather strong art again. The known characters are captured very well; ironically enough, the only character who seems to be a bit off in some panels is McCoy, but those panels are few and far between, so that is doesn’t really hurt the good impression. The original characters, both human and alien, are also drawn very well and are very distinctive, even characters who are more or less only bystanders. Between the different issues Byrne and Kindzierski mix up the “lighting” of the stories, so that it conveys the “mood” of the stories very well.

The crises Dr. McCoy faces range from the ecologically-based, over technologically-based, to moral dilemmas, and it’s a good thing that Byrne has mixed up the settings and premises for the different stories. It would have been all too easy to just bank on the nostalgia factor of seeing McCoy again with little to no variations between the different stories, but – as with the colouring – Byrne made sure to give each of the plots a distinctive feel. It starts of with Weeds, which probably is the most traditional medical crisis in the paperback, and as such functions well as the “greeter” into McCoy’s adventures, as it shows McCoy doing what he does best. Next up is Error, in which McCoy has to deal with what appears to be a medical crisis, but ultimately turns out to be selfmade problem by the featured aliens, who by the way get extremely creepy after a while due to their constant “smile”. That little thing actually adds a lot to some of the scenes – especially the final panels, where the “smile” stands in total contrast to the spoken words. Medics, the next story, is despite its name one of the two stories that pretty much have no actual medical stuff in it, and it’s also the story I enjoyed the least in this trade paperback. That’s because of two reasons: first, there is a overkill of guest stars from Byrne’s other Trek comics (in case you’re wondering: no, it’s not really necessary to read those, as I haven’t done that and had no problem to follow the story) and secondly the story is pretty unimaginative and by-the-numbers. The final two stories, Hosts and Scalpel, are shorter, as those two were collected in a single comic issue, and are quite different. While Hosts is a nice little medical story teaming up McCoy and Chapel, Scalpel is more of a moral dilemma for McCoy and a nice flashback/reference to City on the Edge of Forever. All of the stories, maybe with the exception of Medics, transport you back to the TOS era and wouldn’t feel out of place as McCoy-centric TOS episodes.

As mentioned above Cross Cult’s German version came with some extra stuff: beside the cover gallery of all the different cover versions, which I think is in the US version too, there’s an additional six-page biographical essay about John Byrne and a two-page piece highlighting the references to TOS episodes inside the stories. I really appreciated the essay, since I’m a comic novice and it’s nice to learn more about the man behind the comic I just read and the other piece is nice as well I guess, although there was nothing in it I hadn’t caught myself.

Overall, a much needed light of hope after my two most recent Star Trek comic experiences, and definitely worth a look for every McCoy and/or TOS fan.

Leonard McCoy, Frontier Doctor (by John Byrne) was released by IDW in October 2010.