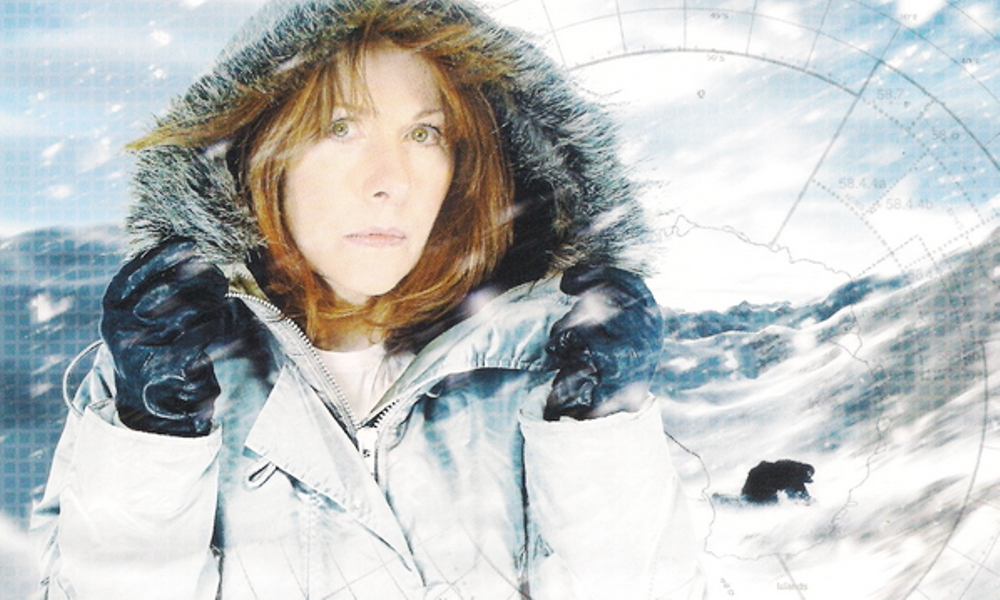 The second instalment in Sarah Jane Smith’s second season takes Sarah and Josh to Antarctica to see how a scientific research installation that Sarah is funding with her aunt’s money is getting on. Not to mention that that’s where Will Sullivan works — and Josh thinks he may have reason to be jealous of the other man. But of course David Bishop’s Snow Blind leads to more complications than that, as when they arrive at the base, tensions are rising…

Snow Blind aims for a tense, confined atmosphere in the snows of the Antarctic, and it mostly succeeds in this regard. The visual imagery — from Lee Binding’s beautiful cover onwards — conjured by the play is fantastic. There are a couple points where one wishes that the sound design and direction could be a little bit more tense, and that the script could create a little bit more of that feeling of isolation, but overall it works.

If there’s any disappointment, it’s that Sarah Jane’s investigative skills are once more not on display. Having realised that something is up on the base, Sarah still follows an anonymous note to a meeting alone, and then does not solve the base’s mystery herself — the perpetrator is revealed to her by circumstances. On the other hand, Sarah acquits herself well, demonstrating her usual level of stubbornness and cleverness in extracting herself from some truly awful situations. Kudos to her — and to both Elisabeth Sladen and David Bishop in making it work.

Sladen is, as she always was, wonderful, and Jeremy James is also enjoyable as Josh. Tom Chadbon continues to delight as Will, bringing to the role an easy dignity and an easy comfort with Sarah. The only real misstep here is the interaction between Will and Josh; it begins as schoolboy bickering, which is all right, but it never moves beyond that. It would have been nice had Snow Blind given their relationship some growth, especially given the revelations that come at the end of this play and during the next one, which could have been heightened. The rest of the cast is fine, with especial plaudits due Nicholas Briggs as the base’s disintegrating commander, Munro.

Of course, Snow Blind just doesn’t stand alone, but ties into the ongoing metaplot of the second season. There are a couple false leads set up, and the tie-in ultimately seems to lead to another whopping coincidence, as in Buried Secrets. I’m also not too keen on the idea of Sarah Jane as the messiah-figure of a doomsday cult; it’s a rather arbitrary way to involve her in adventures that seems to have little to do with Sarah herself. It could just as soon as have been anyone at the heart of the cult.

As for the revelations at the end of the story… I’ll reserve judgment. Snow Blind is a decent thriller on its own, but it’s obviously also setting up for something big in the future, and how that goes will determine some of what I think about Snow Blind.