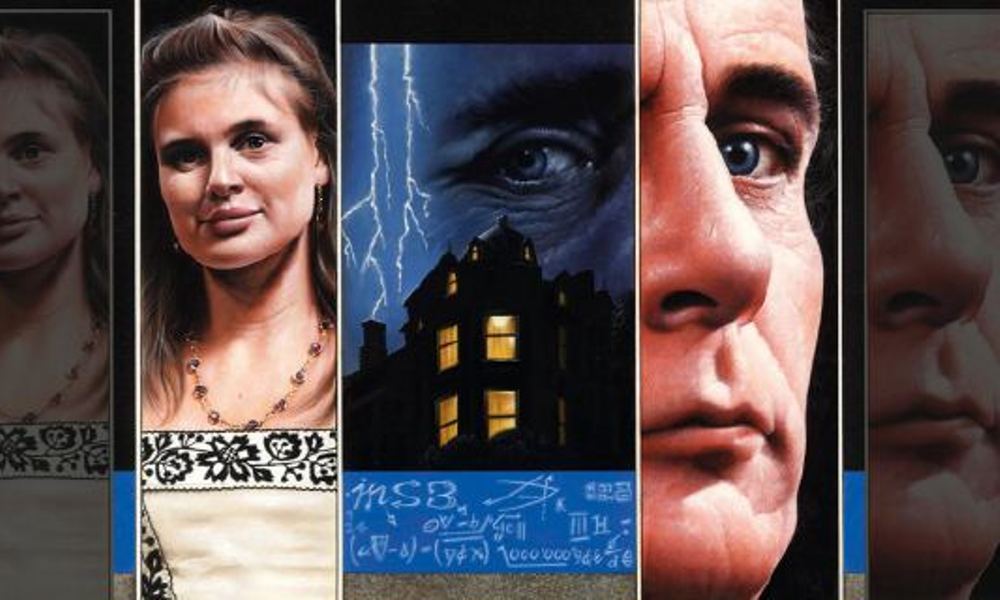 Ghost Light is the most recent release in AudioGO’s series of adaptations of Doctor Who Target novels — which were of course in turn adaptations of televised serials. In this process, Marc Platt’s Ghost Light has gone from 75 minutes to an astounding 411. It’s read by Ian Hogg, who in the original serial played the primary villain, Josiah Samuel Smith. Ghost Light is famous for being baffling, but I remember it as one of my favourite stories of the classic series, but because it’s been some seven-ish years since I last saw it, I won’t be comparing the reading to the television version, but attempting to review it on its own terms.

“Everything has its place, Ace,” the Doctor tells his companion at the conclusion of this novel, seemingly contradicting its previous seven hours. Claiming that Ghost Light would fit comfortably alongside modern literary takes on our Victorian heritage like A.S. Byatt’s Angels & Insects would be a profound exaggeration, but like Byatt, Platt looks at the class structure and scientific revolutions of the Victorian period in a way that indicate their resonance with our own time — and thanks to time travel he has a much more direct venue for the comparison!

Ghost Light combines the notions of class structure and evolution to use the one to critique the other. Ace, upon arriving in the Victorian mansion of Gabriel Chase, spends much of the story chafing at various characters’ attempts to force her to conform to societal values, most directly shown when it is insisted that she wear a dress and go by “Alice.” But such rigid classification is unsustainable, the story shows, because everything is always changing and evolving. The character of the Reverend Ernest Matthews is prominent in the early stages of the novel, and his belief in a firm order to the social world is directly linked to his belief in the unchanging state of the natural one. The idea of evolution, then, represented by Charles Darwin and Josiah Smith, threatens to overturn everything he understands. The climax of Ghost Light sees the Doctor explaining evolution to a deranged alien known as Light.

Light cannot understand how change can be a constant — the only constant — but accepting that lies at the heart of this story. The characters who survive are those who adapt and evolve. Even Josiah makes it through to the end in a vastly changed state. This is what makes the Doctor’s statement at the end that everything has its place initially seem odd, but on reflection, it fits. Ghost Light never goes so far as to suggest that everyone can fit into any place, but rather that everyone has a place they must find for themselves. Everyone has to adapt. Ace deals with the strictures of Victorian clothing not be eschewing them entirely, but by twisting them to her own needs: she wears the dress of a Victorian gentleman, not a lady. But even Ace ultimately wears an evening gown when the situation requires it. (No corset, though.)

The relationship between Ace and the Doctor is the high point of this novel. There’s an early misstep, I think, where the Doctor internally complains that he’s missed a chance to pedantically lecture Ace, but the novel soon recovers from this, showing the Doctor’s genuine care and concern for Ace’s growth and development. No-one can deny that the way he drops her into this story is a little cruel, but the way she makes out at the end works really well — I loved the closing lines of the story, and they showcase the Doctor/Ace relationship perfectly. There’s a nice bit of internal reflection where Ace contemplates that the crew of the stone spaceship at the novel’s end is a bit weird… but that her and the Doctor being together is no less weird, yet it’s clearly their place. The two have adapted to one another.

The themes don’t always work themselves out quite so easily. Why we’re supposed to hate Ernest Matthews and Light is pretty clear, as each is ultimately an expression of dangerous hierarchy. But Josiah Smith, an ardent evolutionist, turns out to be just as evil as the two of them, but it’s not really clear why, when we are sympathetic to his scientific beliefs. It feels off to me, but maybe I shouldn’t expect the correspondence between belief and virtue to break down quite so cleanly — after all, one of the most admirable characters in the book is the Neanderthal manservant Nimrod, and his belief in a universal hierarchy is absolute.

After an excellent prologue, Ghost Light gets off to a shaky start, moving a little bit too slowly. A lot of strange things happen, but not in a way that drives the story forward. Worse, our protagonists remain unaware of the weird goings-on for far too long, either because they’re happening elsewhere or because they just aren’t noticing things that happen right next to them. The latter trick might work on television, but it’s clunky in prose, especially when one chapter ends with the animals in the house all coming to life… and the next begins with that seemingly not having happened. The story finally gains momentum, though, when Ace is shoved into the elevator by the malevolent housemaid, journeying underground to discover what secrets lie beneath Gabriel Chase. From there on, the story moves, speeding up and slowing down in turn to drive up the tension.

Ian Hogg’s reading is good, though there were some aspects to his cadence that became a little grating. He never imitates actors, but he gives each character a distinctive voice; I was particularly impressed with his Ace, who immediately recalled the character. He even adapts his narrative voice to suit the viewpoint characters; Doctor scenes have a slightly different tone than Ace ones. The sound effects are all right — the tinny musical sting that was repeated at a lot of scene breaks detracted from the atmosphere rather than add to it, but there were times when the story got it just right, such as the Doctor’s piano performance for Ernest, or the ominous rattling of the elevator as it descended into the depths. Ace’s encounter with the light seeping through the membrane underground was particularly exceptional.

According to Elaine Hadley’s Melodramatic Tactics, “The Victorian novel… is both an instrument and a product as well as, less regularly, a critic of class society”, and Ghost Light is truly Victorian in this sense. It seeks to interrogate the values that underlie our own society by critiquing those of the past — and it finds them all wanting. Ghost Light might have some problems, as both a novel and a reading, but it’s an imaginative, thoughtful story worth spending more than 75 minutes with. Though maybe not quite 411.

Ghost Light (by Marc Platt; read by Ian Hogg) was released by AudioGO in June 2011.