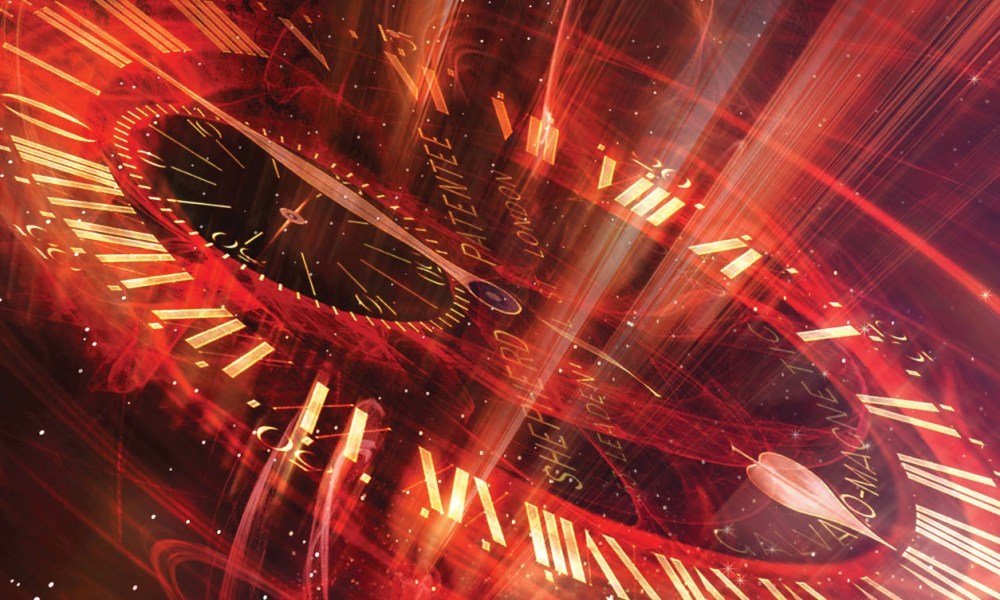 In Watching the Clock, a Star Trek novel released under the Department of Temporal Investigations banner, Christopher L. Bennett follows the agents of said Federation department doing their job. When more and more time travel-related events happen in the twenty-fourth century, the agents Luscly and Dulmur of the DTI begin to fear that a new battlefield in the Temporal Cold War has been opened right in their backyard. Is that really what’s happening or are those all just coincidences? At the same time, freshman agent Teresa Garcia is sent on a mission with her mentor and crush Agent Meyo Ranjea: will she be able to concentrate on the case at hand or will her attraction to her partner be her downfall?

To be perfectly honest, I went into this with pretty low expectations. While Christopher L. Bennett’s earlier works were really great in my opinion, my estimations of his more recent works were less stellar. Add to that that Watching the Clock‘s premise catered to what I think is Bennett’s greatest weakness, his tendency to sacrifice the flow of the story on the altar of science, and you can see where I’m coming from. But while all the temporal physics talk really was a bit too much for my taste, it wasn’t quite as bad as I feared, and my biggest problem with the novel is actually a different one: most of the novel felt to unconnected for me. There’s a lot of real good character building and some nice episodes, but a good chunk of the novel feels like set-up to introduce the characters. Only later in the novel the plot begins to thicken and the story picks up some steam, but for my taste that happens a tad too late, so that the final resolution, especially the revelation of Future Guy, feels rushed.

Which is kind of a shame, since the dynamics between the different agencies and factions actually makes for an interesting story, with the two DTI agents as the somewhat dull centre of the storm so to speak. I won’t hold it against the author that Future Guy in the end is more or less an unknown as far as the reader is concerned, as this is a direct result of the fact that our protagonists aren’t time-travelling themselves and since we’re following them we can’t know more than them. The final twist in the end is nice, but somehow I have a feeling that it ultimately will be nothing more than a side story, even if DTI is picked up as a (semi-)regular series.

As mentioned above Watching the Clock features some neat character work and that is pretty much the main factor in raising the rating into the high sixties, meaning pretty decent, instead of a truly mediocre high fifties/low sixties one. Let’s face it, Dulmur and Luscly are dull characters, and most of the time Christopher L. Bennett doesn’t try to convince you otherwise, but instead adds a back-story to contextualise their dullness. While there are some cringeworthy scenes between Garcia and Ranjea their team-up is handled well for the most part, too, as are the characterisations for most of the other characters, with one very notable exception: I absolutely hated how the character of Clare Raymond was portrayed in this novel, besides being used to show how much humanity has evolved since her/our time. Looking at the way she acted here I can’t really see how the DTI could think she’s a good counsellor, as she basically seems too whiny and self-absorbed to really be of any help for her patients in my opinion.

Overall a surprisingly (for me) decent novel, which actually was pretty fun to read for the most part. If Bennett had cut down a bit with the science stuff and had shifted into a higher gear earlier in the novel Watching the Clock could have been coming pretty close to the quality of his earlier works like Ex Machina or Orion’s Hounds. As it is, Watching the Clock should be a fest for people who are more into Christopher L. Bennett’s devotion to science, but even those like me who are more into it for the story and characters should find enough to like about the novel to enjoy it.

Watching the Clock (by Christopher L. Bennett) was released by Pocket Books in May 2011.