The Scarifyers: The Secret Weapon of Doom review 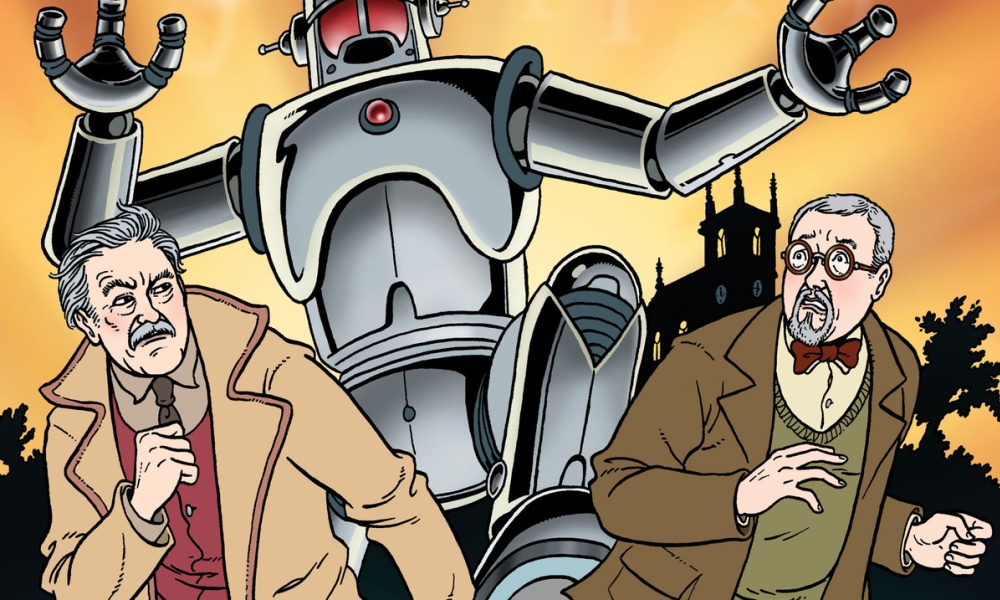 The Secret Weapon of Doom is the fifth instalment of The Scarifyers, the audio drama series about MI-13 protecting 1930s Britain from supernatural threat, starring Nicholas Courtney as Inspector Lionheart, ex-policeman, and Terry Molloy as Professor Dunning, writer of horror fiction. In this adventure, with Dunning injured in a car accident, Lionheart has been assigned a new partner, Victor Bright, played by Nigel Havers, as they try to find a weapon so secret that no-one knows what it looks like or even what is does. (I think Nigel Havers is famous, but I only know him from the excellent Doctor Who play No More Lies from Big Finish.) Meanwhile, Dunning and the other member of his writer’s group, the Fantasists, are trying to write a group novel, but being stymied by the repeated deaths of their members.

Every adventure of The Scarifyers is good fun, and this one is no exception. It is perhaps not as funny as its immediate predecessor, The Curse of the Black Comet, but given that it contains 100% less BRIAN BLESSED, there was probably no way around that. It still manages to contain the worst jailbreak of all time, the best escape plan ever concocted, poison soup, a man afraid of wasps, a woman throwing potatoes, an authentic Middle-earth funeral, a duck-based explosive device, and Nigel Havers deducing Lionheart’s occupation by the size of his waistband.

My favourite recurring joke is probably the membership of the Fantasists, who are a sort-of Inkling parody, down to the guy who writes fantasy epics supported with tedious amounts of detail… and a son named Christopher who intends to profit by publishing all his unpublished manuscripts. But there’s also an H.G. Wells knockoff writing about “Plutonian war-machines” and a bequest with some very specific requirements.

Though Dunning does fine in his own plotline, separating him from Lionheart does a disservice to the latter character. Nigel Havers does an excellent job as Victor Bright (so good, in fact, that I would have gladly seen him become the new series lead after the lamented passing of Nicholas Courtney, though apparently that’s not to be), but I don’t get what his purpose is beyond to fill Dunning’s role in the plot. He and Lionheart get along fine, neither spectacularly nor terribly, and so his presence reveals nothing new about Lionheart, and there’s also less comedy than there’d be if the two were hanging out together. That said, Courtney’s last turn as Lionheart sees him going out on a high note, with the scene where he’s interrogated by a hospital matron garnering one of the biggest laughs of the play.

Simon Barnard and Paul Morris’s plot is a little obvious at times — which is unusual, given the very convoluted plots of Scarifyers stories like The Nazad Conspiracy and The Curse of the Black Comet — and slow to develop, so the first disc didn’t work as well as it might have, but once the characters figured out what was going on, the whole thing picked up considerably. The climax is both epic and farcical, just the way a story like this should be.

In addition to Courtney, Molloy, and Havers, The Secret Weapon of Doom also features Leslie Phillips as Colonel Black, who I think is famous too, and does a good job. And like all Scarifyers stories it features David Benson (also known as Iris Wildthyme’s friend Panda) as a billion different characters, all of them with comedy voices. Alex Lowe and Lizzie Roper play an alarming number of parts, too, the latter seemingly taking on every female in the whole piece. The sheer density of voices can get confusing, but if you just relax and roll with it, it’s usually all right. (On a somewhat related tangent, I do miss some David Benson’s Aleister Crowley, established as a recurring character early on, but not seen since. Bring him back!)

There’s a good laugh at the end, of course, and the whole thing is good fun, thankfully forestalling any bittersweetness that could come from realising that this is one of Nicholas Courtney’s last-ever performances. Though I’ll miss him and I’ll miss Lionheart, I’m thankful the series will be continuing regardless — I can’t stomach the idea of foregoing my annual dose of The Scarifyers.