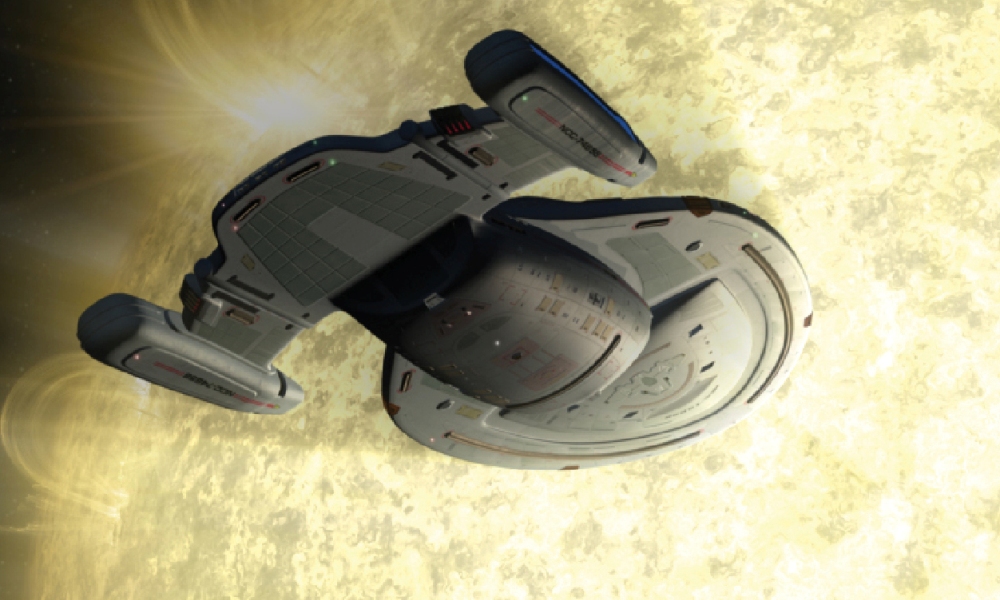 Children of the Storm, the third of Kirsten Beyer‘s post-Christie Golden Star Trek: Voyager relaunch novels, shifts the focus to some of the other ships of the Delta Quadrant fleet. In the Destiny books, the eponymous Children of the Storm told Captain Dax of the Aventine in no uncertain terms that they wish to be left alone, and yet Starfleet has sent the Voyager fleet to seek them out; three of the nine ships – the U.S.S. Planck, U.S.S. Demeter, and U.S.S. Quirinal – set course for the Children’s space. At first, everything appears to be quiet, but during a transfer of food between the Planck and the Demeter the Children attack, destroying the Planck and taking the Demeter into custody. Will the crews of Quirinal and Demeter be able to free themselves and stay alive until help arrives?

While Kirsten Beyer’s two previous novels already were huge improvements for the Voyager relaunch line after Christie Golden’s run, for me Children of the Storm is the high point of the series so far. Everything comes together nicely: mostly strong characterisations, an interesting story and, most importantly, a refreshing resolution to the problem at hand. The plot was pretty much divided into three separate settings; the main ones on the Demeter and Quirinal, and on Voyager, where some character-driven side plots take place.

I know Voyager purists might disagree, but I liked that the Voyager crew was mostly relegated to the side plots in this one, and we saw more from another part of the fleet. Kirsten Beyer was very successful in moving the Voyager crew’s individual tales along while actually giving the Demeter and Quirinal‘s crews a chance to capture the spotlight. The story jumps around a lot, both in terms of places and time, but it never loses the reader in the process. For me the best parts of the novel were those set on the Demeter with Captain O’Donnell and his XO Atlee Fife. It’s kind of a strange set up between the two, with O’Donnell seemingly just there because of his scientific background and Fife being the actual Captain in all but title, but over the course of the novel a really interesting narrative evolves out of the differences between the two. Both characterisations are probably a tad over-the-top at points, but that actually helps to create the right mood. As mentioned about, the resolution of the Demeter‘s dilemma was really refreshing, depending more on the power of creation instead of destruction and it was even more effective because of the counter-point Fife provided. The Quirinal parts of the novel pretty much deliver the more action-filled scenes, and give us a good glimpse on a potentially very intersting crew, too. Captain Farkas for one made a good impression and definitely should be a good addition to the Voyager cast.

If the novel has any weaknesses it probably lies with the leaders on Voyager, but even those quibbles are only minor. It just kind of stood out negatively to me, in contrast to the otherwise very strong characterisations, that Chakotay and Eden were portrayed a bit inconsistently when dealing with one another. I can’t really pinpoint it, but it just felt like Kirsten Beyer wasn’t 100% sure where to go with their professional relationship at times. But as I said those things were pretty minor, almost bordering on nitpicking in contrast to all the good she did for all the other characters, both “old” and “new”; even Neelix was almost tolerable, although I do hope he won’t be a permanent fixture in the series.

Overall The Children of the Storm proves that it is perfectly possible to write very good Voyager fiction without a living Janeway, who very much is a part of the series nonetheless due to how she influenced the people around her, if that makes any sense. If someone had told me a few years ago that Voyager would be one of the series I look forward to the most when it comes to new releases, I would have pointed at them and laughed, but here I am waiting for Beyer’s next novel.

Children of the Storm (by Kirsten Beyer) was released by Pocket Books in June 2011.