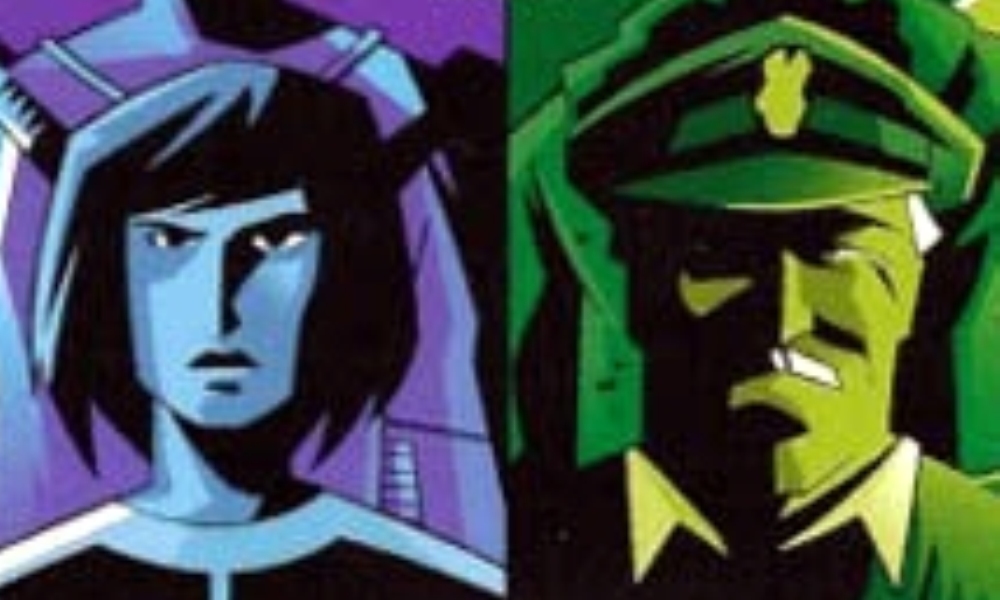 Back in December 2004, Big Finish Productions and Doctor Who Magazine collaborated on yet another free audio CD. Unlike previous adventures such as Last of the Titans, The Ratings War, and Living Legend, it was not a Doctor Who story. Rather, it was intended to draw listeners to two of Big Finish’s ongoing Doctor Who spin-off ranges via the use of Doctor Who monsters in two half-hour adventures.

The first of these is The Coup by Simon Guerrier. It’s written as a prequel to the UNIT series, and it sets up several of the characters and situations to appear in those stories, especially Nicholas Courtney as Sir Alistair Gordon Lethbridge-Stewart. The good old Brigadier is speaking at the ceremony where responsibility for “weird threats” in the United Kingdom is being transferred from UNIT to an organisation called ICIS. Only last night, a group of Silurians attacked Tower Bridge, and who knows what they’ll do at the handover…

With only half an hour and eight actors, The Coup doesn’t have much of a plot. There’s basically two stories: a reporter named Francis Currie is captured at Tower Bridge and illegally held by ICIS, and UNIT must protect the Brigadier at the handover. There’s basically only one significant action in each, and in the Brigadier’s plot we don’t even get to see the pivotal moment of decision, though what the Brigadier does during the handover itself is nicely done. There isn’t time for any repercussions, but I suppose that’s the point; maybe someday I’ll buy the UNIT series.

None of the other performers really distinguish themselves either way, seeing as they’re all stock types: good military officer, crusading reporter, evil intelligence agent. And that’s about it. Colonel Brimmicombe-Wood is mentioned a couple times. If you’ve heard Doctor Who Unbound: Sympathy for the Devil, you’ll know that he’s played by future Doctor David Tennant, but he’s not in this one; Colonel Emily Chaudhry (played by Siri O’Neal) fills in for him.

The other story here is Silver Living by Colin Brake. It’s in the Professor Bernice Summerfield line, falling at the end of the fifth series, and it’s got two actors but three characters: Lisa Bowerman as Bernice Summerfield, Nicholas Briggs as Lynton Jellis, and Nicholas Briggs as the Cyberman. Benny is called to Tysir IV to help investigate a mysterious tomb, and who should that tomb belong to but a race of sleeping silver giants…

There’s two distinct halves to Silver Living. In the first, Benny and Lynton must break into the tomb. Given the short running time, this is too easy; the tomb here makes the one in Tomb of the Cybermen look well-protected. As in that one, it’s all a trap, but it’s hard to believe that Benny is the only person who could have solved it given how simple it turns out to be.

The second has a lot of promise — Benny working alongside a Cyberman so they can both escape — but again the short time shoots the story in the foot. It would have worked better had there been more of a relationship between the two. Nothing about this story is bad, but like so many in the Bernice Summerfield series, it’s a little too lightweight. But you can’t help feeling that if it had had a full hour, that wouldn’t have been an issue.

Lisa Bowerman and Nicholas Briggs are both perfect at what they do, of course. Briggs’s character of Lynton isn’t great, but that’s because he’s the exact same as Keelor in The Greatest Shop in the Galaxy: a corporate stooge who’s a big fan of Benny but makes unwanted sexual advances and turns out to have a secret agenda. It wasn’t a particularly great idea the first time…

Both The Coup and Silver Lining are nice little pieces, though given their limited time, neither really grabs enough to attract a newcomer to either range, I don’t think. They’re more treats for already established long-time Big Finish listeners.

Bernice SummerfieldDoctor Who
by Steve Mollmann
Leave a comment