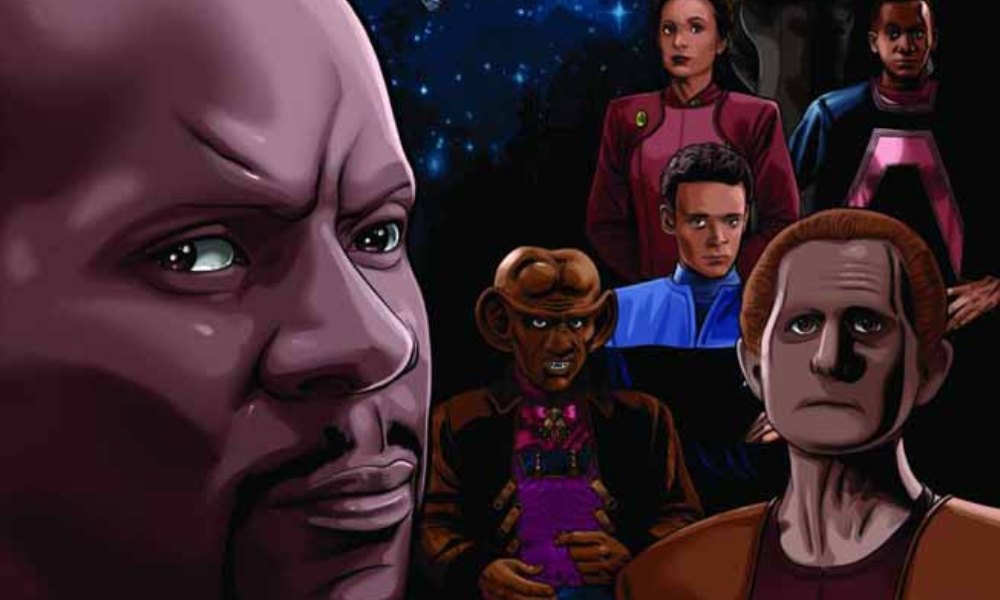 Fool’s Gold is a trade paperback collection of a Star Trek: Deep Space Nine comic miniseries written by Scott and David Tipton with art by Fabio Mantovani (Issues 1-3), Emanuela Lupacchino and Francesco Lo Storto (both Issue 4). It’s set during the earlier seasons of the series, and in it the crew of Deep Space Nine has to deal with an ever-increasing influx of guests. At first Sisko isn’t overly concerned, but when it becomes clear that most of those new guests have dubious intentions and start to create more and more trouble on the station, leading his own son being wounded, he and his crew have to find out what all the fuss is about.

This is the third trade paperback of Trek comics I’ve read and to be honest I’m not sure that many will follow. After a good start with New Frontier: Turnaround, for me Fool’s Gold is the second trade paperback in a row that was severely underwhelming, the other being Countdown. While the writing here is certainly better than with Countdown, it still is bad and pretty unimaginative. The story wouldn’t have felt much out of place in the line of Deep Space Nine young adult novels published in the 1990s, and if you keep in mind that I found the uninspired storytelling of a vast majority of those to be an insult to readers of all ages, you’ll know that this isn’t meant as a compliment.

To be honest I’m not really sure what to say about plot itself (treasure hunters on the hunt for a supposed big “Bajoran treasure”), other than that variations of that theme have been done to death in various genres and media, and that Fool’s Gold offers nothing new.

The characterisations aren’t bad, but they aren’t very good either: the Tiptons at least got the basic character traits of most of the characters right, but in the end there’s at least one scene for each character that just didn’t feel 100% right to me (for example, the nonchalant way Sisko dismisses Kira’s concerns in the beginning). And while I liked the idea behind the final few pages I’m not sure I’m buying Garak in the role he has there; he didn’t really appear to me as a money-oriented character. I guess you could call the characterisation the “strong” part of the comic, but that would be a hollow praise as it still isn’t on a very satisfying level.

Before I talk about the art I want to say this: on the internet Issue 4 is widely credited to Mantovani, too, but since the credits in the trade paperback are as mentioned in the first paragraph I’ll assume that is the correct group of people working on it. I can certainly see a different group of artist working on the final issue, as the art seems to be slightly improving there, although like with the characterisation that’s a hollow praise, too, as the art is even worse than the writing throughout most of the paperback. Not only is the art bad in my opinion, but you can’t even say it’s just the artist’s individual style, as even in the first three issues which were drawn by the same person it is all over the place. In some panels the drawings of the characters are decent, but then there are panels where he draws the same characters almost unrecognisably. The worst offenders in that regard are panels where the characters look like “vampirised” versions of themselves (a la Buffy, Angel). I guess Mantovani wanted to convey the feeling that they’re angry, but whenever I saw one of those I had to stop myself from throwing the paperback across the room, just because those drawing look so ridiculous. To end on a somewhat high note: wherever there are backgrounds, those are actually quite nice.

Overall Fool’s Gold is a huge failure in my opinion. None of the different people contributing to it were really able to make this comic an even somewhat worthwhile endeavour for the reader and as I said above it is another nail in the coffin to my interest in IDW’s line of Star Trek comics.