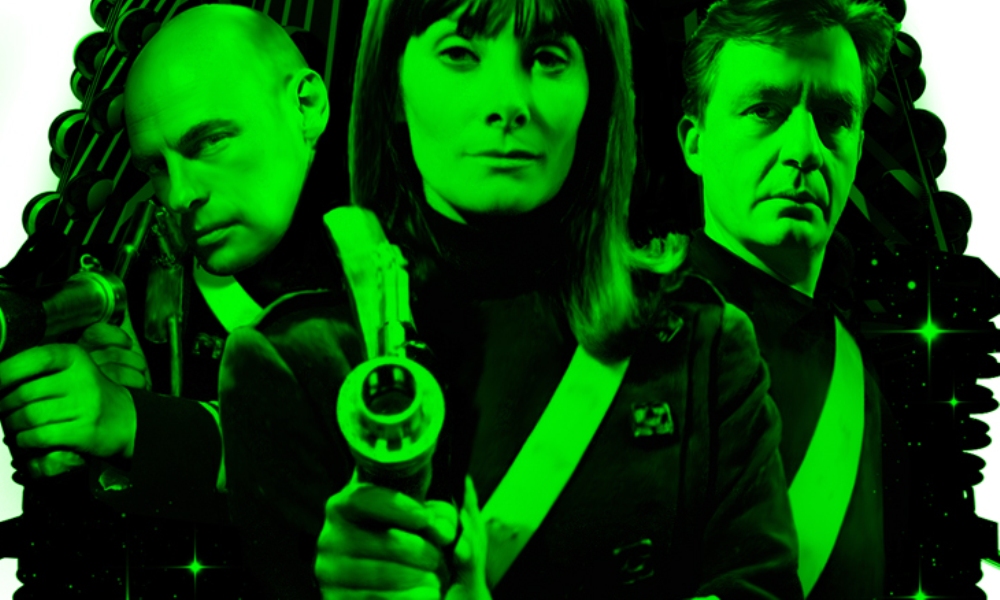 The second release of Big Finish’s second season of Doctor Who: The Lost Stories is similar to the first: The Second Doctor Box Set contains two never-produced 1960s Doctor Who stories, though the title is a bit of a misnomer. Only the first story, the four-part Prison in Space by Dick Sharples, is a Second Doctor tale. The other, The Destroyers, is the pilot episode of Terry Nation’s never-made television show, The Daleks. Other than that, though, it’s pretty identical in format to The First Doctor Box Set, with third-person narration jumping between companion actors and lines of dialogue voiced by the various cast members.

Prison in Space depicts the Doctor, Jamie, and Zoe stumbling into a future Earth run by women (usually just called “superiors”), where men (“inferiors”) are completely subjugated. Anyone who ever saw Star Trek: The Next Generation’s Angel One knows that there’s no way this can end well, and it doesn’t. It’s awful. Simon Guerrier says in the extras that when he adapted Sharples’s original scripts for audio, he shifted a lot of sexist dialogue from the Doctor to Jamie to keep things a little more tolerable, but that’s not really the problem.

The problem is that the narrative itself is sexist. Not only do the women wear skimpy outfits, the narration mentions it quite a bit. Why would they, if gender values truly were reversed? (There’s also a “hilarious” bit where Jamie sees some naked women.) All the women in the story are solely characterised by their appearances — one is “high-strung looking”, another is “butch”, and Chairman Babs, the ruler of the planet, looks like a toad, a fact we’re told at least three times. (And I lost count of how many times Sergeant Alice — the butch one — did something “bullishly”.) These women have absolutely no personality beyond these physical appearances, and indeed very little will of their own. As soon as the men start fighting back, the women just give up and lose. Zoe is reconditioned by Chairman Babs to be part of her new society… and then promptly stands around for two episodes. She’s saved by Jamie spanking her. Really, you can’t make this crap up.

It turns out that all Chairman Babs really wants is a “real man”, so when the Doctor shows up, she immediately starts wearing makeup and nightgowns and kissing photographs. ’Cause you know women — deep down inside they all really want a good shag. This is reinforced by the end of the story, which reveals that the reason Chairman Babs took over the Earth was because she could never get a man. Oh, the hilarity. Women have no ambitions other than getting men, after all. I was flabbergasted to learn that this was actually added to the story by Guerrier. That’s what he think passes for improved characterisation? The excellent Susan Brown plays Chairman Babs, but I’m not even sure why they bothered to get an actress in at all. It’s not like there’s any room for her to do anything with the part.

My problem with this isn’t so much that it’s sexist (it is), but that it’s bad drama. How are thin characters and poor motivations remotely interesting? Only if they’re funny, but despite everyone’s insistence on the extras that the whole thing was quite hilarious, I only laughed once, and I’m pretty sure it was at a joke that 1) I felt awful for laughing at and 2) was probably inserted by Guerrier, seeing as it references a fandom cliché that probably didn’t exist yet. (There’s a lot of physical comedy, too, but this works on audio about as much as you might except, which is to say, not all.) And if you subtract the sexist elements from the story, there’s nearly nothing left; it’s the dullest of overthrow-the-corrupt-government stories. The only striking bit is the cliffhanger at the end of Part One, and that’s undermined if you’ve paid attention to the title.

There’s potential in the idea of a story about gender reversal, it can explore the assumptions that underlie our culture, but there’s none of that happening here. And all of the insistence in the extras that the story is “of its time” is completely dumb for two reasons. First, Edward Bulwer-Lytton’s The Coming Race did a very even-handed and quite fascinating gender reversal story in 1871, and if a Victorian can manage it, I’m sure someone 90 years later could. Second, there is not a single other Doctor Who story quite this awfully sexist — except for the similarly unmade Mission to Magnus. The BBC wisely spared us from both; would that Big Finish Productions could have done the same.

I can say some positive things about the story: Frazer Hines and Wendy Padbury do good jobs. Neither is an amazing reader, but they’re both capable. Hines sometimes reads the narration with weird Shatner-like pauses in the middle of sentences, but his performances as both Jamie and the Doctor are spot on, and Padbury is a joy to listen to as always. David Darlington’s sound design was amazing — it felt like it had come straight out of any number of 1960s space stories, especially the door noises. And the music alternated between fun and annoying, which is probably also spot on. But I don’t see why I should listen to such a dreadful two-disc story to hear all this, when I could just pop in any number of Big Finish’s own superior Companion Chronicles starring these two instead.

The only thing — literally the only thing — that could have ever saved this story is Patrick Troughton’s performance. There are bits here that would have been a joy to watch. Alas, he is no longer with us. I’ve heard that this story was replaced by The Krotons; I don’t like The Krotons, either, but I’d take it over Prison in Space any day.

On the third disc, The Destroyers brings back Jean Marsh as Sara Kingdom — though if this is supposed to take place before, after, or sideways to her appearance in The Daleks’ Master Plan, I have no idea. (There is a reference to a character from this story in Big Finish’s The Guardian of the Solar System, though.) Sara is one of three agents in the Space Security Service investigating an Earth base destroyed by the Daleks.

Anyone who’s ever seen any Terry Nation Dalek story should know what to expect here: a lot of macho spacers versus scheming Daleks, plus long sequences of battling malevolent plant life in order to pad the thing out to appropriate length. It starts very tediously, with a long description of the Earth base that turns out to be irrelevant, but once the story gets to Sara and her colleagues, Jason and Mark Seven, it picks up a bit. (Well, not immediately. Then there’s a long description of Mark Seven that feels like it was pasted in from the series bible interrupts a conversation, but then it finally gets going.) Unfortunately, it’s a very visual story, and a lot of the impact is lost on audio — Nicholas Briggs and John Dorney’s functional prose isn’t really up to the task. That said, there’s a really slick fight with two Daleks over a chasm that looked amazing on audio, which I doubt would have been the case if it had actually been filmed.

The story’s fun, but thin — there’s not enough Daleks in it, and they don’t get any really good bits. And it’s quite obviously setting up a series that we’ll never get to experience, so there’s not even a plot resolution. Jean Marsh does an excellent job, of course, and all the rest of the cast don’t really have enough dialogue to distinguish themselves as characters or actors (it’s a Terry Nation story, after all), though I thought Alan Cox nailed Mark Seven’s robotic delivery.

The fourth disc is completely taken up by extras. I always feel a bit cheated when Big Finish does this, as I know that I’ll listen to the extras once and never again. No three discs of story require a whole disc of extras, and that’s the case here — some information about Prison in Space is repeated three times, between the booklet, the interview with Guerrier, and the interview with the cast. Why not edit this stuff down a bit? It’s also a bit cruel to ask actors to try to come up with something insightful to say about a script by Terry Nation. I don’t get why this release (or its predecessor) was four single CDs, either; two double CDs would have been much less obnoxious on the shelf. Though it would be a shame to lose all the fine Alex Mallinson cover art — I love the neon green cover for The Destroyers on the Disc Three!

After how much I enjoyed The First Doctor Box Set, this most recent release was a return to the type of stuff we saw in the first series of The Lost Stories. If it wasn’t for finally getting to see what Terry Nation’s Dalek story would have been like, this would be yet another release that was better off lost…