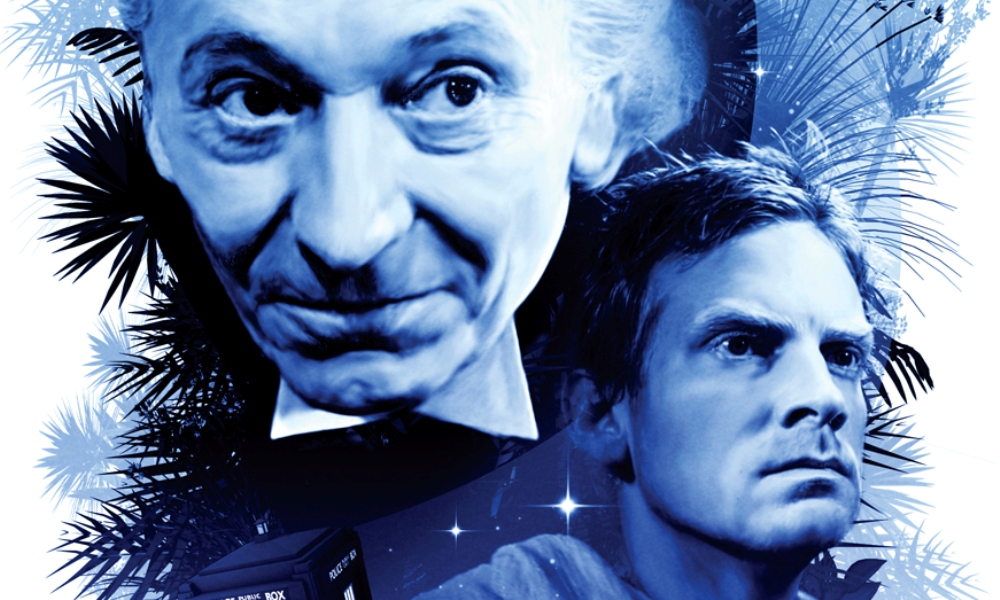 After the first series of Doctor Who: The Lost Stories one might be better off thinking the slogan ought not to be “Found At Last!” but “Better Off Lost!”. Despite those stories’ lacklustre quality, a second series was soon commissioned, the first volume of which is The First Doctor Box Set. The first Lost Stories to not feature the Sixth Doctor and Peri, The First Doctor Box Set contains two stories that were written by Moris Farhi in 1964 and pitched to script editor David Whitaker. Whitaker ultimately chose not to accept the stories, but a couple years ago the scripts were reprinted by the fanzine Nothing at the End of the Lane, and now they’ve joined the ranks of Big Finish’s Lost Stories.

The stories feature the original TARDIS crew of the first Doctor, Susan, Ian, and Barbara, and given that two of those four actors have regrettably passed on, The First Doctor Box Set isn’t a full-cast dramatisation as in the first series of Lost Series, but more of an “enhanced audiobook” like the Companion Chronicles. Nigel Robinson handles the adaptation. William Russell and Carole Ann Ford share the narration duties here, both narrating in the third person. They perform Ian and Susan, respectively, of course, and there’s also an attempt to maintain consistency in which other characters they narrate and speak dialogue for, especially with the TARDIS crew, where Russell usually does the Doctor’s lines, and Ford does Barbara’s. As in most Companion Chronicles, there’s guest voices, too; John Dorney (perhaps better known as a Big Finish writer, though he acted in a couple Eighth Doctor plays way back when) and Helen Goldwyn (a Big Finish stalwart) also have parts. The format is a little unusual at first – there’s a lot of slipping between the two narrators right at the beginning – but it works really well overall. It’s a good compromise between doing a complete talking book and having to recast the original TARDIS crew with inferior performers.

The first story, Farwell, Great Macedon, is a six-parter that spans three whole CDs, though at over three hours, it would have had to be a nine-parter to actually air during the Hartnell era. The tale sees the TARDIS crew landing in the Hanging Gardens of Babylon and becoming involved in the court of Alexander the Great; as in many actual Hartnell stories, circumstances contrive to keep them there, with the TARDIS springing a fuel leak. As the Doctor works to refuel the TARDIS, a group of conspirators plot to kill Alexander the Great and his immediate successors, to seize power for themselves.

Despite its length, Farewell, Great Macedon is fairly plotless, or at least the plot is pretty linear. One by one, Alexander’s friends are killed by the conspirators, but despite being designated omens of evil by a conspirator who is also a prophet, the TARDIS crew doesn’t do a whole lot. Oh, the Doctor works to save the lives of individual characters, and there’s lots of interaction between the TARDIS crew (especially Barbara) and Alexander, but no-one investigates the murders; the conspiracy just unfolds with almost no impediments. Things really shift in the fifth and sixth parts, though, as the TARDIS crew is accused of murder, and then Alexander himself becomes ill, and this is where I became considerably more interested. The story does not draw as much drama as it could out of the TARDIS crew not being able to do anything, either, though perhaps that ground was already covered well enough in The Aztecs.

Where the story really succeeds, though, is the characters. In the CD Extras, several people comment on the fact that Farhi just gets them even though all he’d seen was the material up to Marco Polo. The Doctor is the Doctor of the early years: often sidelined, but irascible and clever, sly when he needs to be, compassionate at other times. I would have loved to have seen William Hartnell perform the material the Doctor gets in the last two episodes, especially. Ian Chesterton doesn’t get a whole lot to do, but what he does do is excellent; there’s some great arguments between him and Barbara about changing history, and he even gets to argue with one of Alexander’s generals in a sharp sequence. Barbara Wright perhaps gets the best material, torn between her admiration for the historical Alexander and her knowledge of his imminent demise. It’s interesting how this early script has her treating the time period as irrevocable history whereas the Doctor treats it like any other destination they visit and does as he pleases. Only Susan Foreman really suffers; there’s an awful bit the first episode where she thinks they’ve died and gone to heaven (though the Doctor gets some good lines in reply) and other than that she’s pretty much a non-entity; Ford seems to spend more time voicing Barbara.

The worst thing you can say about Farewell, Great Macedon is that William Hartnell and Jacqueline Hill aren’t in it, but Russell and Ford acquit themselves more than admirably. Despite their age, both are energetic, exceptional narrators. Even when not much seemed to be happening, I found myself entranced and engaged; it was only when I paused the story to do something else and reflected on what had happened when I realised the answer was “very little”. The only fault in the narration is not so much the actors’ as in the scripting; on screen, I am sure the multitude of personalities of the conspirators would have come across very well with individual actors to play them all, but here, with two actors voicing all of them, they often blended together for me. Alexander’s counsellors, on the other hand, who all had very distinct personalities, came across much more clearly.

Russell’s performance of the Doctor is spot-on without being a caricature of Hartnell, and sometimes I swore that Ford’s lines were actually being read by Hill, so good were her intonations. And of course, they perform their old characters just perfectly. It was a nostalgic joy to listen to the two actors at work.

The weak link in the performances in Farewell, Great Macedon was John Dorney, unfortunately. Most of the time he was serviceable, but his voice just didn’t have the necessary weight to convince as someone with the charisma of Alexander the Great. His quieter scenes were good, but when he was called upon to shout, he came across the way someone with little authority blusters when they have no other way to get people to pay attention, and that made Alexander seem an ineffectual leader. However, his long monologue in Episode Six about his dreams of seeing a united world were absolutely astounding, making me feel a little wistful myself, and perhaps his weak performance elsewhere was excused by those great moments.

Though perhaps a bit long and meandering, Farwell, Great Macedon is probably only one rewrite from being a great historical to rival what will always be the definitive one for me, The Aztecs. It’s a shame David Whitaker didn’t take this up; I’d have much rather seen this on screen than The Web Planet or The Sensorites or, God forbid, The Keys of Marinus, despite all its weaknesses.

The set is rounded out by the intriguingly-titled The Fragile Yellow Arc of Fragrance on Disc Four, a one-part story completely different from Farewell, Great Macedon in every way. The story picks up with the TARDIS about to depart the paradisiacal world of Fragrance after having spent a few weeks there, with the Doctor trying to fix the TARDIS so he can get Ian and Barbara back home. But during their time there, a young man named Rhythm has fallen in love with Barbara, with dire consequences for one or the other of them…

Had this been produced, this would have been one of the most intriguingly alien worlds of the Hartnell era, though I doubt the ability of the production team to create some of the visuals generated here. The main triumph of the story is also its main sadness: it gives a fantastic part to Barbara, and unfortunately Jacqueline Hill was never able to perform it. That said, it’s still a fascinating, sad little story, completely unlike anything in televised Doctor Who that I can think of. The last few scenes, as everyone realises what Barbara has done, are especially painful yet evocative.

For some reason, though, there’s a weird subplot about the Doctor describing the TARDIS console to a couple from Fragrance (in detail comparable to that of one of those boring Star Trek “technical” manuals) while Ian distrusts them. It’s no wonder Ian gets a little ticked off when the Doctor shows them the TARDIS; he kidnapped Ian and Barbara for less! But other than that, this story shines, and Big Finish’s recreation of it does as well.

Ford and Russell put in the same strong performances as in Farwell, Great Macedon, and John Dorney is back as Rhythm. He does a good job, but it’s a little too obvious that it’s the same actor playing completely different characters in sequential stories. I’d have rather seen someone else tackle Alexander so that I wasn’t distracted during his performance here. Helen Goldwyn completes the cast with a fine job as a couple of the other inhabitants of Fragrance (Fragrances? Fragrants?).

The only thing I really didn’t like about The First Doctor Box Set was Toby Hrycek-Robinson’s music. I think it’s supposed to be evoking the sparse kind of scoring we got in The Aztecs, but it ends up sounding like a harmonic muddle, with the same “gloomy” music swelling in loudly every time something bad happened. And the chime-y “flashback” music nearly made me laugh out loud, it was so bad.

On the other hand, this set features some of the best extras I’ve heard on a Big Finish release. They’re more like those of a Companion Chronicle than a full-cast audio (which is obviously a good thing) and they feature some good stories, thoughtful comments, and funny jokes, especially from John Dorney. There are also some great reminiscences of the early days of Doctor Who from Ford and Russell. The only disappointment is that they don’t interview Moris Farhi himself, but the long essay he gets in one of the CD booklets makes up for it. (Nigel Robinson also has both a good interview and a good booklet essay.)

There’s a lot to love in The First Doctor Box Set, and foremost of them is that it gives us new adventures for the first TARDIS team, which remains one of the greatest to this day. The stories here press my nostalgia buttons just right, but still manage to do something new and different and exciting. The specifics of the third series of Lost Stories are as yet unannounced, but I really hope it includes more material for Carole Ann Ford and William Russell; I want to travel back to the 1960s again sometime soon.