Doctor Who: The Resurrection of Mars review 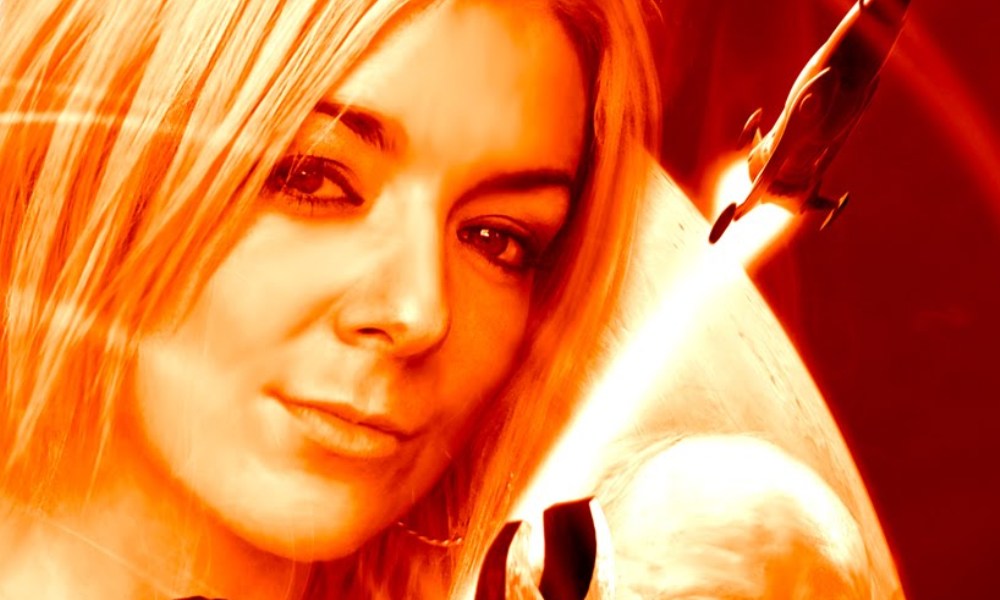 The Resurrection of Mars is the continuation of last month’s Deimos, as the Doctor and Tamsin continue to be menaced by the dreaded Ice Warriors. Only this time out, there are some added complications. Once again, I have to touch on some spoilers for the previous releases in this season to be able to talk about it – but they’re nothing you wouldn’t be able to figure out just by looking at the cover for Resurrection of Mars.

The shock revelation at the end of Deimos was that, moments before the Doctor was set to blow up the Deimos moonbase so he could stop the Ice Warriors from activating their reionising whatsit and killing every colonist on Mars, he received a text message from none other than Lucie Miller, last seen (by him) leaving his company “for good” in Death in Blackpool, last seen (by us) hanging out with the Meddling Monk in medieval Ireland in The Book of Kells. It turns out that she was hired by the Monk in the Apprentice-style competition in Situation Vacant, but she ended up souring on the whole travelling-with-an-amoral-meddler-in-history thing and decided she wanted out. So the Monk dropped her off on a moonbase moments away from exploding. Naturally.

As a result, The Resurrection of Mars is a very different beast to its predecessor. Whereas Deimos was one of your usual base-under-siege stories, with Ice Warriors stalking corridors and gigantic devices being flipped on and off and the Doctor being mistrusted by figures of authority, Resurrection hinges around the machinations of the Monk, as he attempts to rewrite the course of history… and rewrite the Doctor’s relationships with his companions to boot. There’s a lot here about how the Doctor justifys his decisions – why can he let the friendly security guy die in Deimos to save Mars when he can’t let Lucie die to do the same? Why won’t he let the colonists on Mars die to save the butterfly people of Halcyon?

These are good questions, but I’m not convinced that Jonathan Morris’s script explores them in a fully coherent fashion. Why is security chief Grenville not worth saving when Lucie is? The Doctor spends much of Resurrection saying he can never let an innocent die at his hand even if many more are at stake, but no-one ever brings Grenville up after the first couple minutes. He rails at the Monk for interfering in the Web of Time, but as anyone who’s heard Storm Warning will know, it’s something he’ll do gladly on occasion. Trying to derive a coherent morality out of Doctor Who can be difficult, since the moral imperative tends to depend on the needs of the current story, and unfortunately, the Doctor doesn’t even do a good job justifying himself to his companions, merely giving some potted speeches that don’t really address the point. (And Tamsin takes issue with the Doctor sacrificing Grenville to save the day… but later takes issue with his refusal to sacrifice Lucie to save the day. Does she have a consistent morality herself?)

Now, I like Lucie Miller, whereas I’ve been very slow to warm to the personality-less Tamsin, but I also liked how Lucie was written out in Death in Blackpool. And though Tamsin doesn’t do a lot for me, I don’t know that what happens to her in Resurrection really works. In part, it’s kinda insignificant, because we’ve only seen her with the Doctor for two previous stories, and their relationship never felt very developed to begin with. And in part, she hasn’t been characterised enough – her actions don’t feel like something she would or even would not do, because I don’t have any sense of her beyond being a Generic Companion. I also don’t think that bringing Lucie back into play is anything other than a step backwards, on the same level as Rose’s ultimately pointless return in Journey’s End. I mean, I like looking at Billie Piper, and I like listening to Sheridan Smith, but in both cases the characters had excellent runs that seemed complete in themselves. And if they had to bring Lucie back, I’d like to see her being demonstrably different to the Lucie we left in Blackpool whenever it was, but she’s pretty much the same as ever here.

As for the Ice Warrior plot, it’s basically everything that happened in Deimos all over again, and the resolution is particularly uninspiring.  So you’ve kinda got to bank everything on the more personal story, but it’s not sold well enough.

The Doctor is curiously low-key in this story – Paul McGann can’t even sound excited when he decides to impersonate an Ice Warrior. (Though I did like the bit about dinosaurs.) There are some weird scenes where he seems to just stand around waiting for other people to make decisions, or feels like he’s trapped between two equally terribly choices. It always feels artificial to me when this happens to the Doctor, since so many stories hinge on his ability to not be trapped in binaries and see the solution no-one else can.

Sheridan Smith is on good form as Lucie again, of course – almost too good of a form, as it feels just like old times between her and the Doctor, and clearly it shouldn’t. Niky Wardley does an okay job as Tamsin, but fails to sell it in a few scenes where there’s a really big “it” to be sold. The scene where they meet is the kind that’s become pretty typical since School Reunion, but Morris doesn’t waste any time on it.

The real standout performer here is Graeme Garden as the Monk. I don’t think Resurrection plays to his strengths quite the same way that Book of Kells did; he works best when he’s more of a spanner in the works, playing a role but half-mockingly, whereas Resurrection requires a lot of the Monk taking the lead and doing some evil-villain-dialogue. His last scene is the worst offender on this score. But Garden obviously relishes the role and gets some very good bits. The way he gloats at the Doctor is positively divine.

The rest of the guest cast virtually disappear in this one, unfortunately, with the even-more-unfortunate exception of Nicholas Briggs’s Ice Lord. Thankfully, there are almost no scenes of dialogue with just Ice Warriors in them.

The Resurrection of Mars wants to be a really important story, in terms of really big plot events as well as significant character moments. But it never quite hung together for me: the examination of the Doctor’s morality doesn’t go anywhere, and the other plot is far from interesting. So in the end you’ve got a lot of decent-to-great actors doing their best with ineffectual material, which isn’t bad… just there, mostly. And what merits the story does have are overshadowed by the fact that I’m really uncertain about where the Eighth Doctor adventures are going these days…