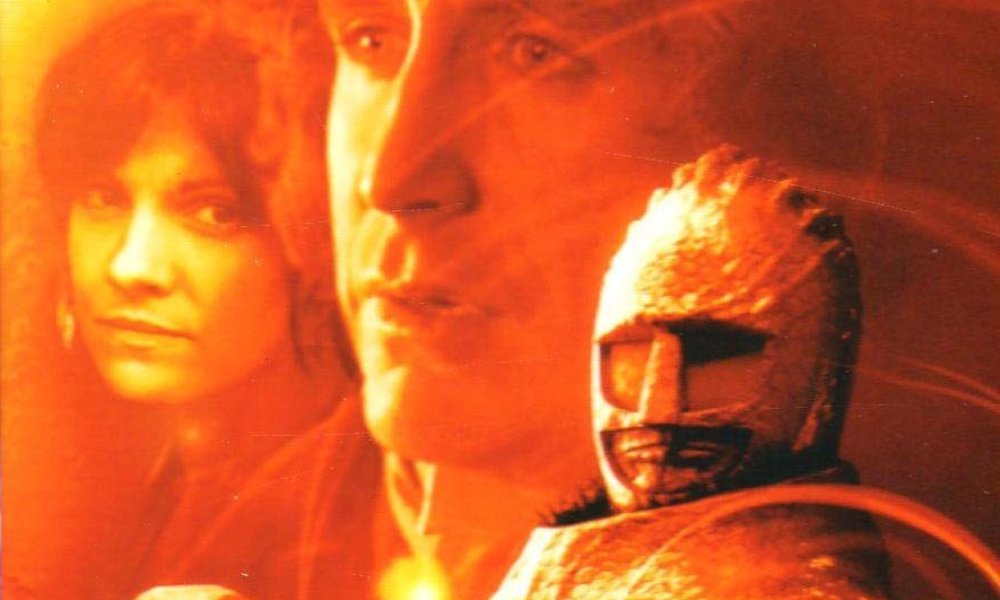 Teasers are important things – they’re the first bits of the story you hear, after all. Which makes it rather unfortunate that Deimos opens with a completely awful one. It begins with some Ice Warriors hissing at each other in an awfully melodramatic fashion. We eventually find out that this is fake – a couple at a museum are watching a historical recreation – but it doesn’t quite work. Bad enough to be recognisably bad… but not bad enough to actually be funny, it just grates. The story then moves to the folks watching the recreation, who are touring an Ice Warrior tomb on Deimos, moon of Mars. They see some Ice Warriors approaching them: actors in costume, of course? Of course not, as anyone who’s ever listened to a story can tell you. One dumb fellow tries to get his picture taken with them, and you can guess what happens to him. When your genuine story is as melodramatic as the one you’re mocking, something’s not working right.

The reason this teaser is so unfortunate is that Deimos is a rather decent adventure for the Eighth Doctor and Tamsin, all told. I mean, Tamsin doesn’t get a lot to do, of course (she is locked up rather a lot, though she does tell more unconvincing lies, a running gag I am growing to enjoy), but we have here a fundamentally decent base-under-siege story. Tourists at the space museum on Deimos are under attack by a recently revived group of Ice Warriors, and only the Doctor stands between them and the devastation of the Martian colonies. As he does, you know.

What elevates the story is an excellent cast. The standout for me was Nicky Henson as Grenville, Deimos’s security chief, a kind of grizzled fellow looking for quiet, but willing to do what it takes. Susan Brown (late of Torchwood: Children of Earth) and Nick Hilton elevate Mars holidayers Margaret and Harold above the simple stereotypes they could be, especially with their mix of determination and humour. And of course you have David Warner as Professor Boston Schooner, putting in the usual determined performance that he always does.

Paul McGann is on fine form this time out, too; the Doctor sounds steely and adventurous when he needs to, but he also gets some good comedy moments when he and Tamsin half-successfully integrate themselves into a tour group.

Not everyone is entirely successful: Tracy-Ann Oberman (late of Torchwood One in Army of Ghosts) overplays Temperance Finch, the museum administrator. I had a hard time buying that someone who is usually responsible for shuttling tourists about would be so willing to make the hard decisions that quickly. The only performance I felt was really lacking was Nicholas Briggs as the Ice Warriors. I love his Daleks and Cybermen and Judoon, but when he does Ice Warriors, he really does just sound like Nick Briggs putting on a funny voice.

(Mind you, I don’t think the Ice Warriors are good audio villains in general. Their main appeal to me has always been their distinctive appearance; their slow and methodical way of talking can get annoying after a while. Believe me, I know what I’m talking about: when I was a young fanboy, I made an audio drama with the Ice Warriors in it, and those scenes were dead boring and twice as slow.)

It’s good that the performances are so nice, as the writing is a little on the sketchy side. The characters are all more types than people in the script; not much distinguishes them from any number of base-under-siege occupants. (You’ve got the bloodthirsty one, the sympathetic one, the treacherous-but-in-turn-betrayed one, and so on.) And the story feels a little simple. Deliberately so, I think: the Doctor and company wrap things up nice and easy, but then get thrown for a loop in the last few moments. This doesn’t work entirely, as we the audience know that can’t be so ’cause The Resurrection of Mars is coming next month. The cliffhanger itself is nice: I guessed it only second before it happened, and only because I tried to think “What zany curveball would I throw if I were Big Finish?”. So don’t ask yourself if you don’t want to be spoiled. And it’s a cliffhanger that has me very curious about the next part to boot.

There’s a few nice moments, though: the bit where the Doctor gets on a buggy, Harold making a distress call, Professor Schooner meeting the Ice Warriors for the first time, and so on. I also appreciated the nods to Phobos; I like it when Big Finish builds up an internal continuity for itself. (As long as it doesn’t involve Thomas Brewster.) I’m a little sceptical of the scene where the Doctor essentially interrogates an Ice Warrior, though; usually he’s more clever than that. (Fighting with words, or whatever Max said in Voyaged of the Damned.)

But overall this is an above-average adventure for the Eighth Doctor (if not poor Tamsin). Good performances and nice moments elevate an average script for me, and leave me very interested in what Part Two has to offer. If only the Ice Warriors didn’t talk so ridiculously slowly.