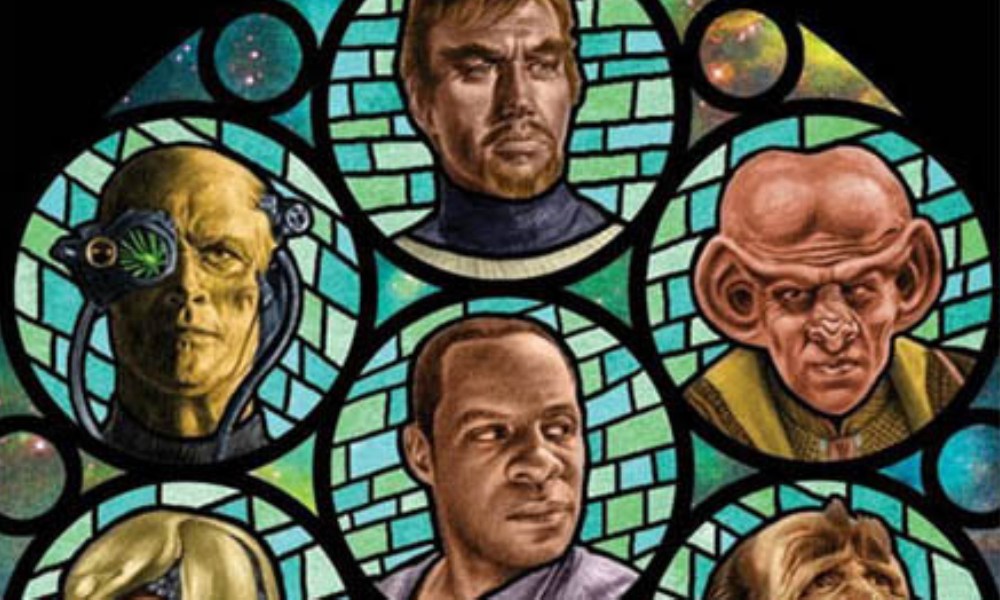 The anthology starts off with The First Peer by Dayton Ward and Kevin Dilmore, tying the Romulans to the sin of pride. Uneasy about recent activities by Starfleet, the Romulan Empire hatches a plan to ally themselves with the Klingons for a technological exchange. Spearheaded by Proconsul Toqel, who is sure of her superiority over the Klingons, a deal is brokered. But can she really trust the Romulans’ new-found allies?

The First Peer is a decent story, which makes good use of the Romulan/pride combination. The only real downside to it is that with the exception of the final revelation, it is a tad too predictable. To some extent that’s because you know the story’s sin is pride, so you simply expect that the plan will backfire for Toqel, especially because she is warned to not underestimate her counterparts. But ultimately the good characterisations and Wardilmore’s usual engaging writing style make this one an early keeper in this tome.

Next up is Reservoir Ferengi, written by Scottish author David A. McIntee which, as the title suggests, features the Ferengi and connects them to the sin of greed. When Brunt is expelled from the FCA he joins forces with Quark’s cousin Gaila in the arms-dealing business. All goes well for a while, and Brunt even finds a woman he likes, but when Gaila goes too far Brunt has to decide whether deep inside he’s still Brunt, FCA.

I’m a huge fan of Ferengi in general, and always had a soft spot for Brunt(, FCA) specifically, so this story is right up my alley. Reservoir Ferengi is a very well-written story with strong characterisations. David A. McIntee manages to tell a tale that has Brunt as the “hero” but keeps him 100% Ferengi at the same time. He is also able keep the humour often associated with the Ferengi without ridiculing them, a thin line not all writers are able to walk. Definitely the highlight of the anthology.

The Cardassians take the spotlight next, with James Swallow’s The Slowe Knife, a story about envy. When the Gul of the Rekkel is killed, the tactical officer Enkoa is supposed to take the lead, but without the help of fellow officer Kein he would have got the whole crew killed. When he is promoted to captain his own vessel afterwards, and she has to be his first officer, jealousy is building up inside her. Soon a chance to expose Enkoa as the failure he is presents itself, but will she really get all what she thinks she deserves if she takes the opportunity?

It’s not a bad story, but not quite as good as its direct predecessor, either. There’s nothing to criticise about the writing style or the characterisations, but the story is pretty much just chugging along. It’s a very believable tale of a woman denied the rightful prize for her actions, who is eaten up from the inside by her envy for the man who undeservedly got the post she deserved, but it lacks those special moments that make a story stand out. Nonetheless a nice read.

Star Trek veteran Keith R.A. DeCandido pens the next story, The Unhappy Ones, a tale combining the sin of wrath with the Klingons. When the relationships between ridge-headed and smooth-headed Klingons deteriorate into an all-out rebellion at a mining endeavour, Kang, Kor, and Koloth are sent to deal with the situation. Being smooth-headed, they soon experience the disgust of the ridge-headed Klingons themselves.

The Unhappy Ones is another solid tale. As always, DeCandido delivers a well-written story with believable characterisations, but like James Swallow’s Cardassian story it’s missing something to become really memorable. It’s nice to see the three Klingon TOS captains together, though, and DeCandido captures them really well, so even if this isn’t the pinnacle of his writing career it certainly is a very nice way to kill some time.

Freedom Angst, written by Britta Burdett Dennison, is the only story in the anthology not using a race to represent its sin (lust), but a whole universe – the Mirror Universe, to be precise. When Ben and Jennifer Sisko get the offer to move to Terok Nor and work for the Intendant, they’ve a hard choice to make, especially Benjamin, who had his records altered to make his work efficiency look more impressive. Living in a strained relationship with his wife he soon finds himself in a whole lot of problems.

Sadly, this one is the story that stinks up the joint a bit in an otherwise very solid anthology. It isn’t totally bad, but it can’t really hold pace with the other stories in any area. The writing is somewhat grating and isn’t really able to suck you into the story; I don’t think any of the other stories took me as long to get through. The characterisations are okay, but somewhat superficial; you just don’t really identify with any of the characters. Overall not a really memorable entry.

Revenant by Marc D. Giller is the penultimate story of the collection and features the Borg, representing gluttony. When Nicholas Locarno leads the crew of the scavenger Celtic to the Korso Spanse they find every scavenger’s dream, a deserted Starfleet ship. But soon they realise what has happened to the ship, and that they weren’t quite as lucky as they thought.

It’s an average story, certainly better than its predecessor, but not quite up to par with the quality of most of the others. It’s written competently enough and the characterisations are adequate, too, but the story itself is a tad too predictable for my taste. While I appreciate a good Star Trek horror story as much as the next guy, this one is mostly an accumulation of known horror tropes and doesn’t bring enough new stuff to the table to be more than a quick time-killer, whose specifics you probably will forget rather soon.

The anthology ends with Greg Cox’s Pakled story Work is Hard, featuring the sin of sloth. When the Enterprise intercepts a distress signal from a Pakled ship they’re not to keen to answer it given their history with Pakled distress signals, but ultimately have no choice. They soon learn that the emergency is real and Geordi, among those most disgusted by their past dealings with Pakleds, has to work closely with their engineeer to help rescue the ship. Will he be able to make the engineer understand what to do in time?

Surprisingly, it’s a very decent story. To be honest I had my doubt if Cox, or anyone else for that matter, would be able to tell a readable story featuring the Pakleds so heavily, but he succeeded. Granted, the Pakled engineer seems to be one of the brighter bulbs in a sea of low-wattage ones, but he remains Pakled enough for me to let it slide. While in the end it remains what I guess it was aimed to be – the comic relief story – Cox was able to make it an engaging story, too, and you actually begin to root for Snollicob, the Pakled engineer. Work is Hard maybe isn’t the best story in the anthology, but the biggest positive suprise for me.

Overall, Seven Deadly Sins is a very solid anthology. There’s only one story which is really sub-par and one story which is the epitome of mediocrity, but all the other stories are decent to good. Maybe a real home-run is missing, and sometimes the race-sin ties are somewhat superficial, but I would have no problem to recommend this anthology to anyone seeking for a bunch of entertaining shorter Star Trek stories.