Doctor Who: The Book of Kells review 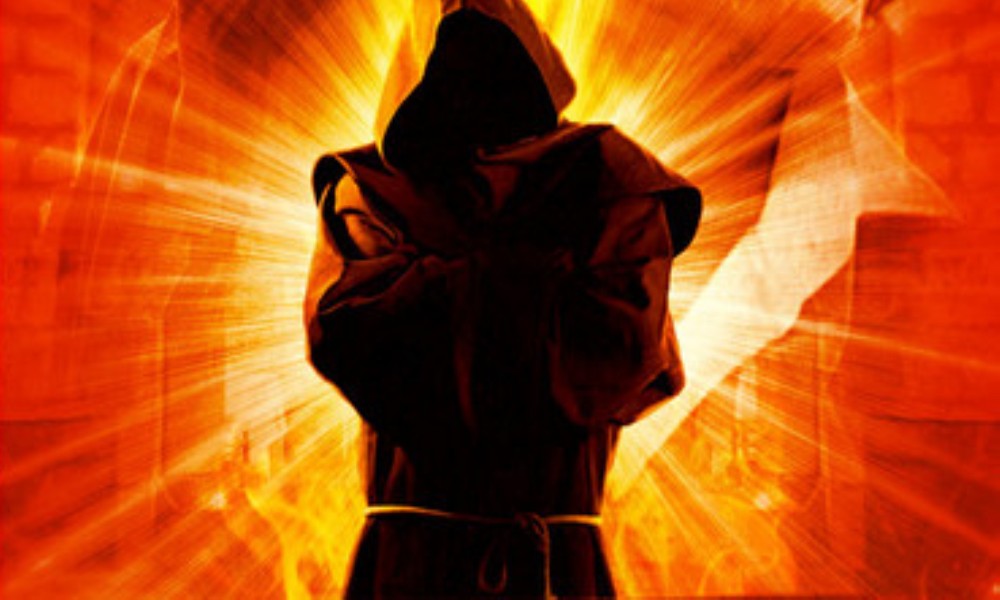 Often, things I do in graduate school weirdly overlap with what I am listening to in Doctor Who audio dramas, probably because Doctor Who will shamelessly steal from anything. Last week I relistened to Matthew Sweet’s Year of the Pig, which homages plot elements from Wilkie Collins’s The Woman in White, a novel I read last year for class – in an edition edited by Matthew Sweet. This time around was even more synchronised, as I listed to The Book of Kells the week before discussing medieval illuminated manuscripts – including the actual Book of Kells – in a class on the juxtaposition of word and image.

In this month’s adventure, Barnaby Edwards plunges the TARDIS into medieval Ireland, where everyone is getting tremendously excited about the Book of Kells, a new gospel being produced at a monastery in Kells. It was not completely clear to me why everyone is so excited about it, but within moments of landing, the Eighth Doctor and Tamsin have already heard of one plot to steal it, and decide it’s probably their obligation to stop it – especially if whoever is stealing it also has the capacity to pull TARDISes and vortisaurs right out of the space-time vortex.

The Book of Kells could just be your typical historical romp, like Season Three’s The Beast of Orlok (also by Edwards), but there are two twists, both relating to the ongoing plots of the season, which drastically altered how I reacted to the story. I feel sort of bad mentioning there are twists, since I think the mere fact of their existence could cause the listener to guess what they are, but I’ll restrain myself, and refer to them only as “the first twist” and “the second twist”.

The first twist is… okay. I got it the same time the Doctor did, when he put together all the clues, and like him, I feel dumb that I didn’t get it earlier. I did at least get it shortly before he said what it was out loud. I don’t feel it actually changes the story in any substantive fashion, it just changes how us listeners react to it. (Though if I may go all literary critic on you, reader-response criticism would tell you that those are the same thing.) It could be fun, if you’re into that sort of thing (like Big Finish obviously is), but I think it sets the possibility for some interesting adventures in the future, and hopefully that actually happens. It will, judging by one of the comments on the extras.

The second twist leaves me wondering. Which is I suppose what a twist is all about. It’s obviously going to affect things later on in the series. I sort-of got this one ahead of time, but not the exact mechanics of it – which I think were pulled off fairly well. Even if it requires a rather improbable set of circumstances to make it work all the way through. This is one of those twists where you’ll want to give the story another spin with that information in mind. It might be dipping into the past too much even for Big Finish, but on the other hand, it’s a bit of the past I like quite a bit. So I’ll stay on the fence until things are clarified and explained in that regard.

Both of these twists together sort of make sense of some of the references in Situation Vacant and Nevermore; I’m looking forward to seeing these explained fully later in the season.

With twists, its often easy to let them overwhelm the rest of the story – witness M. Night Shyamalan, who did a twist so big in his first major film it’s overwhelmed the entire rest of his career. It’s particularly easy with The Book of Kells because when you take away the twists, there’s not much left: the story is mostly a bunch of characters running around in circles looking for a book. I did like the final revelation of why the book was so important, especially given the way (to be vague) the representation of the thing also turned out to be the thing, a very interesting idea that ties into my word and image class. The characters in this aren’t exactly up to much: monks both pious and conniving, a tired warrior pining for the old days, and an angry strong-man are about the extent of the characterisation here.

The acting is fine. Graeme Garden, by now surely a Big Finish stalwart, steals the show as Abbot Thelonius, though I feel he didn’t get to sink his teeth into quite as much as he should have, thanks to the mechanics of one of the twists. Jim Carter does a decent job as Brother Bernard, the shifty librarian. Barnaby Edwards calls him a big Hollywood star in the extras, but I’ve never heard of him. I guess someone who was in Ella Enchanted is a huge casting coup. Terence Hardiman, recently in The Beast Below, is wasted as King Sitric, and the part of Olaf Eriksson is so generically written is that all I can say is that Nick Brimble puts on an… interesting accent. Rounding out the guest cast is Ryan Sampson, who is likeable enough, and Ash Hidminster, whose performance is hampered by the fact that he seems to be putting on a funny voice throughout.

As far as the main cast goes, The Book of Kells is the best story Tamsin Drew’s had, but Situation Vacant and Nevermore haven’t exactly set a high bar. I feel like I’m finally kinda getting to know her as a character. Unfortunately, that character is kind of a less bright Lucie Miller whose jokes always fall flat. On the other hand, the back-and-forth between Tamsin and the Doctor at the beginning is great, and I loved the segment of the story where she impersonated a nun, though I did question why no-one said anything about her undoubtedly-scandalous attire. The lively dialogue also brings out the best in Paul McGann, who puts in his best performance in a Tamsin story yet.

Everyone will probably always talk about the twists in this story, and I think it’s justified, because once you remove them, you have pretty much a bog-standard runaround. But the problem is that – for me at least – the twists exist in such a state of wait-and-see-how-they-affect-future-stories, that it’s nearly impossible to know whether I actually like the story or not. Without it the twists, it’s just another average entry in the range. With them, it could be great… or it might turn out to be horribly, horribly misguided. Please don’t let me down, Big Finish.