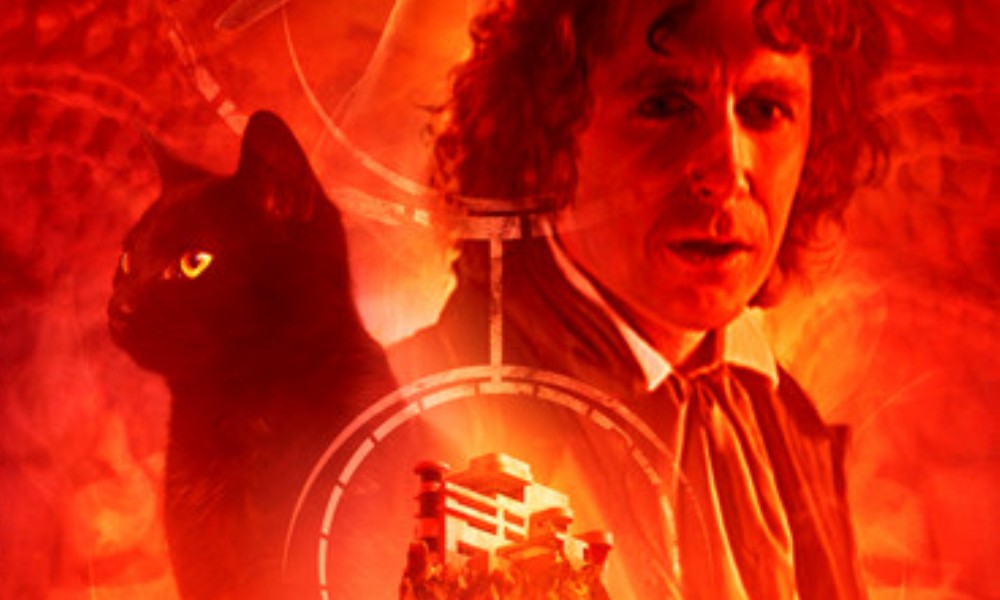 (If you haven’t listened to the previous New Eighth Doctor Adventure, Situation Vacant, there are heavy spoilers for that story in this review. Like, in the first sentence.)

The Doctor’s tour of the TARDIS for new companion Tamsin Drew is interrupted by the appearance of large black cat – a cat who sets the co-ordinates for Nevermore, a planet devastated first by biological attacks and then by a sterilisation from the Time Lords. Now the planet has only one inhabitant: Morella Wendigo, the woman responsible for the crime.

Nevermore is a curious mixture of things: on one hand it’s an Edgar Allan Poe pastiche (well, apparently; though I’ve read some of his poems, my greatest familiarity with his work comes from Ray Bradbury’s own pastiche of him in The Martian Chronicles), on another hand it’s a story about a great genocidal crime and the people who committed it, and on yet another hand, it’s our first real story for Tamsin, since she spent all of Situation Vacant operating under an assumed name. The problem is that none of these concepts are executed wholly well, and they don’t really mesh either.

There’s an interesting story about Morella and the secret behind the events on Nevermore aching to get out here, but it’s distracted by long sidetracks about Senior Prosecutor Uglosi – the man who sent her to prison – and his obsession with Edgar Allan Poe, an obsession that runs to staffing her prison with gigantic cyborg raves that squawk “nevermore!” on the slightest provocation. On the other hand, the gothic tale about the prosecutor gone mad and seeking refuge in the works of Poe is distracted by the fact that he has a part to play in a story about culpability and blame. Either could work on its own, but they don’t quite fit together, and each suffers from having to be linked to the other, especially as the link seems pretty arbitrary. Despite that, I enjoyed both stories over all, especially the secret behind Nevermore and the Doctor’s discussions about Poe with Uglosi. Though the climax of the story is weird and feels like an awful, out-of-nowhere cheat.

What entirely suffers is Tamsin. Niky Wardley does a decent job, but the material she has to work with doesn’t really help her. Most of the characters in the story are annoyed by Tamsin, and this includes the Doctor – in what is her first full scene ever, surely a misstep for introducing a new character that the listener is supposed to like. Tamsin is the first character to encounter Morella (ably played by Fenella Woolgar, who was Agatha Christie in The Unicorn and the Wasp), and we spend most of that conversation on the side of the unrepentant mass murderer! At the climax of the story, the Doctor actually tells her to get out of his way while he solves the problem. As far is Tamsin is concerned, this is no The End of the World; it’s not even a The Shakespeare Code. Given her introductory story spent very little time actually introducing her, it’s a shame that that’s not remedied here.

As alluded to before, Fenella Woolgar dominates the cast as Morella, getting in the most cutting lines and generally being the only intelligent character. Woolgar does a great job in bitterness and uncaring, though for some reason she plays the part as an American. (All of this despite a rather surprising revelation about Woolgar in the extras!) Michael Shannon puts in a fairly good performance as Uglosi, though I think he played the character better once he’d dipped into madness. Emilia Fox is wasted as Berenice Ward, Uglosi’s assistant; most of the time, she’s confused, and she’s often pushed out of the way by Morella. And once there are some good revelations about Berenice that could liven the whole thing up… she’s gone entirely! Eric Loren (who had to wear a really awful mask in Evolution of the Daleks) plays a couple other characters, but is largely a nonentity. And though John Banks had little to do as the ravens besides squawk a lot, I enjoyed them, even if they were more goofy than frightening. (I’d have liked to have seen them kill someone – or whatever – just so they’d actually seem frightening.)

Situation Vacant ended with the revelation that it was not the Doctor who’d set up the Apprentice-style companion showdown, but a mysterious other time traveller. There are some more revelations about said unknown in Nevermore, and those were perhaps the most intriguing and interesting part of the story. Not since Season One with Lucie Miller and the “Time Lord witness protection programme” have the Eighth Doctor stories succeeded in crafting an intriguing arc, but two stories in, and I am already wondering who this other time traveller is and what they are up to.

But too often in arc-based storytelling, the intrigue of the arc can outweigh the intrigue of an individual story, and though I largely enjoyed Nevermore, the fact that is various agendas never entirely came together means that it definitely happened here. And, more importantly, hopefully Tamsin Drew gets some solid focus soon enough.