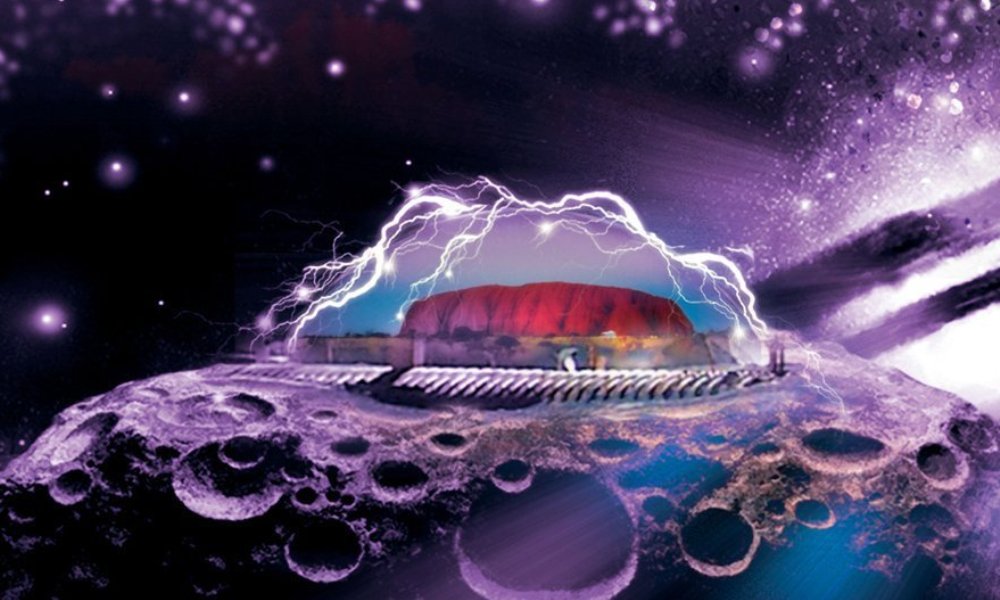 Dreamtime makes its setting clear from the very beginning with the unmistakable sounds of bullroarers and didgeridoos – and the sounds of people being forcibly herded somewhere. Whatever is going on, it’s going wrong; the teaser ends with the despairing last words, “It’s too late for us all!”.

The TARDIS lands in a strange nightscape – a large city with no signs of life except for the many standing stones… all of which have been carved with screaming faces. Flailing around for the slightest clue of where they are, Hex recognises Uluru in the distance. They’re in Australia… or are they?

The Doctor and his companions aren’t the only strangers here. The Galyari have landed on an asteroid, hoping to trade if they can find anyone to deal with. If they can’t trade, perhaps there would be some interesting salvage to make the trip worthwhile.

But they all have more troubles than they realise. The bunyip are coming for them and the Dream Commandos might not be able to save their souls…

If you can tolerate that last sentence, you stand a chance of liking the story. If you cringed… take the hint. The ethnobabble gets deep quickly; it’s meant to show the power of Aboriginal myth but just comes across as shallow, pompous appropriation. In the liner notes, Forward talks about the inability to find actual Aboriginals for the project. That’s a pity for several reasons – perhaps someone actually from that culture would have stopped him from coming up with the cringeworthy concept of Dream Commandos fighting with the music of their bullroarers.

This is the second time the Galyeri have been used in the main monthly range; they had previously appeared in The Sandman. These characters (played by the same actors) also appeared in the Bernice Summerfield story Bone of Contention.

It’s Hex’s first offworld outing, and it’s a pity that he goes from a strong, well-told story in The Harvest to a practically incoherent one in Dreamtime. Forward is trying to portray a surreal dreamscape with fluidly shifting realities, but he’s replaced most dramatic tension with either the Doctor shouting or vague mush like “The land dreams what it wills and wills what it dreams”.

At least that’s not a cliche. There are far too many painfully overused cliches in the dialogue: “Your weapons will be of no use”, “Your friends are lost to us”, “It is not easily explained”, “They must find their own way”. To be blunt, the listening experience could be considerably enlivened with a bingo card.