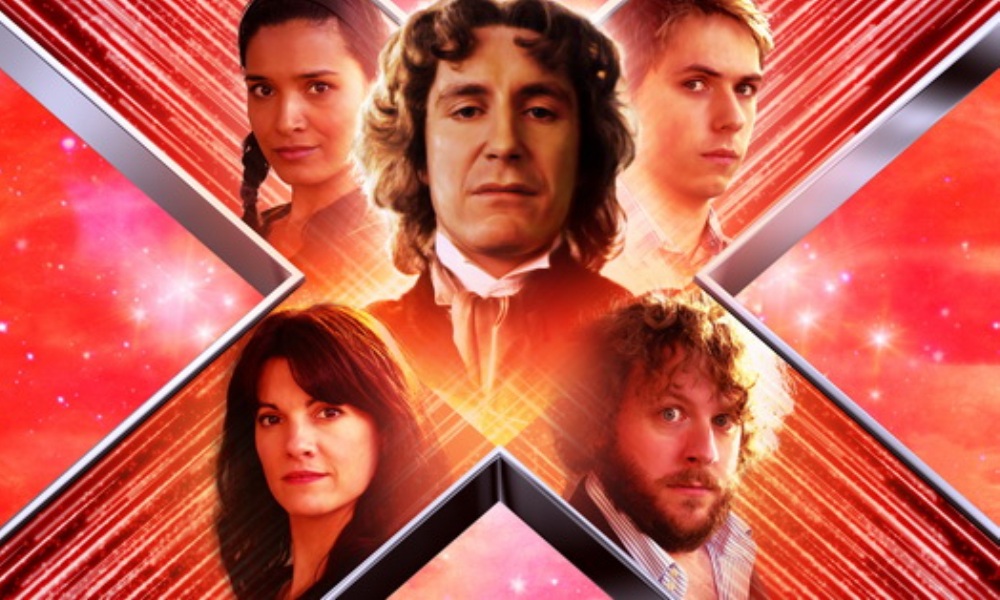 With Lucie having departed the TARDIS in December’s Death in Blackpool, the Eighth Doctor finds himself having to acquire a new companion – and he does so in a very unusual fashion in Eddie Robson’s Situation Vacant, picking between four candidates in a set-up fairly similar to the reality television show The Apprentice. The upshot of this is that, unlike with previous new companion stories, the listener has no idea which of the four will be joining the Doctor in the TARDIS until the very end.

The premise itself has a couple problems, unfortunately. The first is that is just doesn’t feel like something the Doctor would actually do. As he points out in the story itself, he travels with “friends”, and this is not how one acquires friends! There’s actually an explanation for this strange behaviour later on, which I guessed at while listening, but it’s an explanation that works to the story’s disadvantage, as it requires the Doctor to know something that the story keeps from the listener, making the character a little too distant.

The other problem is that the story seemingly wants the listener to not know who to root for as a new companion. It doesn’t do this by making all of the candidates equally appealing, however, but by making all of the candidates equally unappealing. It’s not so much a problem of acting as writing – they range from selfish to dull to buffoonish, and all are a bit bland. There were two female candidates, and two male, and it took me a while to sort out which ones were which. Making them more interesting as people would have helped Situation Vacant a lot, because as it was, it’s about a group of characters the listener doesn’t care about competing for a prize that seems out-of-character for the Doctor.

The story wants to throw the listener for a curveball, however, and we learn things about the candidates that weren’t apparent from the initial set-up of their characters. There comes a point near the end, though, where this feels a bit ridiculous and wearying – how many twists can one story have? The reason for all these twists is explained in-story, but that still doesn’t stop them from feeling overdone by the time the last one rolls around. The twists also mean that even by the end of the story, the listener still has absolutely no feeling for the one actually selected as a person; this will have to wait for Nevermore and beyond to develop.

The Doctor judges the competition by having the potential companions assist him in investigating first a series of disappearances in a hotel and then giant robots running rampant in London. These plots never become interesting or unusual in any compelling way, however; they’re both pretty flat and uncomplicated. There is some weirdness in the set-up of the companion competition that is interesting, but since it seems to be part of an arc plot for the season, the Doctor just brushes it off and says he’s sure they’ll find out what it means later, which feels somewhat contrived.

The guest cast to the story is adequate: no-one really stands out, but no-one is bad, either. Of the companion candidates, I think I liked James Bachman as Hugh Bainbridge the best, who made his character both a bit of a doofus and someone with an inner resolve. Shelley Conn, Joe Thomas, and Niky Wardley didn’t do much to differentiate from one another. Barnaby Edwards’s cameo as Refshaw was pretty fun, though. Paul McGann’s performance was a bit lacking here, sounding uninterested and uninvolved with the proceedings. Part of this was presumably due to the twist about the reason for the competition, but that doesn’t help the fact that the listener is left with no character to be strongly involved with.

Situation Vacant seems to want to be a light-hearted season opener in the vein of New Earth, Partners in Crime, and The Eleventh Hour, but the humour often doesn’t come off, atypically for Eddie Robson. There were some good laughs in the second half, mostly at the expense of companion candidate Juliet Walsh. Jamie Robertson’s music tries to reinforce the “comedy” with some over-the-top cues that scream “this is funny!” way too hard, which doesn’t help. (Speaking of the music, Nicholas Briggs’s new mix of theme tune has changed it from atrocious to boring. I’m not sure which is worse.)

This evaluation feels repeatedly negative, but that’s not quite accurate. Most aspects of Situation Vacant aren’t bad… they’re just average and dull. But though that doesn’t make for awful listening, it does make for tedious listening, and this experiment at introducing a companion – though perhaps praiseworthy in its originality – ultimately became a chore to listen to more than anything else.